Home » Centrovoices » Letras » Pride and Courage: Camila's Plea & the Last of the Borinqueneers

Pride and Courage: Camila's Plea & the Last of the Borinqueneers 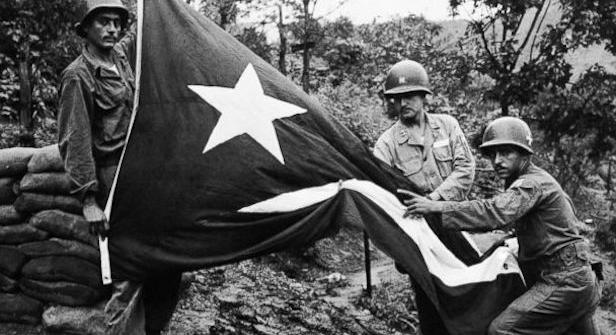 Camila felt her heart racing as she stood up and walked to the microphone. She walked hand in hand with her daughter Melita. It wasn’t like her to speak in public, in front of strangers. She had seen politicians using megaphones and microphones when they came to Naranjito begging for votes. They always looked so distant, so señorial. Now it was her turn.

She had to speak out. She had traveled all night and most of the morning to attend the meeting in San Juan. The governor had ordered for them to be provided with any assistance they needed but these gestures tended to be more symbolic that real. So, Camila and her daughter walked for hours to attend the meeting. She forced herself to speak.

“My husband is working in a farm in Michigán,” stated Camila almost as if explaining why she was alone with her daughter.  “He is doing his duty for us, for his family and his country.”

“Mario, my only son, is in Korea. He only wanted to do his duty. He is there for us, for his country. Now they tell us that he is a coward, that he refused to fight. They say the same about your sons, husbands and fathers. That is why you are here. But we know better, they are not cowards. They are our men, and they are brave men.”

The over two-hundred women in the audience nodded their heads in approval, some clapped, other said, “Sí son valientes!” A chant started to grow louder and louder. “Let them fight, let them fight.”

Camila felt Melita’ sweaty hand in hers and felt at ease.

“We rather see them dead, killed in the fields, covered in honor, than to return with the stigma of cowardice. We demand they let them return to the battlefield and prove they are not cowards!”

That was but a piece of a long speech among many. But that was the headline the island’s newspapers chose. “Preferimos verlos muertos que en deshonra.” “Mothers and Daughters of Soldiers Accused of Cowardice Demand they Are Returned to the Fight”

Two days later, the whole regiment received copies of the island’s papers. The declarations lifted the spirits of the ninety Puerto Ricans awaiting court martial for cowardice before the enemy. Some smiled and laughed, some wept.

Sargent Camacho read out loud: “Doña Camila de González from Naranjito led the meeting…Corporal González, is that your mother?”

“Yes, she is sergeant, she is my mother,” said Mario.

“She is a brave woman son, you should be proud.”

Mario and the other soldiers had felt isolated. They had feared they would not be looked upon as men anymore. They had feared no one would believe their story. How could they face their mothers, their wives, their children? How could they return to their communities? Communities so small and close everyone knew each other. Now they knew they were not alone. Relatives, friends, strangers, everyone was behind them. They were not alone.

Chapter 10: The Last of the Borinqueneers

Camacho and González sat anxiously on the first of two rows of chairs in a cold room in Korea. They were the only non-commissioned officers in a group of twenty-two men going through a court martial for cowardice before the enemy and refusal to obey a superior’s order.

The prosecutor had presented his case and called for these soldiers to receive the maximum sentences possible. An example had to be made lest these acts spread throughout the whole U.S. command.

The defense counsel, Lieutenant Stevens, disagreed. He approached the five members of the court and spoke to the military judge directly.

“Sir, we have a tendency as Anglo Saxons to consider these people the same as ourselves. Actually, they are Latin American in temperament, not war-like but easy going.”

He pointed at the men.

“I have been with these men since December of 1951. My experience as a junior high teacher prepared me to deal with them. They are emotionally equivalent to the child in junior high. As such, I urge you to think of them as people with a twelve-year-old emotional level which definitely must not be led in the light of continental troops. I truthfully believe you must consider these people not as continental but as Puerto Ricans. We should show them mercy, the mercy that a benevolent father shows to his children, even, no, strike that, especially when they are weak.”

The members of the tribunal nodded their heads in agreement.

González stood up and interrupted the defense counsel as he was about to continue.

“Sir, that is nonsense. We have proven who we are. The lieutenant doesn’t speak for us. We are men and we will be treated like men. Try us like men!”

The military judge ordered him to be seated. He remained standing. Camacho, now standing next to him added:

“You did not treat us like men in the battlefield and you are not treating us like men here. We are not your children! We are men.”

“Very well then—you will be treated like men. I instruct the members of this court to disregard Lieutenant Stevens’ comments and find these men fully capable and fully responsible for their actions.”

The court found all the accused guilty of willful disobedience of a superior officer’s command to return to a forward position and misbehavior before the enemy by running away. Most of the men received two-years in military jail sentences, González and Camacho were sentenced to five years in prison. The sentences also included total forfeiture of pay and dishonorable discharges.

As the sentences were read, each man was taken away by military police. Captains Jackson and Cronkhite, who had been called as witnesses by the defense, felt deeply ashamed. They knew what these men had endured on the battlefield and under DeGavre’s racist policies. They knew these men had fought bravely until it was no longer possible. They knew the Borinqueneers were brave men. As the first of the men walked by them, the captains stood in attention and saluted the men.

Camacho was the last one escorted out of the room.

The captains watched him walk with his pride and courage still intact, conducting himself with the outmost dignity.

He sat in the back of a truck like he had done hundreds of times, still leading his men, and peering through the flapping green canvas.

As the truck disappeared in the Korean fog Jackson told Cronkhite, “There goes the best Puerto Rican soldier…victim of the greatest act of injustice.”

© Harry Franqui-Rivera. Published by permission in Centro Voices 24 May 2017.