Home » Centrovoices » Letras » The Rat-Tat-Tat of the J and M Train: An Interview with Richie Narvaez

The Rat-Tat-Tat of the J and M Train: An Interview with Richie Narvaez 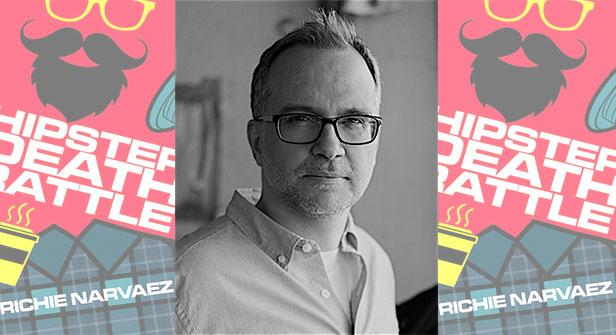 Editor's note: This interview is the 14th in a series that will focus on contemporary Puerto Rican authors. To read the previous interview with Anjanette Delgado, click here.

Born and raised in Williamsburg, Brooklyn, with parents from Ponce and Corozal, Richie Narvaez is the award-winning author of Roachkiller and Other Stories. His work has been published in Latin@ Rising: An Anthology of Science Fiction and Fantasy, Mississippi Review, Pilgrimage, and Tiny Crimes. He served as president of the Mystery Writers of America, New York Chapter, and as artist in residence at the Morris Park Library in the Bronx. His debut novel Hipster Death Rattle will be published by Down & Out Books in March 2019.

Ivelisse Rodriguez (IR): In your new novel Hipster Death Rattle (2019), hipsters are murdered by a bicycle-riding vigilante. One death of a hipster is described as, “Cat glasses slipping, the hipster mouthed one word: ‘Fuck.’ Or it could have been ‘Fleek’.” I had to chuckle here and at various points throughout your novel. I love how you blend humor in a murder mystery. As an aesthetic choice, why blend these two?

Richie Narvaez (RN): Well, I had originally intended to write a book with a noir, downbeat ending. But as I was typing along, the characters were cracking jokes and funny things were happening, and I realized that is because this is a New York City story and New Yorkers are funny, sarcastic people who use humor to deal with living in what is simultaneously the greatest city in the world and one of the most awful.

Also, in trying to say something about a difficult subject, I had to wonder: How can I, lowly, content-providing writer person, possibly push for change? How can I make possibly anything happen? How can I get anyone to pay attention? And it has always been that a spoonful of sugar—of humor—helps the message go down. Soapboxing turns people off and tends to preach only to the converted.

Is humor enough to reach a wider audience and get people thinking, get anything happening? I don’t know. But it’s in my skillset, and I thought it was worth trying.

IR: You take on the issue of gentrification in your novel. You bring up multiple perspectives about it—one is that it is an insidious occurrence where low-income people are pushed out of their homes. You also raise the notion that neighborhoods just inevitably change in that the ethnic groups that inhabit it shift over time. If the latter is true, why do you think that gentrification is presented in such a negative light?

RN: Yes, I try to show different perspectives using different characters. That neighborhoods inevitably change is of the antagonist’s—who is in real estate—and partially Tony’s—the lead protagonist—cynical, uninformed view. It’s unfortunately often given as a popular excuse for gentrification, but it’s a wrongheaded myth. For Tony, it’s because he doesn’t want to get emotionally involved and see the truth. He doesn’t, but his ex-girlfriend Magaly does. And she’s working to stem the tide, but sometimes she feels the cause is hopeless.

But, yes, while it is true that neighborhoods change, people move in and out, that’s not what gentrification is about. It’s different than that. It’s not, We’re moving on up to a deluxe apartment in the sky, or I’m tired of this view, let’s try a new one. Gentrification is not voluntary. It is insidious.

You live in a place for a generation or two or three. You make it a home. But in that time, no corporations come in and invest, and the city government just ignores the neighborhood. And then suddenly some people move in who corporations do care about, and the city government suddenly pays attention. And you’re there, thinking, Oh, look at the new stores and new cafes. For me? But it’s not, you can’t afford to go to these new places, and then suddenly you notice your property tax or your rent has rocketed into the stratosphere, and you and your family who have lived in this place for so long have no choice but to pack up and leave. You’re displaced, pushed out to make way for the more ideal consumer.

And at a cultural level, gentrification desolates the identity of a neighborhood, which is one of the catalysts of the plot. So you may have people moving into a neighborhood because they admire its character, its aesthetics, its local flavor, but in the process of gentrification, those things get erased or atrophied, shunted to corners leaving only mysterious signage and cute pictures for the tourists.

IR: Throughout the novel, the protagonist Chino (Tony) describes Williamsburg, names the streets and indicates what was once in a locale and what is now in its place. I was struck by this as it seemed to me that this was a way to show the history of Williamsburg and a real knowing of the neighborhood. The naming also seemed to function as a way of owning Williamsburg. As a Puerto Rican neighborhood, what is lost for Puerto Ricans if Williamsburg is overrun by hipsters?

RN: Sadly, it’s pretty overrun already. But there are still Puerto Ricans in Williamsburg. They are hanging on in pockets, pushed into tightening corners. There are blocks that are so Puerto Rican it’s still like the 1970s.

For many Puerto Ricans who came to New York in the 1940s, ’50s, and ’60s, Williamsburg was one of those neighborhoods that was ready to change hands. The Germans, the Irish, the Italians were packing up to the suburbs—some for so-called “white flight,” no doubt, but they chose to go. Los Sures, the Southside, became a new home for the Puerto Ricans. For some, they thought of it as temporary. The plan was, once you make that million, you fly back to Cayey, and buy a big house.

But for many others, and I think for their children, the people of my generation, this place was home. This is where you lived; you loved, laughed, and died along these streets, with Manhattan skyscrapers as the backdrop on one side and the steel and stone Williamsburg Bridge on the other, and the rat-tat-tat of the J and M train all day long.

The crazy fact is that gentrification echoes the history of displacement that links all Latinxs, a history of losing home, getting kicked out, and much, much worse. What’s lost for Puerto Ricans is not just home, it’s that American Dream—Fantasy, really—that so many of them, people like my father and mother, believed in, the idea that this pattern was ever going to change, that they were ever going to be taken seriously as people by the ones in charge.

Keep in mind there’s still a large and strong population of Puerto Ricans in the Bronx, but now gentrification has its Sauron eye on the Boogie Down. We all use to think the Outer Boroughs were too tough for the Manhattan folks, that none of them would ever want to live out where we live. But that stigma is gone.

And thanks to the policies of our governor and our current and last few mayors and local reps, it’s probably going to happen, a gentrification bomb that pushes all the black and brown people and most of the poor out. Maybe in five years, we’ll all be living in Hartford.

RN: Definitely! Jesús Colón, who has always been a guiding spirit for me in my writing. The way he writes about New York, as an outsider with a journalist’s eye. And there is melancholy in there with a mischievous quality that, if I may be allowed a sweeping generalization, is a large part of the Puerto Rican cultural character.

The father of Puerto Rican crime fiction is Edwin Torres—the judge, not the poet. You know, Carlito’s Way and After Hours. His characters are criminals, sure, but they aren’t just the stray mugger or graffiti artist thrown in for decoration in other books. They’re the whole book!

A chunk of my book takes place in PR. Now I was born and raised in Brooklyn, so I’m a Nuyorican through and through. My idea of the island is filtered through long summer vacations and my parents’ memories. My mother loved to recite verses and the writer who approaches her view of PR to me, Julia de Burgos, is Puerto Rico to me, and so I reread her a lot as I wrote that section of the book.

And then the great god Pedro Pietri! I was very lucky to get to meet him and talk to him a year or two before he passed away. Now his writing—that’s the way you mix humor with the message. So sharp!

IR: In thinking about the future of Puerto Rican literature, what would you like to see more of?

RN: I’ve been seeing so many Puerto Rican and Latinx writers do sci fi and magical realism or YA that now I would love to see more literary realism, stuff like We the Animals by Justin Torres. Like a book by you. Love War Stories is terrific. Now I want to see your novel.

I would also love to see more narratives about Hurricane Maria and its aftermath. Not only what happened and is happening in Puerto Rico, but also about the journey for all those people who were forced to flee and how they are coping.

Since 2017, The Mayor of Media and Entertainment (MOME) has spearheaded One Book, One New...
Love is Violent: An Interview with Anjanette Delgado

Editor's note: This interview is the 13th in a series that will focus on contemporary...
7 New & Forthcoming YA and Children's Lit Books for Young Puerto Rican Readers