Home » Centrovoices » Letras » When Creases Are Not Enough: An Interview with Michael Mejias

When Creases Are Not Enough: An Interview with Michael Mejias 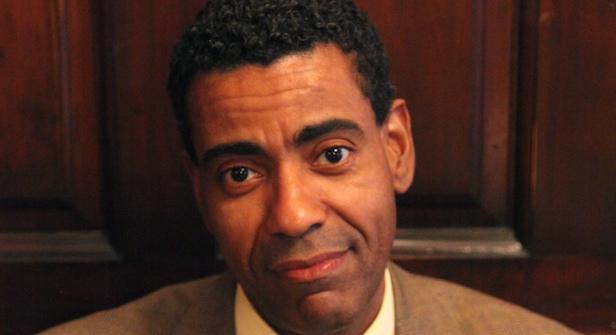 Editor's note: This interview is the first in a series that will focus on contemporary Puerto Rican authors. Michael Mejias is a playwright and theatre artist whose first full-length play, "Ghetto Babylon", was awarded the 2012 National Latino Playwriting Award (an excerpt from the play can be found below). Mr. Mejias is also co-founder of the Dramatic Question Theatre (DQT), a tiny non-profit committed to developing and presenting plays written by its member-playwrights; other playwrights of color; plays written by women; and plays that deal with race, culture, and class in ways that challenge the familiar common ground.​

Ivelisse Rodriguez: Who are some of the Puerto Rican playwrights who have influenced your work? How would you situate yourself within this literary tradition?

I’m grateful to them for simply existing and writing plays that get produced in New York City and across America. These playwrights fill the space created by the systemic absence of Puerto Rican playwrights. Whenever I get to see a play by a Puerto Rican playwright, I feel like I’ve spotted a unicorn—it’s so very rare an occurrence; thus, we must classify these playwrights this way: precious, in the way the rarest stones and gems are precious. Their plays hum and holler in both the major and minor keys of my familiar; and, in doing so, provide proof of life. My life. And, isn’t that what plays are supposed to do?

Your question speaks to tradition amongst Puerto Rican playwrights. That challenges me, since, at its most basic, tradition is practiced through regularly bearing witness. So, tradition requires regularity. Now, consider this: There is no time in the approximately 265-year existence of our American Theatre when Puerto Rican playwrights were produced with regularity. In fact, according to a Dramatists Guild report, playwrights of color write less than 4% of plays and Puerto Ricans write less than 1% of the plays produced in this country. So, if tradition requires regularity, but there is no regularity, how do we both birth and maintain a tradition? The more detectable tradition is one of systemic exclusion. By design and practice, Puerto Ricans do not exist, on a regular basis, in our American Theatre.

Under these circumstances, as an aspiring Puerto Rican playwright, you bear witness to the plays regularly produced by our American Theatre; and, mostly, these plays are written by O’Neill, Miller, Williams, Odets, Wilder, Inge, Albee, Shephard, Mamet, Simon, and Wilson (Lanford, not August). Now, there’s nothing wrong with this; after all, these men are all master playwrights. Logic dictates, however, that the intertextual influence on your work will come from what you’ve seen and read. So, what you adopt will be from them. And, if this is true, then aren’t you part of their literary tradition? If so, is that a problem? If not, isn’t that the same as saying we don’t need a Puerto Rican playwriting tradition? If you are a theatre-going Puerto Rican, you have to dive deep to see yourself in their work. After a while, it’s true, you get good at seeing yourself in the faint creases of their dramatic imagination. The danger with that, of course, is that sooner or later, these creases become enough; and, eventually, they become plenty. 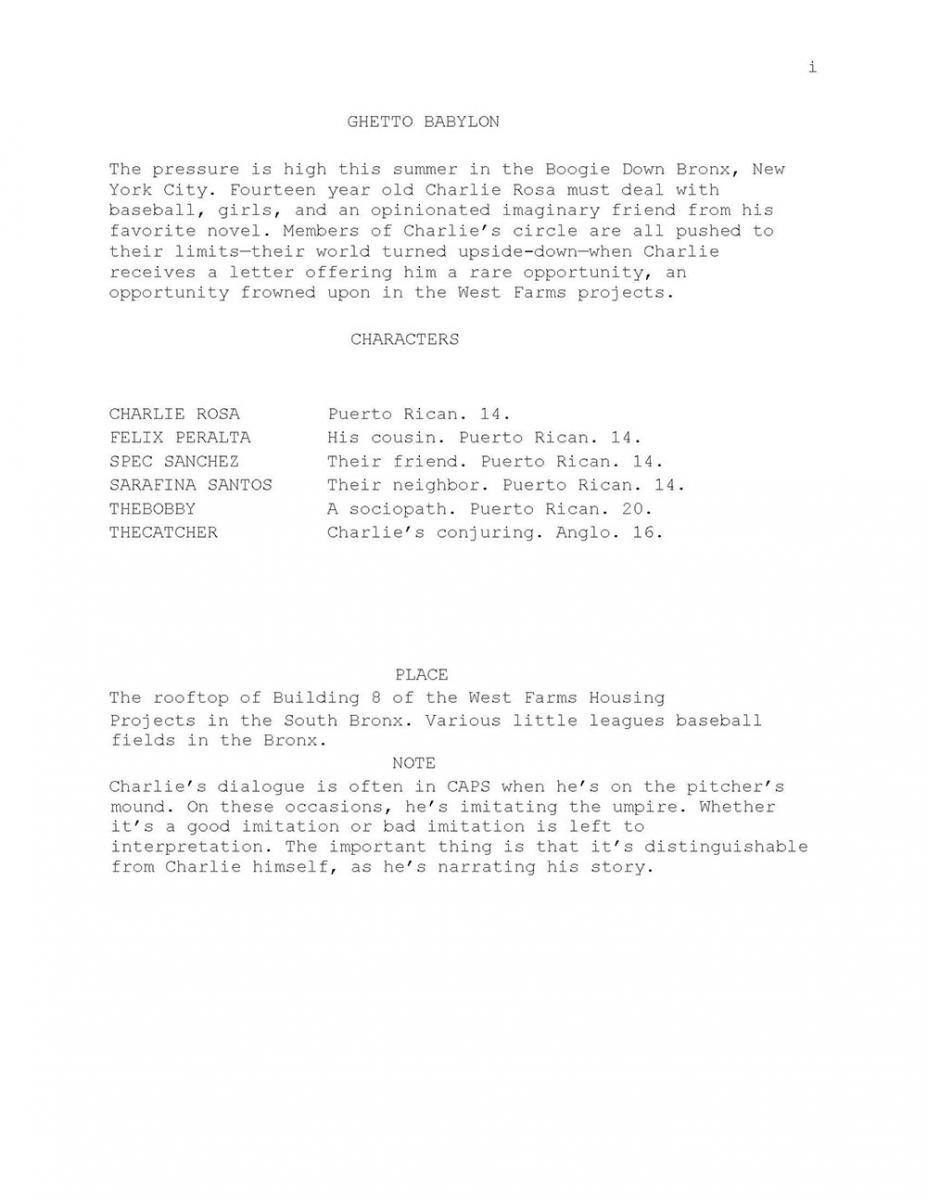 IR: René Marqués’ The Oxcart, a seminal Puerto Rican play from the 1950s, describes a now familiar tale of (im)migration—of moving from one’s nation to the mainland US. In your play Ghetto Babylon, the protagonist Charlie Rosa questions whether to embark on a markedly different “migratory” experience. For the children of (im)migrants, education becomes their journey of leaving. How is Charlie’s story of leaving his Puerto Rican enclave in the Bronx and getting an education at Exeter, one of the nation’s most prestigious boarding schools, similar to tales of (im)migration?

MM: For me, what jumps out first about these two plays is how they each, in their own way, pit the concept of “home” against the concept of “a better life.” Whether it’s The Oxcart or Ghetto Babylon, home is a stand-in for what’s already been defined as acceptable by the community, even if it also means living with violence or in squalor. Conversely, the concept of a better life represents an indictment of home in ways only blood can reconcile.

In The Oxcart, you have protagonist Luis’ paradoxical attempts to leave home for a better life. For Luis, the concept of home isn’t informed by ancestral geography as much as it’s informed by his ambition. So, he packs the oxcart with his family and few belongings and heads toward the better life he will undoubtedly have in San Juan. When time proves the move a mistake, Luis moves the family to the South Bronx, where he finally finds the life he sought. But this good fortune is short lived when tragedy strikes, and the family finds itself back in rural Puerto Rico, in both financial and spiritual ruin.

In Ghetto Babylon, you have Charlie so psychologically paralyzed by having to choose between these rivaling concepts that he’s conjured the hero of his favorite novel, The Catcher in the Rye, to help him sort things. Is he honoring his mother’s memory by staying in the home she made for him or by embarking on the journey they agreed he’d go on? Both choices require Charlie, like Luis, to pay physical and emotional tariffs, and these are payments Charlie is often unwilling to pay. It’s this unwillingness that puts him at odds with absolutely all the people, places, and things in the play. It’s only when Charlie is willing to make such a payment that he can move forward in his life.

So, both protagonists have to face-off against the following question as it pertains to home: Do I stay or do I go? Both decide to go. And, both pay a blood tax.

IR: As with many (im)migrants in literature, Charlie does not have a realistic sense of what is forthcoming. Once Charlie gets to Exeter he will have to reimagine himself as poor and as a minority. In terms of narrative choices, why does he go forward blindly to this new world like a (im)migrant?

And, one last thing: let’s take the year 1977. In just that year, Charlie had to get through, amongst other things, the Blackout and the Summer of Sam. Charlie got through 1977, man! This is what I’m getting at: After the South Bronx, after 1977, Phillips Exeter Academy isn’t that scary to Charlie. It just isn’t.

IR: Ghetto Babylon is in conversation with The Catcher in the Rye to the extent that “The Catcher” shows up to exhort Charlie to go to Exeter. In The Catcher in the Rye, protagonist Holden Caulfield wishes to be a catcher for those going off the edge. So for Charlie, staying in the Bronx would be “a going off the edge.” This is a different type of exodus, one where Charlie has to go alone, one where he literally leaves his community behind. We know the story of the (im)migrant who moves to an enclave in another land. What is then the story of the individual who separates from his/her community?

MM: Ghetto Babylon is in conversation with The Catcher in the Rye to the extent that it is the story of the individual who separates from his community: Holden is thrown out of Pencey and before that, he’s either been thrown out or left several boarding schools. He’s a guy at odds with his community. So is Charlie, whether he knows it or not. And whether he admits it or not. The second he’s accepted into Exeter, on some level, he has to look in the mirror and admit he’s different in ways that make him attractive to other communities, in ways everyone he knows and loves will never ever be. In fact, since Charlie can’t admit it, not even to himself, he needs to conjure TheCatcher to help him get sorted out. Think about that for a second: He needs to make up a person to talk this through with him. In light of this, you might already consider Charlie separate from his South Bronx community. So, the basis for the conversation between the two, between Charlie and TheCatcher, is more about having the courage to separate from community, and why that’s best for Charlie.

IR: El Teatro Campesino started in 1965 by Luis Valdez, the Puerto Rican Traveling Theater started in 1967 by Miriam Colón, and Pregones Theater founded in 1979 by Rosalba Rolón, Luis I. Meléndez and David Crommett are all Latino/a based theaters with a particular aesthetic and interest in telling the stories of Latinos/as. You are a founding member of the Dramatic Question Theater. What elements from these theatres helped in the formation of your own theater? What direction do you hope Puerto Rican theatre will go in in the future?

MM: The founding members of the Dramatic Question Theatre are all former members of the Professional Playwrights Unit of the Puerto Rican Traveling Theatre. We wanted to work together to develop and present our plays. So, we formed our own 501(c)(3). We borrowed some of the unit’s methodologies for new play development and also borrowed from the PRTT with regards to programming; that is to say, we regularly schedule readings and workshop productions of new plays. And like the PRTT, we also produce Showcase Code productions of new plays. So far, the results of our play development and producing efforts include 1 National Latino Playwriting Award, 2 New York Musical Theater Festival Awards, 1 O’Neill Finalist, 2 MultiStages New Works Finalists, 4 MetLife Nuestras Voces National Playwriting Competition Finalists, as well as a host of nominations, including 1 Lucille Lortel Award for Outstanding Play, 1 Drama Desk Award for Best Play, and 1 John Gassner Award for New Play. And, in doing all of this, the DQT has furthered the career of both Puerto Rican playwrights and playwrights of color.

In terms of the future of Puerto Rican theatre, I’d like to see more of it, for starters. More plays written by Puerto Ricans produced in New York City and across the United States.

I’d like to see small groups like DQT become feeders to our Latino Theatre and mainstream theatres in New York City and across the United States.

I’d like to see the 5 million Puerto Ricans in the U.S. support our Latino Theatre.

I’d like to see Latino professionals, from all walks of life, utilize their leadership, business, and management skills to support our Latino Theatre.

I’d like for all people to get down with this simple and delicate truth: Our Latino Theatre is our American Theatre. Punto.