Home » Centrovoices » Letras » The World of the Afro-Puerto Rican: An Interview with Dahlma Llanos Figueroa

The World of the Afro-Puerto Rican: An Interview with Dahlma Llanos Figueroa 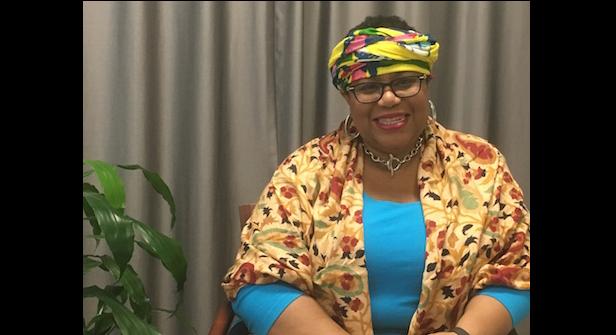 Editor's note: This interview is the fifth in a series that will focus on contemporary Puerto Rican authors. To read the previous interview with Noel Quiñones​, click here.

Author bio: Ms. Llanos-Figueroa is a novelist, memoirist and short story writer whose work is grounded in the Puerto Rican communities on the island and in New York City.  Her longer narratives, though universal in nature, are heavily influenced by West African mystical symbology and 20th Century Latin American magical realism, while her shorter pieces are grounded in urban realism. Her novel, Daughters of the Stone, was shortlisted for the prestigious 2010 PEN America Bingham Award. She has been included in the following anthologies: Breaking Ground/Habriendo Caminos, an Anthology of Puerto Rican Women Writers in New York 1980-2012 and Latina Authors and Their Muses among others. For a full list of publications please refer to her web site.

Ivelisse Rodriguez: “Here is a novel you’ve never read before,” Cristina Garcia proclaims in a blurb for your first book Daughters of the Stone (2009). And indeed, she is right. Tell us about your book and what makes it distinct. Why did you want to write it? What did it mean to you to write it? What is your larger project/goal?

Dahlma Llanos Figueroa: I wrote the novel because I felt that the world of the Afro-Puerto Rican was absent in the literature of the United States, certainly in the literature that was presented in the schools or reviewed in the press. In my experience, Piri Thomas’s Down These Mean Streets was the first novel that addressed the existence of the Afro-Boricua in the U.S., and it was an incredible achievement at that time. But even with all its merits, that novel represented one version of our reality. The totality of the Afro-Puerto Rican life experience and community, like any other cultural group, went much further and was a much more complicated construct than could be addressed in one novel. I found that, in general, the black characters created by the media were treated as addendum rather than central figures. Theirs was a world of supplementary existence rather than one of primary agency or universal humanity. The media images of Latinos were olive-skinned, stereotypical, and absent of any of the dignity and humanity of the world I saw around me. I wanted to break that stereotype and start from the beginning, in Africa, because I wanted to write about the entire journey of my people from West Africa to colonial Puerto Rico to urban America. Now that I look back on it, that was an amazingly broad undertaking, especially for a debut novelist. If I had known then what I know now, I might have started with a less ambitious goal. My intent was, and continues to be, giving face and voice to a community that has been, at worst, silenced or, at best, ignored. Recent episodes in our history make that erasure crystal clear.

DLJ: In Daughters of the Stone I was focused specifically on the relationship between mother and daughter. Skin color gradations are noted in description but aren’t central to the narrative. In ‘A Woman of Endurance’ (unpublished manuscript), these racial distinctions become central to the plot and the development of several of the characters. The physical appearance of the black women determines their role within plantation society. Mixed-race women (mulatas, jabas, trigueña, etc.) get placed in the hacendado’s home and/or in positions of more responsibility. Darker-skinned women were delegated to the fields or more punishing work. When this paradigm is broken in ‘A Woman of Endurance’, and a cocola previously of the fields is given a position in Las Agujas, part of the casa grande, the social disruptions which ensue can be seen, some would argue, even in today’s racial privileging in our communities.

IR: Five generations of women are the protagonists in Daughters of the Stone. Even though women would have limited power during the majority of the time period of your novel, your female characters wield power. But there is a split between the power exerted in the private and the public spheres. In the private sphere, many of your female characters are very independent in the home; for example, Mati chooses herself over her husband, and Elena walks out on hers, etc. However, in the public sphere, Fela and Mati’s strength comes through the use of magic. Discuss the sources of women’s strength in your text and how it shifts in different spaces.

DLJ: In my research, I didn’t find a significant number of Afro-Boricua women in positions of power in the public arena. I didn’t expect to, considering the historical period I was addressing. My work is based on the society I experienced growing up in rural Carolina. My characters’ strength, whether in private or public spaces, comes from community and from the overriding faith and inner fortitude that comes from African religion and traditions. This belief system informs their daily lives and is the core of the endurance that has helped them survive through the brutality of enslavement. For instance, the presence and guidance of the ancestors is integral to their faith. This system of belief supersedes their daily reality of violence and limited agency. They share their belief with their black communities, and in this way, the private belief system becomes public. But beyond that, white characters begin to gravitate towards that system when their own fails them. In Daughters of the Stone, Doña Sara resorts to surreptitiously sending for Fela when Don Próspero’s illness is beyond the healing of their white doctors. Fela’s power comes from, not only her healing arts, but the unspoken acknowledgement by the white characters that she has a kind of power beyond their knowing. Fela forces the white characters to acknowledge that power and directs it to attaining the goals she has set for herself and her community. 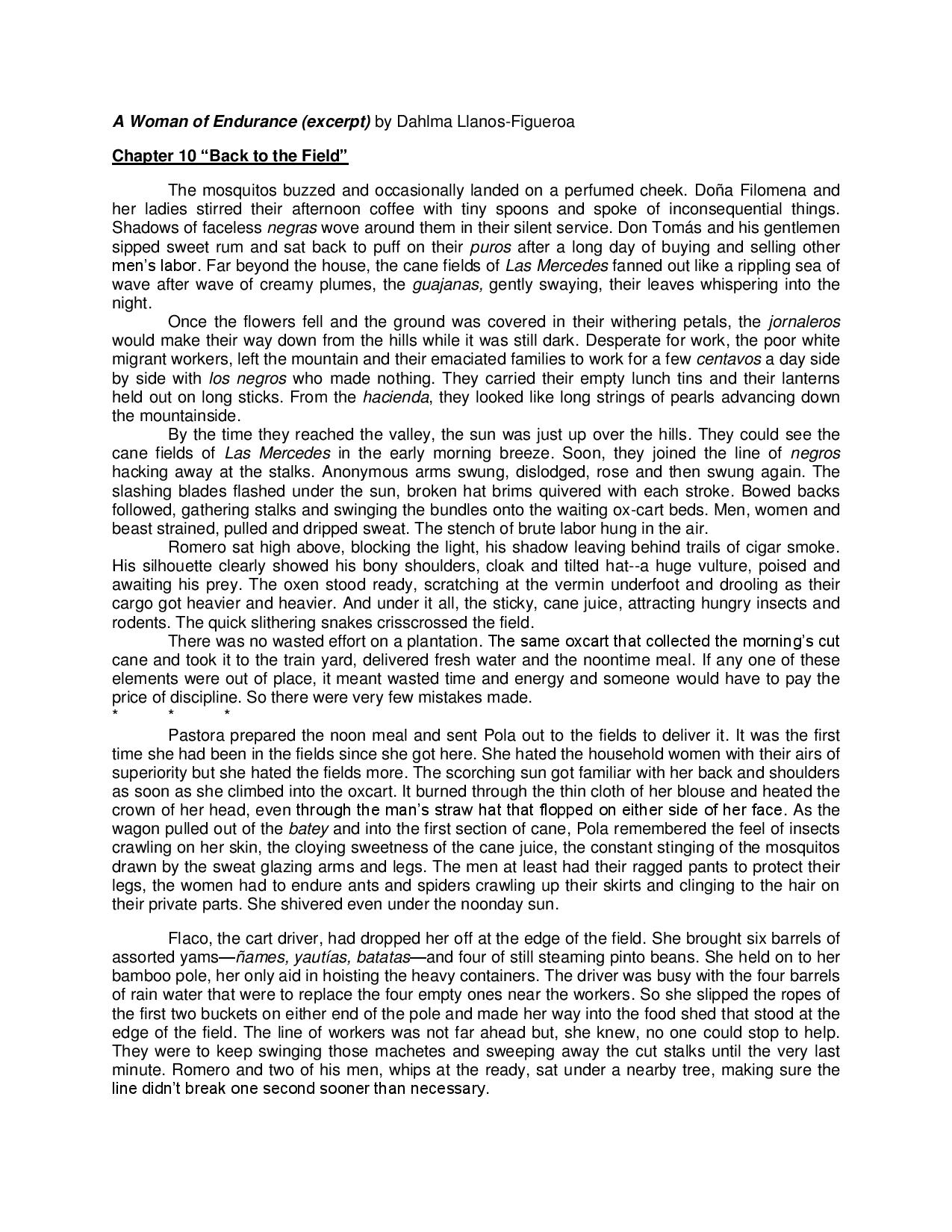 IR: ‘A Woman of Endurance’ focuses on Pola, a slave woman. There is a lot of rich history to explore here as the experience of Africans in Puerto Rico is distinct. What specific Puerto Rican aspects of slavery or blackness do you plan to explore in your next novel?

DLJ: In ‘A Woman of Endurance,’ I have focused on the specificity of Afro-Puerto Rican culture on the more intimate level; that is, its presence in the daily lives of my characters.

Culinary and musical art forms: This is reflected in details such as their cuisine, based on animal parts the masters found unacceptable or available produce seasoned for the African palate. A reticent Pola is seduced into joining a new community by the scents, flavors, and varieties of foods she had never experienced before (gandinga, morcilla, mondongo, ñames, yautía, malanga, etc.) but which have their roots in African cultures. The musical forms and instruments are another aspect of African-based contributions to the culture. Afrodescendientes created instruments using gourds, seeds, animal skins (maracas, bongós, cuatros, guiros, tambores, barriles, etc.) and other materials available to them in captivity. In each case, the characters take the leftovers discarded by the white society and create art forms which are integral to Puerto Rican society to this day.

Religious and curative arts: Traditional African religion forms the core of healing and herb lore (yerba buena, anamú, rompe zaraguey, etc.) and syncretized religious practices are central to many of the characters and the work as a whole.

Larger sociological and historical issues will be much more impactful on my characters in later novels as the narrative broadens from narrowness of plantation life to the wider experience of town life and urban dwelling, and even more so as the characters interface with North American culture as it is super-imposed on the native culture.