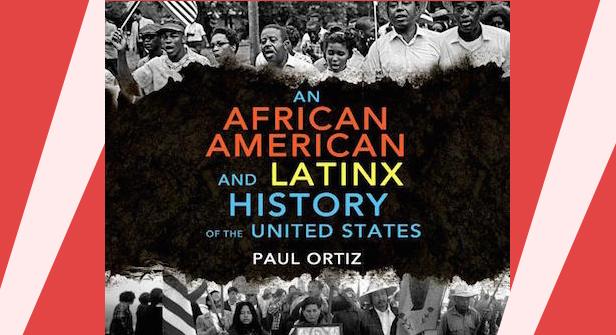 More than 200 years of US history condensed into less than 200 pages (minus the citations) is no easy feat. Howard Zinn’s epic tome, A People’s History of the United States, for example, which begins with the arrival of the Spanish, has been doing a number on the backs of freshman college students since its publication in 1980. Historian Paul Ortiz, on the other hand, offers a more concentrated dose of alternative history.

His latest book, An African American and Latinx History of the United States, was published by Beacon Press in late January as part of its ‘Revisioning American History’ series. The book covers everything from the American Revolution to the present day, and develops the concept of emancipatory internationalism as particularly useful in understanding the struggles of black and brown peoples in the United States. The result is a dizzying historical account in which Puerto Ricans make a few important cameos.

The first such example is an early reference to the work of Arturo Alfonso Schomburg, the celebrated Afro-Puerto Rican historian, writer, and archivist. Schomburg is of course the namesake of the renown research library located in Harlem. In recent years, there has been a revival of interest in Schomburg and the intersections of his identity (Vanessa K. Valdes’ recent book Diasporic Blackness: The Life and Times of Arturo Schomburg explores this topic at length). Furthermore, Schomburg’s mission to affirm the historical contributions of the African diaspora on a global scale informs Ortiz’s project as well.

However, there is still a lot of ground to cover and the concise format lends itself more so to a brisk pace. As a result, the first mention of the Puerto Rican diaspora within the context of the book’s timeline comes in the 1920s, when migrant farm workers were brought from the island to Arizona to work in the cotton fields. Due to the abuses they suffered, however, many of the workers eventually settled elsewhere, after years of protest. Worker exploitation and the resulting labor movement are one of the major themes found in the book. For those interested, Ismael García-Colón adapted his recent article in the CENTRO Journal summarizing the history of Puerto Rican migrant labor in the mid-20th century.

Next, the book makes reference to Mendez v. Westminster, a groundbreaking federal court case decided in 1947. Felicíta Mendez, a Puerto Rican woman, and her Mexican husband, Gonzalo, stood against segregation in California public schools on behalf of Mexican-American families in the state. Centro Voices published an interview with Sylvia Mendez, the daughter of Felicíta Mendez and one of the children denied enrollment by the Westminster Elementary School District. There is also a PBS documentary about the struggle led by her parents. The case would also set the stage for the landmark Brown v. Board of Education case decided by the US Supreme Court in 1954. Coincidentally, Felicíta’s family had relocated to Southern California after the experience of her father, who had worked in the cotton fields in Arizona.

Moving on a couple of decades, the Young Lords, a Puerto Rican activist group of the 1960s and 70s, are credited for their participation in the multi-racial and multi-ethnic Rainbow Coalition led by Fred Hampton of the Black Panther Party. The Young Lords has been the subject of an enthusiastic revival in recent years. Several works of scholarship, among other things, have also reignited interest in their legacy of activism. Darrel Wanzer-Serrano’s book The New York Young Lords and the Struggle for Liberation is one such example (To read a review published in Centro Voices, click here).

Down These Mean Streets, the 1967 bestselling memoir of Nuyorican writer Piri Thomas, is the most explicit reference to afrolatinidad in Ortiz’s book. More than half of a century later, it remains one of the most influential works of the Nuyorican movement. In the book, Thomas relates his difficult upbringing in East Harlem as the son of a Cuban father and a Puerto Rican mother, while also exploring the intersections of his racial and ethnic identities.

There are many more examples of Puerto Rican contributions to the United States to be discussed. If you’re curious to know more, the 7-part series on the “History of Puerto Ricans in the U.S.” by Virginia Sanchez-Korrol, professor emerita, Brooklyn College, is definitely a good place to start (The Centro Cultural Ambassadors Program is another option).

However, the overall purpose, of An African American and Latinx History of the United States is to establish a historical narrative of solidarity among the various racialized subsets of the country. The book is then an opportunity for Puerto Ricans to recognize a much larger struggle to which we have both contributed to and benefited from;  whether it is the enduring legacy of the Haitian revolution in the African American imaginary, the inspiration of the Latin American wars of independence, the diverse labor movements of the 20th century, the African American support for Cuban liberation and abolition, and so on.