Documenting the History of Puppetry in Puerto Rico Through Film 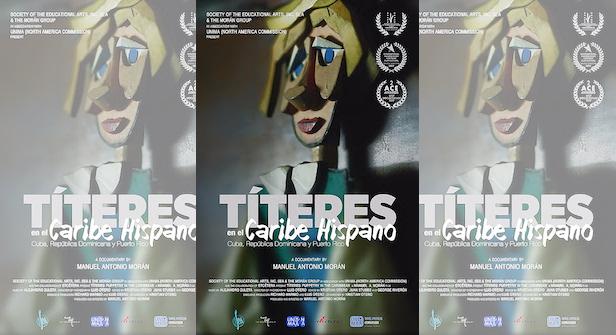 On Wednesday, November 14th, the Center for Puerto Rican Studies hosted a special screening of the film Titeres en el Caribe Hispano: Puerto Rico (Episode 3). The 69-minute film is the third in a series of documentaries that explore the history of puppet theater in the Spanish-speaking Caribbean. Afterwards, Claudia Orenstein of the Hunter College Theater Department moderated a discussion with the filmmakers, Dr. Manuel Moran and Kristian Otero.

The Origins of The Film

Production lasted six years, according to Dr. Moran. After taking a trip to Cuba to conduct research for his dissertation, he returned with a film crew and proceeded to interview many of the puppeteers he had come across during his initial visit to the island. This was followed by trips to the Dominican Republic and Puerto Rico. Titeres en el Caribe Hispano premiered in Spain in 2016. Since then, the film has been presented in the Caribbean, Latin America, and most recently, the United States as part of the inaugural International Puppet Fringe Festival organized by Teatro S.E.A. and held in New York City this past summer.

Due to his personal and professional connections to Puerto Rico, Dr. Moran considers the third episode to be the most complete of the series. During the discussion that took place after the film, he also stated that his interest puppetry dates back to elementary school, when a state-sponsored theatre troupe came to visit. This experience, which would inspire him to pursue a career in the arts, was shared by thousands of young students in Puerto Rico, in both rural and urban settings. From the 1960s onwards, educational puppet theatre had the support of the Puerto Rican Department of Education, the University of Puerto Rico, and the Institute of Puerto Rican Culture. In the film, Leopoldo Santiago Lavandero, or Don Leopoldo, is credited as a pioneering figure in the movement to introduce puppet theatre into the classroom as an educational tool. This first generation of puppeteers in Puerto Rico also received training from world class puppeteers such as George Latshaw, who is mentioned in the film. Latshaw visited the island to lead a series of intensive workshops between 1968 and 1970. By the next decade, there was a growing number of independent theatre troupes in Puerto Rico, which coincided with puppetry becoming a fixture of Puerto Rican television.

The Second Generation of Titiriteros Emerges

Dr. Moran is a member of the second generation of puppeteers that formed in the 1980s. Like many of his peers, he was inspired by the use of puppetry as an educational tool to reach younger audiences. As such, Dr. Moran founded the Society of Educational Arts or S.E.A. in Puerto Rico in 1985. The organization would later establish its headquarters at the Clemente Soto Velez Cultural Center in the Lower East Side of Manhattan, in addition to offices in Florida and Puerto Rico. Through his work as artistic director of S.E.A., Dr. Moran has become a leading figure in the revival of bilingual children’s theatre in New York City.

With the arrival of puppeteers such as Deborah Hunt and Peter Schumann to Puerto Rico in the 1980s, the second generation was also exposed the radical and experimental approach of puppet theatre that engaged with political and social commentary. This shift is characterized by the appearance of giant puppets and cabezudos at protests, as well as an emphasis on working within marginalized communities. Overall, theatre troupes worked toward changing the perception that puppet theatre was only for children, which had been the case for most of the 20th century.

The Legacy of Pura Belpre

While the Puerto Rico episode of Titeres en el Caribe Hispano covers the advent of modern Puerto Rican puppetry on the island beginning in the 1940s, it is Pura Belpre, the first Puerto Rican librarian to work for the New York public library system, who first utilizes puppetry as an educational tool in the South Bronx and Upper Manhattan. Belpre, whose collection of archival materials is housed at the Centro Library & Archives, often incorporated the use of puppets to perform many of songs and short stories she wrote for the growing number of Puerto Rican children that had either come from the island or were born to Puerto Rican parents that had settled in New York City.

The popularity of puppet theatre in Puerto Rico has declined in recent years, which many in the film attribute to the financial crisis, new technologies, and lack of support, among other factors. In response, many of the interviewees advocated for the return of educational children’s programs in schools that feature puppets and the creation of a school of puppetry. Dr. Moran added that more puppet theatres were needed on the island.

Many puppeteers were also impacted by Hurricane Maria. After the film, Dr. Moran explained how S.E.A. awarded small grants and provided materials for puppeteers in Puerto Rico. A gathering for the puppet theatre community which included a screening of Títeres en el Caribe Hispano: Puerto Rico (Episode 3) was also organized six months after the storm, on World Puppetry Day (March 21). Co-Director Kristian Otero noted that some of the interviewees who appear in the film had since passed, thus adding to the emotional significance of the event.

Overall, the Títeres series has spurred interest in documenting the history of puppetry in other Latin American countries as well. Dr. Moran, in turn, expressed that desire that the films serve as a model for future productions.