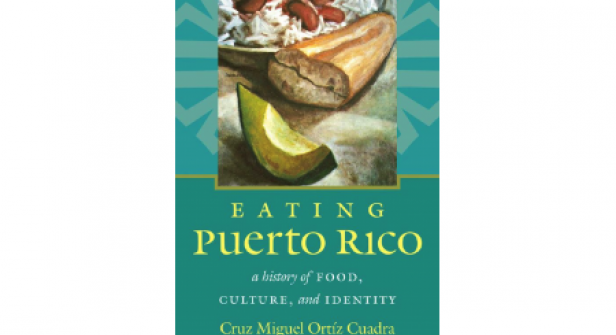 Eating Puerto Rico: A History of Food, Culture, and Identity by Cruz Miguel Ortiz Cuadra is an ambitious book that aims to examine the questions of "...why did we eat what we ate and why do we still eat it...?" (2013: 13). The author attempts to answer these questions by analyzing the socio-cultural context of what people in Puerto Rico ate throughout five hundred years of colonial history. Ultimately, his goal is to explain what people are eating now in contemporary Puerto Rico, thus suggesting a relative degree of continuity. The book is not about culinary recipes (although some are historically contrasted) but about the social relations and meanings given to food and food items within a world economy. The excellent conceptualization of the topic made use of the available literature in the fields of anthropology, sociology, history, linguistics, literature, archival records, and newspapers news. The book is extensively documented and referenced although the endnotes (rather than footnotes) are taxing for the reader. The author provided a wide range of scholarly publications and theoretical positions especially in the "Introduction" and Chapter 7, "Are We Still What We Ate?"

Specific items such as "... rice, beans, corn, cassava, tannier, sweet potatoes, plantains and bananas, yams, pork, beef, and salted codfish" are identified as "core foods" among Puerto Ricans (Ortíz-Cuadra 2013: 5). The book provides an exceptional narrative on how these food items historically changed from "complement" to "supplement" foods. Variables such as social class, ethnicity, race, and gender are addressed throughout the book, thus arguably constructing a "Puerto Rican culinary culture." For example, the discussion of the food items and dishes were associated with the peasants, slaves, agricultural workers, and the urban working class. On the other hand, in the more contemporary food culture and to the other extreme of the class continuum, you find the foodies and yuppies, fusion and nouvelle cuisine, and the non-native upper-class cuisine. Ethnic identity is clearly ascribed to the consumption of cod due to the required Spanish religious observances. The significant African contribution comes across in the chapters on rice, beans, cornmeal, cod, and viandas, which are commonly ignored. The role played by women is paramount throughout the book. It is worth noting the analysis in chapter seven of the contemporary problems especially affecting women: the double shift, an increase in commuting time due to Puerto Rico having one of the highest traffic densities in the world, and the increase in time and frequency devoted to food shopping and preparation, thus contributing to eating more outside the house and eating junk food.

Given the advances in nutritional science, the concept of protein complementarity as it relates to the nutritional benefits of the traditional dish of rice and beans, funche or guanimes (dishes prepared with maize flour) and beans should have been addressed. The combination of beans and rice or maize flour provides the eight essential amino acids that the human body does not produce (Lappé 1991). Indispensable in the preparation of maize-based dishes is the process of nixtamalization, adding ashes or slaked lime (calcium hydroxide) to the maize boiling in water prior to grinding by which pellagra is avoided. According to Coe (2002: 14), Mesoamerican civilization would have not risen without the nixtamalized maize. Therefore, the small number of pellagra cases in Puerto Rico (three cases reported from 1907 to 1912; Watterton 1912: 201) were not caused by "... an excessive dependence on cornmeal in the diet" (Ortíz-Cuadra 2013:90) but by the lack of nixtamalization.

Another nutritional issue that comes across is the use of salted cod as a condiment during the 1940s and ‘50s to add flavor. The consumption of salted cod was minimal: "... 70.2 percent of the families get less than 5, and 37.1 percent less than 2.5 grams of protein per person daily from this source" (Roberts and Stefani 1949:152–3; quoted in Ortíz-Cuadra 2013: 114). Notwithstanding, in the next paragraph it is argued that "El Dr. Pons believes it likely that the large amounts of salted cod fish eaten by the chronically poor in our country contribute to augmenting the number of sick people who display nutritional edema" (Ortíz-Cuadra 2013: 114—emphasis added). The substantive issue is not salt per se or salted cod but rather the continued deprivation of complete proteins during this period.

The chapter devoted to viandas (roots and fruits) pays attention to the cassava, tannier, sweet potatoes, yams, and plantains. Historically, viandas changed their role from primary to a secondary side dish, although their symbolic meanings were and continue to be vital in the understanding of class relations and ethnic identities. Plantains occupied a special position in the formation of a "distinct Puerto Rican nation" as reflected by the first Puerto Rican cookbook , El cocinero puertorriqueño (1859), and its chapter devoted to the plantain (Ortíz-Cuadra 2013: 148). The book correctly relates the pastel or pasteles with the symbolic meaning of gift giving found in the Mexican tamales and the Venezuelan and Colombian hallacas. The Taíno, African, and Spanish contributions are acknowledged. However, it is problematic when the author concludes that "... the mashing of the dough to give it a certain texture and its being wrapped in leaves and cooked by boiling, three features that were constant—then the African element seems especially prominent" (Ortíz-Cuadra 2013: 152). On the other hand, it could be easily argued that the origin of the pastel is Taíno. The mashing technique is identified with the African population without considering that the Taínos did have mortars and pestles in addition to the guayo to grate, allowing them to prepare guanimes. Remembering that the method by which dishes are prepared now is not necessarily identical to how they were prepared in the past, the pasteles dough is grated not mashed—otherwise, it would have been mofongo. Following the Taíno and Mesoamerican technique of wrapping the maize guanime and tamal, respectively, in maize husks, the African influence was to substitute it with the plantain leaf. The preparation of guanimes and tamales follow the boiling technique, which was not exclusively African. Accurately argued, the ingredients used for the dough include a multiplicity of constituents, depending on personal preferences, some of which include tannier, yuca, and pumpkin, which were cultivated by the Taínos.

Beef and pork consumption patterns addressed the urban-rural dichotomy in the early part of the colonial history and could be correlated with social class. The role of meat from the periphery to the center is well articulated by the author. Regarding the present-day situation, however, the reader is somewhat left in a vacuum since the role of chicken, which constitutes the most important source of animal protein in the Puerto Rican diet and part of the Puerto Rican food identity (chicken with rice and chicken fricassee, as noted in the first page of the book), is not given any attention.

The book's translation from Spanish, Puerto Rico en la olla, ¿somos aún lo que comimos? (Ortíz-Cuadra 2006) is excellent. As stated in the book, yuca is the root and cazabe is the bread made by Taíno Indians at the time of conquest (Zamora Munné 1976:43). At times the word cassava is used interchangeably for both, not differentiating cassava the root with cassava bread or cazabe. Within the discussion of cazabe, the reader gets confused with the definition of "catibía" as the coarse yuca flour (Ortíz-Cuadra 2013:126) and later described as the finest yuca flour (Ortíz-Cuadra 2013:131). The coarse yuca flour is called "cosubey" (Álvarez Nazario 1999: 83).

To answer the question "Are We Still What We Ate?" (Chapter 7) the author draws on abundant data to address the relatively recent food habits of Puerto Ricans. This chapter is strongest in the discussion of consumption patterns by social class through the focus on the nouvelle cuisine and the fusion trend vis-à-vis the increase in food costs and salaries. The author mentions the upper-class restaurants from the 1960s and ‘70s that catered to the local elite and tourists, as well as the ones capitalizing on the new cuisine trends and names. Additionally, the author provides an excellent analysis of the expansion of fast food chains and establishments and the structural factors by which Puerto Ricans have adopted and sponsored these. This period of rapid socio-economic change (from 1960 on) is well represented by the increasing number of kitchen appliances, automobiles, private residences, and television sets. Perhaps it was beyond the scope of this book, but the success of this section prompts the reader to wonder about the role played by television—then and now—in influencing dietary choices. Two television stations were established in 1954 and not surprisingly, channel 2 transmitted the first cooking show, La Cocina Frigidaire with Carmen Lydia Fernández, which in turn intersected cooking with refrigerators (Television 2014). What influences have Cable TV Food and Travel Channels had in the contemporary culinary practices, food item choices, and selection of restaurants patronized?

The book contains excellent historical research although it lacks contemporary ethnographic investigation, especially where the author resorts to deductive binary categories rather than utilizing inductive categories when discussing the contemporary preparation and consumption of Puerto Rican food today (Ortíz-Cuadra 2013: 212­–44).

Is there an authentic Puerto Rican food? The title of the book and the analysis of certain food items and dishes suggest that there is. Furthermore, the author starts the exploration of this complex, constantly changing, adaptive and symbolically loaded topic indicating that "... there is the association between food and identity, in this case national identity" (Ortíz-Cuadra 2013: 2). However, distinctions between ethnic identity, ethnic food identity, and national identity are not made. The result is that the author’s use of these terms tends to homogenize the class and race differences, as well as the culinary identities that the author has successfully argued throughout the book.

Ethnicity, nationhood, and their respective cuisines are imagined ideas stemming from comparative and contrast process with the Other. "Talking and writing about ethnic or national food can then add to a cuisine's conceptual solidity and coherence" (Mintz 2002: 109). Following this line of thought, one could easily argue that the book contributes to the creation of that national culinary identity. In a very dialectical way, the fusion, nouvelle cuisine, bistros, and other ethnic restaurants in Puerto Rico reaffirm, even if they do not create, the ethos of what Puerto Ricans are or what they are not. Puerto Ricans, including Nuyoricans, are dynamic, innovative, survivalist and have adapted to and adopted new food items as long as there is some degree of cultural consistency and symbolic specificity:  "The diffusion of items from one culture to another depends upon whether the adopting culture has certain items or practices in its cultural inventory" (Knipe 1995:109).

In a very odd way, this book does not acknowledge the Puerto Rican experience in the mainland and the constant traveling between the island and the mainland. As Ortiz (1994: 6) states, "A melding of new and traditional cooking in many home as well as in food establishments has resulted." Enhancing the Puerto Rican cuisine and culinary experience in New York, Rivera first published in 1993 Puerto Rican Cuisine in America: Nuyorican and Bodega Recipes, thus coining the term "Nuyorican cooking" as an urban phenomenon (2002: x). The Nuyorican influence in the construction of the Puerto Rican ethnic identity has been addressed in the academic literature and perhaps forgotten (Flores 1984; cf. González 1981).

Are food consumers in Puerto Rico today empowered as compared to sixty or onw hundred years ago? Is the decision on what to eat made by the individual or the kinship structure? Or is it influenced by the socio-historical processes of the capitalist world system, as the author suggests? (see Mintz, 1996, 1985; Wolf 2001). Perhaps, the answer will slowly emerge only after doing cross-cultural comparisons based on ethnographic work. For now, the juicy semiotic inter-connection between power and food are just nibbled at by Ortíz-Cuadra.

Watertton, G. C. 1912. Pellagra in Porto Rico. In Transactions of the National Association for the Study of Pellagra, Second Triennial Meeting at Columbia, South Carolina, October 3–4.