Global Miami: Life in the City 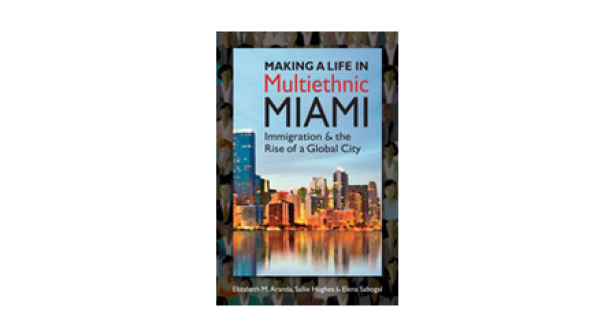 Making a Life in Multiethnic Miami is an important contribution to both the place-specific literature on Miami as well as the wider fields of migration, transnational and urban studies. The authors, Elizabeth M. Aranda, Sallie Hughes and Elena Sabogal, draw on both qualitative and quantitative data, gathered over a period of 10 years with Caribbean and Latin American immigrants from a range of national contexts. They find that migration experience is often marked by trading one form of insecurity for another, and they argue that “migration acts as a prism through which prior forms of insecurity are refracted onto new experiences that carry new vulnerabilities.”

Weighing the physical and socio-economic insecurities prompting departure from the home country against the “ontological insecurity” of life in Miami, the authors trace immigrant agency in response to both global forces and Miami’s locally specific and historically created social field. They find that an important immigrant strategy for easing (if not always resolving) ontological insecurity is through building “translocal social citizenship.” They argue that Miami, because of its position as a “Latino-friendly” global city, is a place especially adept at facilitating this process for some, while they acknowledge and articulate new forms of social, political  and economic exclusion that many new arrivals to Miami encounter.

The introduction and following three chapters of the book weave together the global and local by articulating how the dynamics of late capitalism and neoliberalism have contributed to forming global cities (of which Miami is one), where scores of displaced and undocumented immigrants serve the global elite as these latter engage in effecting transnational flows of capital. These chapters include a detailing of Caribbean migration histories, giving significance to Puerto Rico’s long migration history as a precursor, and they examine the structural violence of neoliberal reforms in much of Latin America and the Caribbean, which created the “environments of insecurity” that propelled many to leave their homelands in search of greater security. They examine as well the socio-legal and economic dimensions of what immigrants found on arrival in Miami, and they trace how these intensified in the post-9/11 years. These chapters focus especially on the class bifurcation of global cities; they look at how immigrants arriving into this context have perceived their socio-economic mobility in relation to both their homeland and Miami, where perceptions of class status are complicated by gender, legal status, country of origin, class of origin and education.

The next two chapters turn to the impact of race and in particular to Miami’s racial history as part of the South in conjunction with Latin American and Caribbean racial hierarchies. The authors trace how racial understandings in Miami have intersected with legal and political structures, privileging some and working to marginalize and exclude others. Referencing Eduardo Bonilla Silva’s scholarship, the authors offer Miami as a site in which to examine the emergence of a hemispheric racial/ethnic hierarchy. They explain race in Miami, where:

“U.S. neoliberal racial projects that take form in immigration policies have positioned Cubans as ‘honorary whites' and Haitians as part of the ‘collective black’ in a system of stratification that not only supports the white racial frame, but assigns in-between categories based on social class, cultural racism and perceptions of worth attached to legal status, reflecting a hemispheric approach to understanding race and ethnicity in the twenty-first century.”  (p. 238)

In the final section, the authors turn to immigrant agency in the development of “trans-local social citizenship” in relation to the home country and in practices of locally specific place-making in Miami. They explain both of these practices as strategies for coping with the emotional tensions and material realities of trading one insecurity for another, and they articulate differences in the degree to which immigrants are able to effect these strategies according to race, class, language, national origin, gender and legal status.

Woven through the analysis are calls for practices for gaining greater social justice in Miami. These include arguments for unionization, immigrant solidarity grounded in civil rights ideologies and a re-imagining of citizenship based in contributions, rights, needs and potentials. Even as they argue for recognition of new forms of citizenship, however, they repeatedly remind their readers that formal legal membership remains crucial to addressing the insecurities of the undocumented immigrant. The authors recognize in the conclusion that the book does not examine in any detail the experiences of those “forced out of the U.S. experience” and the movement by the Dreamers to resist and transform U.S. immigration policy. The final chapter seeks to address this lacuna to some degree, and as it does, it posits fruitful directions for further study.

Writing to this level of social complexity and methodological sophistication is a huge undertaking, which the authors have affected with skill. Their aim to articulate with precision the affective elements of immigrant experience, without losing sight of material conditions and needs, is facilitated by a skillful interweaving of quantitative data sources with participant observation, interviews and focus-group data. For instance, in addition to quantitatively assessing emotional well-being among immigrants to Miami in relation to practices that render feelings of “co-presence,” the authors insert excerpts from immigrant interviews that give examples from individual lived experiences in Miami.

Quantitative and qualitative data also combine to articulate the immense diversity across national origin, race, class, gender, language ability and legal status that immigrants to Miami represent. While recognizing the special place of Cubans in Miami, the authors document experiences and perceptions from Haitians, Colombians, Puerto Ricans, Mexicans, Dominicans and Venezuelans, among other Latin American and Caribbean populations. Extensive analytical attention is given to the Cuban – Haitian divide as the product of U.S. racial projects, through which blacks from poor countries are disfavored in immigration policies. Although intra-national racial divides among Cubans and others are mentioned, racial analysis focuses more consistently on the divergent experiences of Cubans and Haitians, the eclipsing of African Americans in the emergence of Miami as a global city, and the racialization of Miami itself in national public discourse. Including demographic information beyond national-group identity in the qualitative excerpts, and identifying racial identifications in the quantitative sample, would have brought greater attention to racial diversity within nationally identified groups.

Another contribution of this book that must be mentioned is that the authors situate this diversity into the specifics of Miami’s historically created social fields. While Miami, like the rest of Florida, has had a different southern history from the states of the Deep South, Florida shares with these other states a history of deeply entrenched racial segregation and federally imposed civil rights reforms. That these reforms became a vehicle for Cuban empowerment in Miami is an important point, which the authors highlight. Thus, on the topic of Latinos and race in the twenty-first century U.S., Miami (and Florida more widely) stands as an important indicator of the issues to come.

The ambitious reach of this volume almost precludes its accomplishing all. More subtle and provocative interweaving of race, class, national origin and U.S. history is warranted, for instance. And there is no challenge to the strange silence across the literature that has traditionally surrounded representation of the sizable and already class-bifurcated Puerto Rican population of Miami in 1959. But amidst a literature dominated by attention to Cubans and Cuban-Americans in Miami, this book’s efforts to disaggregate immigrant experience in that city with attention to national origin, race, class, gender, language ability and legal status is a refreshing change and much-needed perspective.

Studies of Miami often point to that city as “atypical” in the sense that it has not emerged from an industrial past, but it must be noted that cities of the U.S. South and West, such as Atlanta, Houston, Orlando, Nashville and Phoenix, are all atypical in that sense. And it is such cities that are becoming dominant immigrant destinations. The wide scope and depth of research in this volume thus offers a jumping off point for examination of what the twenty-first century U.S. city looks like.

In brief, Making a Life in Multiethnic Miami, is a significant contribution to our understanding of multi-ethnicity in global cities. It tackles the complex and subtle question of how immigrants experience and seek to address the “ontological insecurity” of moving to such places, and will be of particular interest to students and scholars working to understand the intersections of transnationalism and locally specific place-making in a variety of urban environments. The authors have undertaken an ambitious project and succeeded in giving due attention to the undoubtedly Cuban dynamic of Miami while still complicating that picture by detailing the increasingly diverse and divergent immigrant populations in that city.