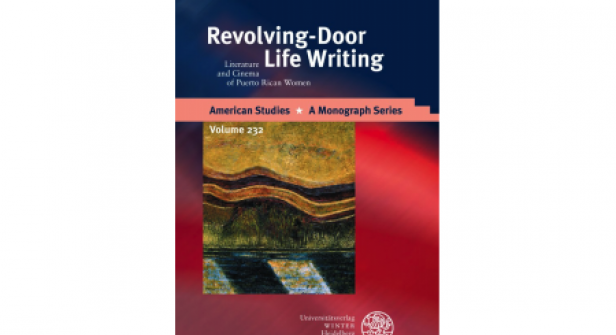 Revolving-Door Life Writing: Literature and Cinema of Puerto Rican Women by Christin Freyer was published last year by Universitätsverlag Winter Heidelberg as part of their monograph series on American Studies. The series is an interesting one as it aims to present an internationalized approach to American Studies, focusing on multi-ethnic and/or global issues across fields of study that pertain to the United States from a peripheral perspective. It follows that Revolving-Door Life Writing presents an analysis of literature written by a minority group within the U.S., Puerto Ricans, more specifically Puerto Rican women writers and filmmakers. The book proposes to look at “tactics of jaibaría” [sic] (non-confrontation) and their role in the birth of a “third space” (Hommi Bhabha) and “mestiza consciousness” (Gloria Anzaldúa) in life-writing texts and films.

Including five novels and only two films, Revolving-Door Life Writing (RDLW) opens with a series of definitions. In her introduction, Freyer is quick to establish key terms  including  revolving-door migration and  life-writing. The former is used to describe the “back-and-forth migratory movement of Puerto Ricans between the island and the mainland of the United States from 1965 onwards,” while the latter is preferred over autobiography due to its elasticity and inclusion of alternate narrative tools, such as film and testimony. Additionally, akin to  creative non-fiction, life-writing is distinguished from autobiography  in an attempt to discuss issues of authorized and hegemonic narratives.

But the term becomes pivotal in Freyer’s overarching implicit hypothesis that most of the characters discussed in RDLW achieve cultural affirmation not solely through jaibaría tactics but also through an examination of their youth. As a genre, life-writing implies a consciousness of self-fashioning at a personal and socio-cultural level.

The construction of the self through various art forms is at the heart of most of the novels discussed. Jaibaría or evasion strategies, permit characters to ‘split’ personalities (i.e. acting), give varying versions of events through multi-genre accounts, or embrace multiculturalism through music. The characters’ eventual awareness of their back-and-forth movement through cultures during their adolescence becomes their main tool in adulthood to develop “mestiza consciousness” and occupy a “third space” in which their hybrid cultures can be  incorporated, according to Fryer.

The book has four chapters, most with multiple subdivisions. Chapter 1 is a short introduction, while chapter 2 provides an overview of Puerto Rican history and culture in order to explain what they refer to as the Puerto Rican colonial status and its relation to migratory patterns to the United States. Chapter 3 aims to define terms such as hybrid, postcolonial, and  transnational identities, and other much-discussed words within the Puerto Rican context, like  transculturation, acculturation, immigration, migration, and jaibaría. Freyer also identifies as Nuyorican; a person living in New York City of Puerto Rican birth or descent, while proposing the term NuRican to define someone of Puerto Rican birth or descent anywhere in the U.S.A. who perceives her/himself as transnational without the need for literal migration. While establishing some of these terms can sometimes prove to be fruitful, this initial sequence of briefly discussed and thus largely unquestioned definitions, followed by a long summary of the history of Puerto Rico and the island’s relation to the United States, often obscures the overall structure and goals of the book.

In a more positive light, the overarching nature of the first half of the book may aid students’ acquaintance with some key terms, especially those with no previous knowledge of Puerto Rico and its often problematized identity as well as migratory issues. Specialists in the field might be tempted to skip this part of the book and pay special attention to chapter 4 and its eight subdivisions, in which Freyer analyzes the works of writers Esmeralda Santiago, Nicholasa Mohr, Marta Moreno-Vega and Judith Ortiz Cofer, and those of filmmakers Frances Negrón-Muntaner and Judith Escalona.

Throughout her analysis, Freyer identifies coping strategies used to deal with identity crises undergone by youth characters when their American and Puerto Rican personas come into conflict. These coping strategies are tactics of evasion or non-confrontation (jaibaría) and are sometimes subdivided into or differentiated as: existentialist jaibaría, one which lacks a simplistic or playful approach; domino jaibaría, when decisions ultimately follow the path of least resistance; and  negative jaibaría, in which a type of social criticism is involved. These subtypes of jaibaría are not necessarily distinct from each other and as only a couple of examples for each are given, the goal of sub-categorization seems lost. A more explicit definition of jaibaría itself and its role in the works discussed would have made a better contribution.

Freyer’s key idea, that “integrated hybrid identity and coming-of-age are intertwined” is best explained in her study of Esmeralda Santiago’s work. Childhood and adolescence are marked as periods in which characters must learn to reconcile societal contradictions, thus linking maturity to the strength needed to embrace a  hybrid  cultural identity. Children and youth in the novels discussed learn not to deny their American or Puerto Rican selves in a home or public environment but to reconcile these identities as their age allows for the development of self-confidence. More specifically, Freyer explains that “Santiago clearly shows hybridity as a state in which cultural identity’s national and ethnic aspects need to be continuously negotiated and balanced according to outward demands and inner needs.” It follows that cultural affirmation is equaled to a gendered sense of independence, more specifically discussed through Santiago’s The Turkish Lover.

The explicit construction of a link between age-related growth and cultural identity and affirmation, in the case of Nicholasa Mohr’s Nilda, is built through the use of imagination and the character’s unawareness of prejudices. Creation and abstraction are presented as a “third space” that houses "mestiza awareness." Furthermore, Freyer proposes Mohr herself as a user of jaibaría tactics in that the writer subverted expectations at the time of Nilda’s publication by refusing to write about stereotypes related to Latinos and instead relate individual experiences. In Marta Moreno-Vega’s When the Spirits Dance Mambo, the main character, Cotito, finds “ethno-cultural strength”  in a concert. Dancing and music become the “embodiment of hybridity”. And in a way similar to that of Nicholasa Mohr, Freyer finds that Marta Moreno-Vega’s “non-transparency” strategy in regards to the role of santería in the novel as well as in her life, is an example of real-life jaiba tactics.

Unfortunately, the identification and discussion of the use of non-confrontation as a key strategy in the development of a strong multicultural identity dwindles as the book reaches its end. Judith Ortiz Cofer’s Silent Dancing is viewed in light of its rich treatment of multiple literary genres for the portrayal of a single event from varied points of view. “Hybridity and transnationalism are mirrored” in her work, Freyer explains, but jaibaría is no longer the main topic. Similarly, while the overall look at transnationalism and identity in the films is equally interesting, jaibaría tactics are only briefly mentioned in the discussions of Brincando el charco by Negrón-Muntaner and The Krutch by Escalona.

From an analytical perspective, the book’s Nuyorican and NuRican divide does not prove particularly useful as it is not clear how the cultural background of one group or the other affects distinctively their use of jaibaria tactics or cultural growth. But editing issues tend to be the most challenging for the reader. The excess of quotations and parentheses constantly interrupt the train of thought, page-long paragraphs are common, transitions between chapters are short and abrupt  and key threads between works are not explicit. There are also instances where Spanish and German texts are not translated into English, affecting language uniformity. The body of the text seems too narrative at times, with a thorough description of the novels’ plots at the cost of a less methodical explanation of the analysis put forth. The six-page conclusion also lacks a final summary of the overall book’s contributions. Finally, the author refers to the work as “thesis” and “dissertation” throughout the text, hinting at the publication of an unrevised PhD project.

Although most of the scholars that would need to be discussed in a study like this, such as Arnaldo Cruz-Malavé, Arlene Dávila, Agustín Laó-Montes, Fernando Ortíz, Juan Flores and George Yudice, are cited at some point in the book, there is no long discussion of Freyer’s contributions in light of these scholar’s works. Furthermore, although the book arguably focuses on jaibaría tactics used by female writers, there is no mention of Josefina Ludmer’s canonical The Tricks of the Weak, which precisely deals with strategies of subversion used by female writer Sor Juana Inés de la Cruz. On discussions about “the one and a half generation” and “hyphenation" to describe cultural hybridity, Gustavo Pérez Firmat’s Life on the Hyphen would prove a productive parallel study, in his case, of the Cuban-American culture and literature. Similarly, the reasoning for the choice of works is weak, and while some authors who were not included are acknowledged, semi-autobiographical works of a multi-ethnic nature by other Puerto Rican women are not mentioned. I specifically missed a discussion of the radically  unclassifiable Erika Lopez. The range of filmmakers could have also been larger.

It is encouraging that Christin Freyer looks at both novels that have entered the canon, such as Esmeralda Santiago’s Almost a Woman and The Turkish Lover, and Nicholasa Morh’s Nilda, and at some that are still to be discussed, like Marta Moreno-Vega’s When the Sprits Dance Mambo. Overall, Revolving-Door Life Writing is a good attempt to deal with issues of cultural identity through literature, an especially good cross of fields since these discussions often take place separately.

© Consuelo Martínez-Reyes. Published by permission in Centro Voices on 22 October 2014.