A History of Puerto Rican/Black Coalitions in New York City 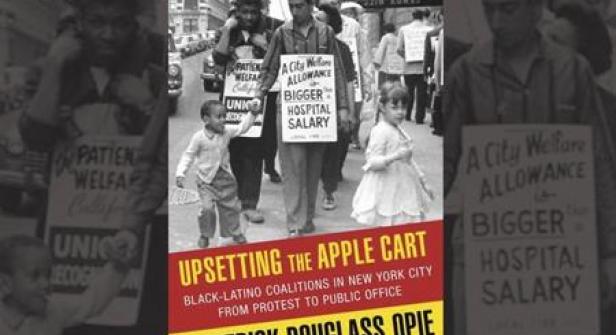 In the middle decades of the twentieth century, New York City’s Black and Latino population increased dramatically. Thousands of Blacks fled from poverty in the Deep South and tens of thousands of Puerto Ricans sought job opportunities as economic restructuring and rural displacement in Puerto Rico generated massive structural unemployment. The newcomers found jobs predominantly in light industry and the racially segmented service sector where low wages, long hours, discrimination, and disrespect prevailed. These shared conditions among Blacks and Puerto Ricans formed the basis for multiethnic worker solidarity, especially in the city’s municipal and private hospitals where federal laws protecting workers did not apply. Beginning with this vital historical context, Frederick Douglass Opie in Upsetting the Apple Cart: Black-Latino Coalitions in New York City from Protest to Public Office takes readers on a journey through three decades of Black-Puerto Rican coalitions that achieved significant improvements in labor conditions, challenged institutional racism in education and reformed higher education curricula, and produced electoral victories for Black and Puerto Rican candidates throughout New York City, including the election of David Dinkins as the first African American mayor.

In Upsetting the Apple Cart, Opie intertwines oral histories with archival research to uncover many of the grassroots mobilizations, protests and strikes, and electoral strategizing based on common cause throughout New York City’s Black and Puerto Rican communities. The coalitions, comprised of varying blends of labor leaders, students, community organizers, mainstream and Left political leaders, and elected politicians, did not always achieve their goals. On the whole, however, Opie shows that the protest tradition of Black-Puerto Rican/Latino coalitions gave voice to thousands of workers and students, reduced the power of entrenched elites, and transformed local Democratic Party politics in the city.

Opie’s book stands prominently within the recent wave of studies that lays to rest the unexamined assumption that Black and Puerto Rican activists in New York rarely united because they perceived disparate economic interests. Each story provides rich description of the conditions that gave rise to coalition making, the individuals and institutions involved, and the often-complex and varied outcomes. Moreover, Opie weaves a historical narrative with threads that bind the decades and reveal the continuity not only in the solidarity between African American and Puerto Rican communities, but also among many of the dedicated players themselves who appear and reappear in the struggles for racial and social justice.

The first of the sustained coalitions of Blacks and Puerto Rican discussed by Opie involves the successful campaign led by SEIU Local 1199 from 1959 to 1962 for union representation and collective bargaining rights in the city’s municipal and private hospitals. At the time, 80 percent of hospital service workers were Black and Puerto Rican/Latino. They worked in an environment of racial hierarchies, as janitors, nurses’ aides, orderlies, and some LPNs, whiles whites dominated supervisory and management positions. The 1935 Wagner Act did not cover hospital workers at the time, and workers were not easily persuaded to openly support unionization for fear of losing their jobs. Despite these obstacles, organizers in Local 1199 set their sights on uniting health and hospital care workers throughout the industry. Following a victory at Montefiore Hospital, which won union representation and resulted in immediate salary increases, Local 1199 moved on to organize all 35,000 employees in voluntary hospitals and nursing homes across the city. The prolonged effort involved determined workers who risked their jobs, rallies and strikes that defied court injunctions; and gradually the support of community residents, civil rights leaders, and Democratic Party political clubs. By the mid-1960s, New York State passed legislation that protected unionization for hospital workers and doubled the minimum wage in the state.

In moving from labor to student activism and solidarity, Opie recalls the central role that young people played in the 1960s in tearing down elitist walls, especially in higher education. Nationally and locally, Black and Latino (Chicano and Puerto Rican) youth were fed up with the institutional racism of universities whose Eurocentric curricula, costs, and selective admissions practices obstructed minority enrollments and discriminated against those in attendance. They were outraged, too, by the assassinations of civil rights leaders and no less by U.S. support for repressive regimes abroad. Some joined the Black and Brown power movements of the period, which were the inspiration for others. They supported liberation movements abroad and the anti-apartheid movement in South Africa. Puerto Rican activists in particular brought the case of U.S. colonial rule in Puerto Rico to the issues on the table. In New York, from 1965 to 1969, Black and Puerto Rican youth collaborated throughout the city to demand greater working class access to higher education, more Black and Puerto Rican faculty at all levels of education, and curricula that included Black and Puerto Rican studies. They joined other activists to oppose the Vietnam War and successfully thwarted Columbia University’s development initiatives that would have accelerated gentrification in Harlem. Under pressure from Black lawmakers, New York State established the SEEK program in 1967, which significantly increased Black and Puerto Rican college enrollments by 1969. In Opie’s words, they “worked collaboratively to hold these all-white institutions of higher learning to account and, by so doing, shift the racial consciousness of the entire nation” (p. 55).

As Opie thoroughly documents, some of the veterans of the student movements of the 1960s became members of the Latino—mainly Puerto Rican and Chicano—Left organizations of the 1970s. In New York, groups like El Comité-MINP, the Puerto Rican Socialist Party, and the Young Lords, along with organized labor, were places where future Puerto Rican “Progressives learned political strategy and how to run a grassroots campaign” (p. 87). Although the organizations on the Left tended to stay away from electoral politics, Black and Puerto Rican activists fought together for access to decent jobs and against union exclusion and, especially at the start of the Reagan-era neoliberal onslaught and rising militarism, opposed “supply side economics” and aggressive foreign policies. At the same time, in the mainstream political arenas, Black-Puerto Rican cooperation declined in the 1970s, especially among emerging local leaders who competed for limited leadership positions in antipoverty programs, jockeyed for political patronage in Albany, and differed on electoral strategies in Democratic Party primaries.

One of the most interesting and unique contributions of Opie’s book is his enlightening treatment of the progressive electoral coalitions that formed in the 1980s in the wake of the dissolution of the Black and Brown power movements and conservatives’ consolidation of power within the Republican Party. Many progressives embraced Jesse Jackson’s National Rainbow Coalition as an opportunity to create an insurgency within the Democratic Party and push a program of change for the working class. Although the effort had shortcomings at the national level, Opie notes that veteran activists at the local level learned two important lessons from Jackson’s presidential bids: minority candidates can do well at the polls with adequate support, and registering minority voters was vital to overcoming the Koch-controlled machine in New York (Ch. 6). Opie’s interviews with former members of the Puerto Rican Left reveal the extent to which they were involved in David Dinkins’ mayoral campaign. Utilizing their mobilization and networking skills, they formed Latinos for Dinkins and united with Black political leaders and communities to ensure Dinkins’ election as New York City’s first African American mayor. While Opie thoroughly explores the key roles played by highly regarded strategists like Bill Lynch, among others, he concludes that the Dinkins’ mayoral campaign “grew out of the rich protest tradition in New York City’s black, Latino, and labor communities” (p. 196).

For students, academics, and general readers alike, Frederick Opie’s book is widely accessible. An innovative surprise, especially for a book authored by a social scientist, is the inclusion of recipes of traditional foods of various Puerto Rican, Latino and African American cultures interspersed among the stories of activism. Opie argues that food is a central component of family and community and historically has been a routine ingredient in grassroots mobilization. Readers will surely appreciate, if not personally recall, the role of plentiful, delicious food-to-share in nurturing community and solidarity.

Upsetting the Apple Cart—a phrase Opie notes was once used by Malcolm X—is a major contribution to Puerto Rican, Latino and Black studies for the history it recovers and the analysis it offers of the structural and historical conditions that produced, and continue to produce, a shared identity and common political and economic interests among working-class people of color—against police violence, institutionalized racism, and racial and class inequality. Frederick Douglass Opie suggests that in the twenty-first century, with union membership at a historic low and City Hall still controlled by an abundance of unresponsive politicians, “developing strategies to mobilize black and Latino working-class voters seems the most cogent way of electing a candidate responsive to the Progressive coalition that put him or her in office” (p. 246). It is true, as Opie acknowledges, that the election of the first African American mayor in New York was a progressive step in itself. But the moderate agenda of the Dinkins’ administration was, in part, a reflection of the consequence when coalitions dissipate, as well as the handiwork of entrenched elites (including much of the popular media) that exacerbated racial hostilities and aimed to further divide-and-conquer. Even with the election of self-proclaimed progressives like Mayor Bill de Blasio, unless the financial and real estate sectors that grip New York are held accountable by sustained, mass mobilizations, it is unlikely that electoral strategies alone stand a chance at achieving deep, social transformations. This is all the more true when elected “progressives” aspire to higher office and must contend with a campaign finance system that dissuades them from taking principled stances. Frederick Douglass Opie’s Upsetting the Apple Cart is a powerful testament to what has been and has yet to be accomplished by alliances that seek democratization from below.

© Rose Muzio. Published by permission in Centro Voices on 5 February 2016.