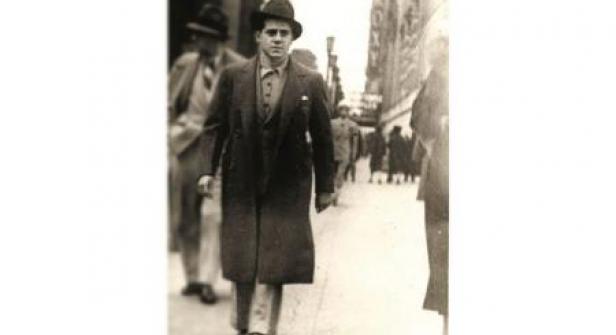 There’s something bigger than life about Larry Homar. At least that’s what I thought the first time I saw his portrait a few months ago, when I first learned about him. This man emanates the je ne sais quoi of the renaissance souls of yesteryears. I was not too far off. Larry Homar, or Lorenzo Homar as is his rightful name, was and remains in the hearts of those who knew him a Puerto Rican jack-of-all trades. He revolutionized visual arts in Puerto Rico, taking it to a whole new level of world recognition. Princeton University houses the Lorenzo Homar Collection and the Metropolitan Museum purchased a few of his pieces. The U.S. mainstream media has long recognized him as an iconic artist from Puerto Rico. Indeed, to speak of Puerto Rico’s visual arts history without speaking of Homar may be close to sacrilege. Yet, what may be an equal misstep would be to speak of Homar without speaking of New York City, and acknowledging how his experiences in the United States shaped him and his work.

Homar developed his social, political, and cultural sensibilities in the emerald city of the 20s, 30s and 40s. As Cristina Pérez Jiménez explained at the conference during the opening night of the exhibit Homar: Art Binding Ties from Puerto Rico to NYC, "The importance of the New York years in Lorenzo Homar’s oeuvre is not solely a matter of identifying specific stylistic influences or formal borrowings, but recognizing how he acquired there a fundamental understanding of the social purpose of art, which served as a lifelong compass for his illustrious artistic career. New York shaped the ideological contours of Homar’s artistic production."

Although born in Puerto Rico, in Puerta de Tierra to be precise, Lorenzo Homar moved to New York City at a young age. Necessity brought him to the city. In Puerto Rico, his father and uncle had been pioneers in Puerto Rico’s film industry. As agents for United Artists, Homar recalled in an interview given to Rina Benmayor for Centro’s Culture and Oral History Task Force in 1983, “they brought film to places where there were no theaters.” The family lived comfortably from this until the late 1920s, when the film industry established itself proper on the island. Unable to make ends meet in any new business on the island, Homar’s father decided to move his family to New York City.

In 1928, when Homar was 15, the family moved to El Barrio. He remembers, “[i]t was a working neighborhood, there were Italian-Americans, Jews, who were the ones who treated us best.”. At first, Homar spent his days fighting on the street because, “they would tell us that if we didn’t look Puerto Rican, why did we have to speak like Puerto Ricans. ‘We are Puerto Ricans.’ Then the things got worse. Around the Jewish neighborhood…there were no problems. With the Irish and the Italian-Americans there was a lot. But, eventually, we…you know…we established ourselves and became friends and everything.” One of the very first things he did when arriving to New York City was go to the Met with his father, an activity that became regular for the two. This was the first of many museums that Homar consumed with gusto through his time in the city. He became particularly inspired by the Cubism he saw at the Museum of Modern Art. 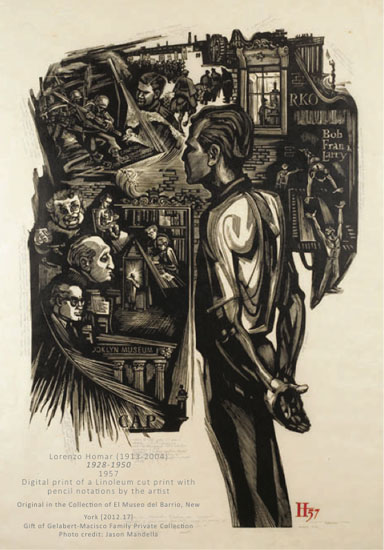 When speaking of the intersection of art and politics in Homar’s work, Antonio Martorell, his pupil and also a consummate visual artist in Puerto Rico, stated at the opening conference of the exhibit, “All these paths begin in New York City—the labor protests, the solidarity with the Republicans in the Spanish Civil War, the struggle for Puerto Rican independence, the humor as a weapon for denouncing political and social injustice, learning art at the Art Students League, the Pratt Institute, the Brooklyn Museum, and, above all, in the streets of the city. I remember listening to the maestro tell the story of how terrible it was to him to see his father in the soup line and his mother in the sweatshops, where she lost her eyesight, after the family had lived well in Puerto Rico, and how that terrible experience shaped him.”

Indeed, though rough around the edges, growing up in Depression Era New York City turned, whether by choice or need, Homar into a renaissance soul. He remembered that period quite fondly not necessarily because they were fun times but perhaps because they, as Martorell suggests, defined him. He went from taking classes at an arts school to becoming a messenger at a textile import company on Franklin and Canal and taking night classes after the market crashed. He eschewed trains, subways, and buses in favor of running around the city to save money. In the process, the city seeped into his psyche. As Benmayor summarized in a letter written to Centro for its recently opened exhibit on Homar, he became a “gymnast at the Y and a springboard diver at Coney Island,” he breathed the jazz era and encountered many of the greats in painting. At some point, he even performed vaudeville.

His artistry developed piecemeal through his New York years. An aspiring architect, during a time where architects had, according to Homar, to “be artists to be architects,” he began building his creative arsenal early on in his city life. He went from meeting Reginald Marsh, who Homar describes as “the painter of the Depression,” at the Customs House while working as a messenger to honing his craft in several well-known institutions, including the Art Students League, and the Pratt Institute, and the School of the Brooklyn Museum of Art, where he met and collaborated with some other visual brilliants such as Ben Shahn, Rufino Tamayo, and Gabor Peterdi. Well before the latter, he also worked as a jewelry designer at the House of Cartier. Think about that the next time you run across an exquisite Cartier piece.

Similarly to his aesthetic, Homar’s social consciousness took shape somewhere between the El Barrio and Coney Island. His time in New York City was rife with social and political activity. These were the years of the depression, of the WPA (for which Homar worked), of Jesús Colón and the socialist movement (who Homar interacted with), of Congessman Vito Marcoantonio, and of Oscar García Rivera (the first Puerto Rican elected to office in the United States). According to Lena Burgos-Lafuente at the recent opening for Homar’s exhibit at Centro, “Coney Island, which he visited with his fellow acrobats of many stripes” was central to Homar’s political education. As were his encounters with the militants of the Spanish Republican cause, a growing Puerto Rican community, and a good number of “publications that defended both—La República Española and Puerto Rico’s independence causes.”  Homar himself summed it up nicely, “Coney Island was also a political platform, where one could hear all kinds of political commentary…generally left leaning. The street, Coney Island, and the people I met were my university.” Regardless of what he heard or who he spoke to, be it his father speaking about the Republic or Jesús Colón about socialism, Homar listened and developed a keen political consciousness that informed his art both in New York and in Puerto Rico.

Homar returned to Puerto Rico in 1950, a few years after he served in the U.S. Army, where he received both the name Larry Homar (that stuck through the years) and a Purple Heart, and after his studies at the School of the Brooklyn Museum of War. In speaking of his return to Puerto Rico, according to Arcadio Díaz Quiñones, Homar said, “I wanted to return. Maybe it was the tropical landscape of New Guinea and the Philippine islands that moved me to do so, or my brother, Roberto who had returned in 1949 to manage the dry cleaning business that belonged to an uncle…I came back because as a Puerto Rican after so many years away, I believed hearing and reading about Puerto Rico, its struggle for independence, and the longing to see my own country, that I could help with its development with the experience I had acquired in the United States. Nature and the human touch of my own country helped me to find myself.” That’s precisely what he did in Puerto Rico, co-founding the Centro de Arte Puertorriqueño, working with the Instituto de Cultura Puertorriqueña, designing the posters for the VIII Pan American Games, amongst many other things and pieces. Homar passed away in Puerta de Tierra, his birthplace, on February of 2004.

Homar’s legacy transcends borders. It bridges the US Puerto Rican and the island experience. It’s incredibly difficult to compress Lorenzo Homar’s life and accomplishments into a single few strokes of the keyboard. He simply did too much, achieved too much, moved too many to cram in the blogosphere. Yet, he did so not only with passion but with wit and humbleness. Those who remember Lorenzo, like Rina Benmayor, remember him as “a small, very elegant man…warm and inviting, and happy to share his life stories.”  His work spoke and still speaks boldly, thoughtfully. It is political, creative and moving at once, and it deserves (or rather it commands) our attention.