My discovery of the Young Lords through three NYC exhibitions 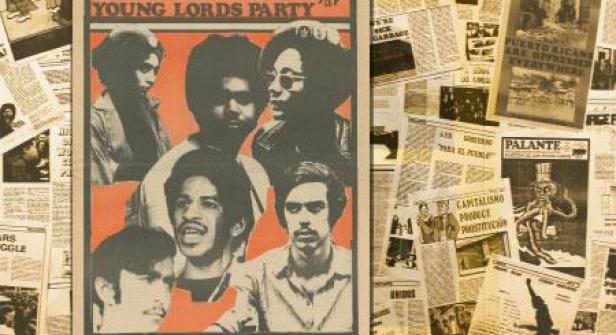 P’alante—words that ironically throw us immediately back in time to the organization that embodied the phrase during the late 60s early 70s-—The Young Lords Party, one of the best known Puerto Rican led political organizations of its era. In the past few months, the phrase has taken on new meaning as three institutions pay tribute to the Young Lord’s impact in New York City with a multi-site exhibition. Indeed, the Young Lords are back in New York City through ¡Presente! The Young Lords in New York. The Bronx Museum of the Arts (July 2 – October 18, 2015), El Museo del Barrio (July 22 – October 17, 2015), and Loisaida Inc. (July 30 – October 10, 2015) came together to highlight the history of accomplishments of the Young Lords through recordings, writing, paintings and more. If you haven’t gotten to check the exhibits out, you still have time. We recommend you do and steep yourself in the history of a movement that deeply touched our communities.

Attending an exhibition located at three separate institutions and locations was an adventure for me. The feat underscored the breadth and reach of the organization during its most intense years and even today. My first stop on my journey was El Museo del Barrio. Upon arrival, I immediately noticed a map in the exhibit’s entrance that laid out the Young Lords activity in Spanish Harlem, and I found myself easily transported to the places they inhabited, places that are not too far off from the museum itself. The exhibit, according to its curator Rocio Aranda Alvarado, “explores some of the major social and political actions undertaken by the Young Lords in East Harlem during the peak of their activity.” The welcome map prepared me for just that. 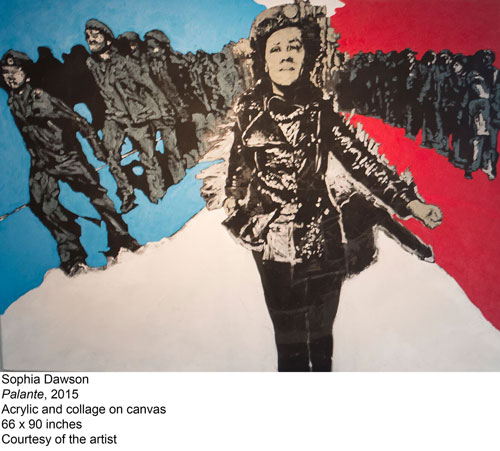 Image courtesy of The Bronx Museum of the Arts. Published by permission.

It, however, did not prepare me for the depth and rich exploration that followed in the gallery holding the main exhibit. As I entered, I noticed a recording and video installation of Young Lord members. Amongst these were videos of the Young Lords speaking about themselves about their commitment to equality, social justice, to their community, and to Puerto Rico; of Young Lords feeding children and the elderly through their free meals program. Seeing photographs of El Barrio during the time of the Young Lords really helped me visualize the struggles many New York City residents faced, the struggles the Young Lords waged in support of these residents. Posters that outlined the Young Lord’s history and evolution, such as the 13 Point Program, the poem “Puerto Rican Obituary” by Pedro Pietri, and editions of their newspaper P’alante covered the gallery walls. The exhibit also included sections dedicated to the women and children in the group. In the women’s section, I got to see beautiful photographs of Denise Oliver, the Young Lord’s Minister of Economic Development, and hear her voice in a recording expressing to her sister members that “We want equality for women…” By giving voice to these groups, the exhibit effectively delivered on Oliver’s request. Beyond the pieces of an era, the exhibit also showcased contemporary artists, such as Miguel Luciano, who created a beautiful arrangement of 4 guns painted in purple with the words “Health, Food, Housing, and Education,” one of the group’s most famous slogans. The entire exhibit brought me closer to this world I have known mainly through books and heresay. I felt like I was being handed a torch to continue fighting for equality and a better world. 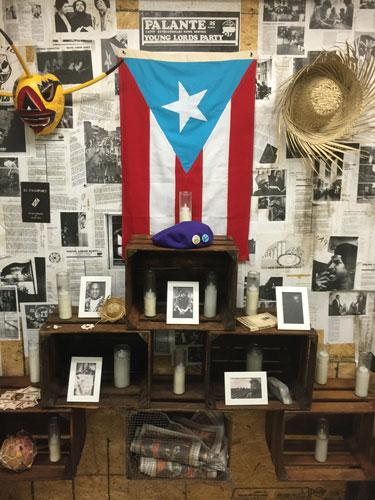 If the exhibit at El Museo del Barrio brought to life a history I knew only in the abstract, Loisaida Inc.’s exhibit, created with the support from Centro, amplified moments and voices of the organization that are generally a whisper in the collective knowledge about the group. Not a traditional museum, the inclusion in the exhibit of Loisaida, Inc., a Latino-based non-profit community development organization affiliated to Acacia Network, echoes the inclusive and socially conscious spirit of the Young Lords. The entrance corridor met me with a piece by contemporary artist Adrián Viajero Roman, signaling what the exhibit accomplishes so well. Overall, it navigates the history of the organization with a keen eye to its long-lasting contributions. Besides including the powerful Presente slogan, the piece evokes Puerto Rican culture with images of Puerto Rican icons. A blown up New York Timesarticle, “30 Young Lords Members taking over the Statue of Liberty,” describes the Young Lord’s protest at the Statue of Liberty to advocate for better social services for the Puerto Rican community. As I continued through the center, I took in the photographs and recordings of famous Nuyoricans. One, in particular, caught my attention: Sylvia Rivera’s. That’s right, one of the main actors of the Stonewall riots and a powerful transgender activist, was a member of the Young Lords. After watching several recordings about her, I knew Sylvia as a respected icon in the Young Lords Party and in Puerto Rican history. Knowing the Young Lord’s inclusiveness yesterday is bound to inspire our community today. 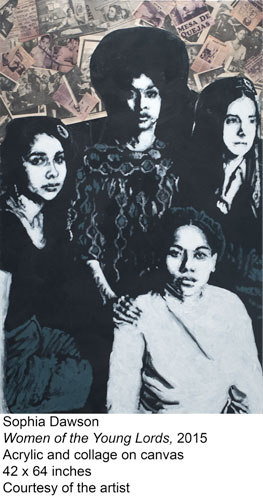 Image courtesy of The Bronx Museum of the Arts.
Published by permission.

My last stop on my journey was at The Bronx Museum of Art. The exhibit was organized by guest curator, scholar and professor Johanna Fernández, and by adjunct curator Yasmin Ramírez. According to the curators, the exhibition features “more than 50 works, including paintings, installations, photographs, films, and rare archival materials that highlight the presence of women in the Young Lords, the struggle for equal representation of Latinos in the media, and community actions in the South Bronx.” Indeed, Acknowledging the Party’s inclusiveness, the Bronx Museum of Art focused mainly on the women of the Party. One can find many quotes and images of Iris Morales, Denise Oliver, and other Young Lords female icons. In many paintings of the exhibit, the women were always the focus. There’s several photos of troops of men where the central figure is one of the female members of the group; there’s the beautiful realistic portraits of Iris Morales and Denise Oliver with abstract backgrounds that captivate the powerful role the women played in the Party. Seeing these women it became clear that the movement was at once diverse, complex, and unifying. Any young woman coming into the exhibit can find solidarity with the Young Lords Party, see themselves in their rich history. Be surprised by what they see. This is, perhaps, the strength of the three exhibits combined: present a story we all suspect we know in such a way that we actually leave knowing.