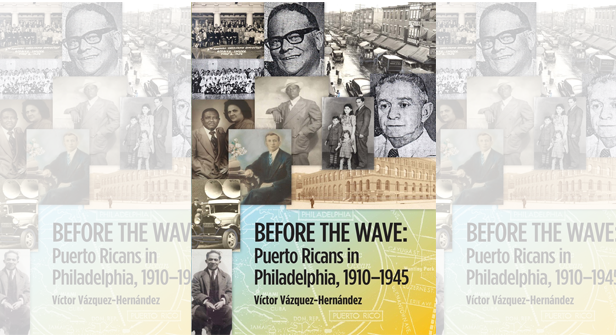 Before what some scholars refer to as the second wave of Puerto Rican migration; i.e. the so-called Great Migration that began after World War II; there was the first wave of the pioneering migrants who first settled in the United States. The early diaspora would later be joined by thousands of Puerto Ricans. The influx of migrants would then be converted into sizable diasporic communities in cities like New York, Chicago, and Philadelphia. It’s a historical period that has received some though not nearly enough attention, according to Dr. Víctor Vázquez-Hernández; especially, he continues, when you venture beyond the early Puerto Rican community that began to form in New York City during the interwar years. Yet as the title would suggest, his new book, Before the Wave: Puerto Ricans in Philadelphia, 1910-1945, attempts to redress the dearth of research available and explore the early history of Puerto Ricans in the city of brotherly love.

Dr. Vázquez-Hernández first arrived in Philadelphia in 1988, when he began to work at Temple University. Upon his arrival, he developed an interest in the history of the city’s Puerto Rican community. However, he quickly discovered that very little attention had been paid to the history of the aforementioned first wave. He cites the work of Dr. Carmen Whalen as one of the few examples of research into the origins of the Puerto Rican community in Philadelphia. Unfortunately, her area of interest, like many scholars, has focused on the post-World War II period.

For Dr. Vázquez-Hernández, the story begins much earlier, around the late 18th century. During this time, he explains, ships from the island would arrive in Philadelphia carrying sugar and molasses. And by 1807, ships from Philadelphia were making regular stops in Puerto Rico. Philadelphia was, after all, still an important port city. Later, in 1822, there is an anecdote about a ship loaded with arms that leaves the Port of Philadelphia bound for Puerto Rico. Unfortunately, due to bad weather, the ship is forced to dock in Curaçao, thwarting an attempt to overthrow the Spanish crown. In short, the connection between Puerto Rico and Philadelphia, while mostly related to commerce and the revolutionary plots of anti-colonialist ex-pats, goes back much further than expected.

It is precisely the commercial ties between the two cities which brings the first Puerto Ricans to settle in Philadelphia at the turn of the 20th century: merchants, cigar makers, and laborers, for example; as well as a modest professional class. The book also highlights the network of Hispanic enclaves that existed in the city when these Puerto Ricans arrived—it was not only Puerto Ricans, Dr. Vázquez-Hernández notes, but Latinos in general that had been neglected by scholars. Moreover, these Hispanic enclaves are indicative of an important trend of social capital created by earlier Spanish-speaking migrants living in the city. By the end of World War II, this social capital, argues Dr. Vázquez-Hernández, will be extended to the new generation of Puerto Ricans arriving to the city. For example, a Puerto Rican boarding house that caters to new arrivals or a job opportunity from a friend. Members of the older generation also assumed leadership roles as the Puerto Rican community developed and the ensuing citywide issues that came with this growth, i.e. the question of “Puerto Rican problem” after a week of fighting in the streets as racial tensions piqued.

This social capital among Puerto Ricans and the larger Pan-Latino community was also complimented by the work of four organizations active in Philadelphia: La Milagrosa Church; the Hispanic American Fraternal Association; the First Spanish Evangelical Mission; and the International Institute. Dr. Vázquez-Hernández credits these groups with not only welcoming immigrants, but also with helping them to integrate into the city and maintain their culture without the added pressure to assimilate. More simply put:

“The network of religious, social, and cultural groups that evolved between 1910 and 1945 formed the backbone of the Puerto Rican community that emerged in the 1950s and 1960s”.

Similarly, Before the Wave: Puerto Ricans in Philadelphia, 1910-1945 is a bridge between these two overlapping waves of migration. In exploring the origins of the Puerto Rican community, we can begin to understand why Puerto Ricans in Philadelphia ended up living in neighborhoods like Southwark, Spring Garden, and Northern Liberties, versus others (spoiler: Dr. Vázquez-Hernández hints at housing policies enacted to segregate the city and ensure African Americans and ethnic minorities live in poor housing conditions). These are practical questions in understanding the origins of our community, always with the possibility of more research being done. It’s also a reminder that there are no accidents—at least from a historical perspective—when it comes to the who, what, why, and where of the Puerto Rican diaspora.

To order the book via the Centro store, click here.