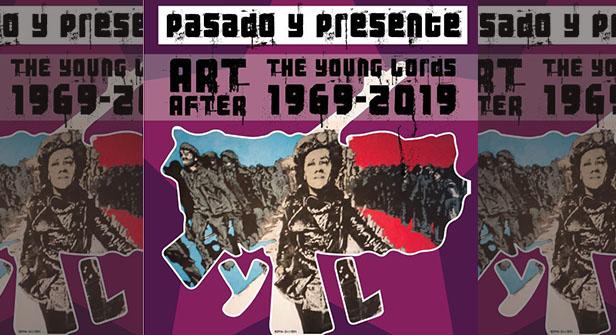 With Pasado y Presente: Art After The Young Lords, a new exhibition now on display at  the Nathan Cummings Foundation, the once obscured and misunderstood legacy of the Young Lords takes another step forward—50 years after the New York City chapter of the legendary activist group was formed. This is not, however, a mere victory lap, though curator Yasmín Ramírez does incorporate materials from past Young Lords exhibitions. Instead, Pasado y Presente is an opportunity for audiences to broaden their understanding of the impact the legacy of the Young Lords has had, especially amid the recent resurgence of interest in the group’s history that has taken place in the past decade or so.

Books, films, music, and museum exhibits have all contributed to this revival. Pasado y Presente is yet another example of this ongoing excavation process, one that purposefully combines archival materials with newer works, such as Valor y Cambio by artists Frances Negron-Muntaner and Sarabel Santos Negrón, which evokes the call for Puerto Rican independence advocated by the Young Lords decades earlier through prototypes of Puerto Rican community-based currency.

Fittingly, on the same wall hang vintage posters created by the artists of Taller Boricua, many with themes of revolution and equality that echo into the present day. The exhibit also serves as an introduction for those unfamiliar with the radical politics of the Young Lords and the Puerto Rican Left of the 1970s. Archival documents like the 13-point revolutionary platform adopted by the group as well as FBI surveillance files speak to the Young Lord’s uncompromising socialist ideals which have been repurposed in recent years to once again challenge the existing political establishment. The militancy of the Young Lords, another enduring feature of their legacy, can be seen throughout the exhibit.

The photographs of Maximo Colon, in contrast, showcase the intimate side of what was once a thriving social movement in New York City. Perhaps the centerpiece of Pasado y Presente is an installation by Adrian Viajero Roman, an altar dedicated to Young Lords members who have since passed, including Luis Garden Acosta, founder of El Puente Academy, who died earlier this year. The installation provides a necessary spiritual element to the exhibit, elevating Acosta and his fallen comrades to the level of ancestor.

It is interesting to note that the political climate has changed dramatically since the Young Lords began to receive their due. The sense of injustice and mass mobilization of the citizenry are often compared to the era that birthed the Young Lords, which has made their legacy more urgent.

Yet with this latest exploration of the group’s history, symbolism gives way to a call to action as one navigates the maze-like hallways of the office of the Nathan Cummings Foundation. This will be reflected in a series of public programs related to Pasado y Presente, including several urban art interventions taking place at the 2019 Loisaida Festival, which in turn will also serve as a prelude to a satellite exhibition opening at the Loisaida Inc. Center in June.

Above all, the exhibition is a timely reminder of the impact that one vision of the world can have as seen through a myriad of artistic renderings. Fifty years later, the Young Lords are indeed here to stay.

Pasado y Presente will be on display at the Nathan Cummings Foundation through October, by appointment. For more information, visit loisaida.org.

About a week ago, Netflix added the 37-minute documentary After Maria by Hunter College...
Review of “The Piano: From Florencia to Puerto Rico”

Just as the title suggests, Ramón Figueroa Torres’ book attempts to narrate the history...
Documenting the History of Puppetry in Puerto Rico Through Film