A New Look at the Puerto Rican Civil Rights Movement 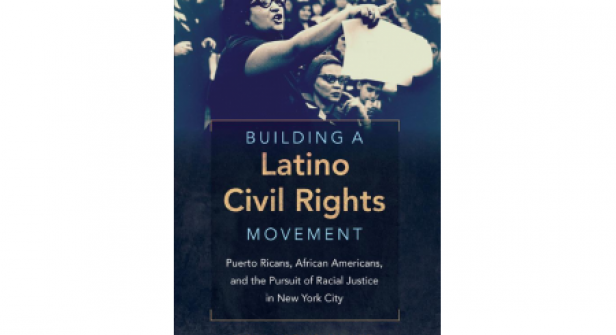 Scholarly books about “identity” present a number of risks. How does one measure identity when individual identity, let alone group identity, is in a constant state of transformation? Do we privilege one “identity” over another? Is identity the catalyst for a host of social, political, and economic developments in American history or is identity the result of these structural changes? Sonia Song-Ha Lee examines in Building a Latino Civil Rights Movement: Puerto Ricans, African-Americans, and the Pursuit of Racial Justice in New York City the overlapping construction of identity by Puerto Ricans and African-Americans in post-WWII New York City and how this construction was used to create a common civil rights agenda. Moving away from previous literature that overemphasizes the African-American influence on Latino activism and the literature that highlights the separation between these two communities, Lee reminds us that both “culture” and “identity” are political tools to be deployed in different ways at different times to achieve a variety of objectives.

Lee begins her book by examining the relations between African Americans and Puerto Ricans in the labor movement in New York via a discussion of the International Ladies Garment Workers Union (ILGWU). Despite the participation of both groups in this union, cross-racial civil rights collaboration was stymied by the leadership of the union as well as by misperceptions of one another. She also examines, through participation in settlement houses, how Puerto Rican and African-American clients and social workers were able to carve out a shared space to develop platforms for community development and social protest. The relationships forged by young Puerto Rican professionals and activists like Antonia Pantojas and Manny Diaz with prominent African-Americans such as Frank Horne, Bayard Rustin, and Kenneth Clark was emblematic of how some Puerto Rican leaders consciously reexamined their own racial identity and chose to align themselves politically with African-Americans in New York during the early 1960s.

While the forging of stronger of ties with the African-American civil rights struggle was viewed a sound tactical decision, others members of the Puerto Rican leadership like Joseph Monserrat and Gilberto Gerena Valentín cautioned against being too closely identified with Blacks reminding us that “race” is not a primordial condition but a continuously contested process. The War on Poverty opened up new avenues by which both Puerto Ricans and African-Americans could mobilize politically. Groups like MEND and the United Bronx Parents were able to secure funds to support their work but fissures within the Black-Puerto Rican alliance began to appear as elements within the Black Freedom struggle made the turn towards Black Power. In addition, as Puerto Rican and African-American activists and organizations competed for the same antipoverty funding, they often were forced to confront stark class differences within their own communities as well as negotiate the racial terrain of politics within the fragile Black-Puerto Rican alliance.

Perhaps the most important civil rights collaboration between African-Americans and Puerto Ricans in New York City was around the issue of community control of public schools. While the experiment only lasted a few short years, with the conflicts over who would control I.S. 201 and bilingual education in P.S. 155 being the most prominent examples, community control of schools served as a vehicle to infuse, “… a new reformist impulse within the schools by proving that cultural nationalism did not alienate students from the larger society but instead bolstered their civic engagement as American citizens” (209). Lee does not ignore the fact that that a critical component for the short-term success of this endeavor was support from key actors within the State who found it politically expedient to aid the cause of community control.

Although Lee does not discount the influence of external factors that contributed to the demise of the Black-Puerto Rican alliance, she chooses instead to focus on the internal cleavages that centered on class as the primary factor for this demise of this coalition. Black and Puerto Rican parents were often frustrated by how Black and Puerto Rican teachers seemingly reproduced the same attitudes towards their children as white teachers had in the past. The forging of a separate movement around the issue of bilingual education and the rise of political figures like Herman Badillo who eschewed association with grassroots organizers signaled a conscious shift away from cross-class and cross-racial solidarity in the 1970s.

Lee employs an impressive array of sources to assemble her thankfully jargon-free narrative. She draws upon a wealth of existing oral history collections as well her own set of interviews. While the many stories included in each chapter might require some context, Lee’s writing is sufficiently clear to utilize in an undergraduate setting.

One of the strengths of Lee’s narrative is the different ways that cultural nationalism during the 1970s influenced civil rights struggles beyond the more visible militant groups like the Black Panthers and the Young Lords. While these two groups undoubtedly make for interesting subjects of study, we know that the Black Freedom movement engaged a multiplicity of fronts during the post-war period. This was equally true for Puerto Ricans. Lee tackles a wide range of civil rights initiatives and organizations such as the Hispanic Association for Higher Education in 1956, the National Association for Puerto Rican Civil Rights in the 1960s, and PRISA. Lee not only adds to the scholarly literature that highlights how dynamic and varied the civil rights struggles were within the growing Puerto Rican community such as the 1998 publication of the edited collection by Andrés Torres and José E. Velázquez’s, The Puerto Rican Movement: Voices from the Diaspora, and the more recent Puerto Rican Citizen: History and Political Identity in Twentieth-Century New York City by Lorrin Thomas (2010), but also to the growing literature on African-American and Latino relations like Black and Brown in Los Angeles: Beyond Conflict and Coalition, edited by Josk Kun and Laura Pulido (2013), and Fighting Their own Battles: Mexican Americans, African Americans, and the Struggle for Civil Rights in Texas by Brian Behnken (2014).

Lee forces us to question whether or not Puerto Ricans’ refusal to assume a wholly “Black” identity (as she describes on page 220) was the cause of the fallout between African-Americans and Puerto Ricans in a place like the South Bronx in the 1969 and confront the possibility that the conflict was really about level of influence and access to HUD dollars that leaders like Ramón Vélez and Angelo Del Toro had access to. In addition, she demonstrates how the battle over bilingual education was less about ideology and identity and more about securing employment (230).

What is unclear is how Lee actually defines the Civil Rights Movement. A large part of this book’s chronology takes place within the “classic” phase of the Civil Rights Movement (the mid-1950s through the 1960s) but her final chapter on the breaking of the Black-Puerto Rican coalition goes well beyond 1968. By constructing a narrative that emphasizes the post-1968 fracturing of these two communities, Lee is reinforcing the “classic” interpretation of the Civil Rights Movement (which argues that Black Power was the death knell of the movement) as opposed to the “long” interpretation. The problem with the “classic” construction is that it often adheres to what Clarence Taylor calls the “Southern Paradigm” and privileges the activities of groups like SLCC rather than what transpired in northern and western cities. In her own way, Lee argues on behalf of a “broad” Civil Rights Movement (a conception of the movement which argues that Latinos, Asians, and other marginalized groups were just as important to the construction of the struggle for equality as African-Americans were) within the “classic” chronological framework.

Lee’s book is a welcome and timely edition to civil rights historiography and the growing literature on Black/Latino relations. Considering the recent weakening of the Voting Rights Act and the tentative push towards comprehensive immigration reform, Building a Latino Civil Rights Movement forces us to consider how much the Civil Rights Movement has evolved. Lee, through this book, reminds us that while identity can be divisive, “Blackness” and “Puerto Rican-ness” (and one could add “Latinidad”), it doesn’t have to be since it carries with it the potential to reinvigorate the struggle for social and political equality.

© Ariel Arnau. Published by permission in Centro Voices on 3 December 2014.