Home » Centrovoices » Reviews » A Promise Fulfilled: A Conversation with Virginia Sanchez-Korrol, Historian and Author of "A Surprise for Teresita / Una Sorpresa Para Teresita"

A Promise Fulfilled: A Conversation with Virginia Sanchez-Korrol, Historian and Author of "A Surprise for Teresita / Una Sorpresa Para Teresita" 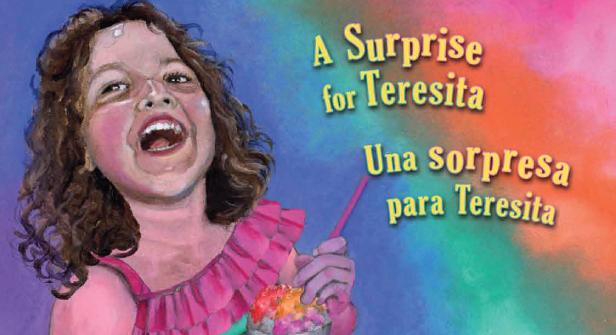 I recently had the privilege of interviewing Virginia Sanchez-Korrol about her new picture book published by Arte Público Press, A Surprise for Teresita / Una sorpresa para Teresita (2016). The book centers on the story of a little girl and her family, experiencing the everyday joys of life in a Puerto Rican diaspora neighborhood. Sanchez Korrol, a renowned historian, told me why she wrote the book and reflected on the power of children’s books for providing young audiences with an important sense of history.

MJ: I always like to ask writers and scholars what they read growing up because I think those early experiences with reading have such an important impact on our understanding and growth. What were your favorite stories growing up?

VSK: I loved the “Dick and Jane” readers we had in school. I still remember them, and all the adventures those children would go on. They opened the world to us coming up in school. I always saw them as a magical world. But, we [Puerto Ricans] weren’t there. We were not in stories. You could imagine yourself in the story, but you were not part of the story. In writing Teresita, I really think I am showing that Puerto Rican kids and Latinxs kids are not outsiders or the other, they are the one.

MJ: When did you write Teresita? What were the origins of the story?

VSK: I wrote the story 45 years ago. All of my experiences growing up were in an urban area. It was an age of innocence-but that didn’t mean we were poor or that there weren’t drugs and other problems in our neighborhood. When I moved to Long Island with my family and my daughters, I realized that growing up in this new neighborhood would mean that they would know absolutely nothing about their heritage. Their neighborhood was very “Dick and Jane.” I wanted them to have a sense of how I grew up and who our Puerto Rican community was. Of course we would always read books to them. But, none of the books showed us. I wanted to write a story that showed us Nuyoricans. At that point, when my daughters were younger, I had been a high school teacher, and an English major, so I had a sense of how stories work for young children. And I sent the draft of Teresita to Golden Books publishers. They rejected the story. When I got the rejection of the story, I was so embarrassed. I kept asking, “How is it that I don’t know how to write a children’s book?” It is interesting because in many ways this caused me to think I need more education and more preparation before I could try again with the book. This led to my decision to go to grad school and become a historian, something I hadn’t thought about until now. I put the manuscript in an envelope and addressed it to myself. So, this little book rested in my desk drawer.  Until three years ago, when I moved again and had to dismantle my office. At this point, I had been a full professor at Brooklyn. And I found the envelope. I said, “This is a damn good story.” Now, thinking about all that is going on with these conversations about diversity in children’s literature, I realize Teresita was ahead of it’s time.

MJ: You have written historical novels before for example, Feminist and Abolitionist: The Story of Emilia Casanova (2013). This book is more specifically for younger readers. Why did you write a children’s book? In particular, as a historian, what relationship do you see between history and children’s literature?

VSK: Going back to the “Dick and Jane” basal readers, I loved literature. I loved stories. I learned history through stories. But, I have always wondered, “Can that be my story?” I even asked a colleague about this once about the history of the founding fathers. I said, “That story about the founders, can it be my [as a Puerto Rican woman] story?” He just looked at me a bit confounded. My focus in my research in U.S. history had always been on inclusion, on bringing our experience into the textbooks into history. From Colonia to Community (1994) does that in the same way. I emphasize the positivity and complexity of our community. I had done all this work, and I find this little story of Teresita and it was almost as if it was symbolic. The time is now. I believe that what we, as a Puerto Rican community and also in scholarship, have accomplished in the last 30 years is evident in the story of Teresita.

There is a clear connection in my mind between writing the history I wrote and children’s books. The history that most interested in me has been our experience in the United States. It is to me a lost subject. Everything I have done has been to restore a sense of history to our communities and to a broader audience. Clearly, the hardest thing for me has been to go from being a historian to being a storyteller. With some of the historical novels I have written, it has been challenging to go from being overly historical to suddenly writing a story where the history is subordinate. Yet, anything I have ever done as a historian can be told in other mediums. Children’s books give our young people an opportunity to see themselves in stories sooner. We don’t reach our young people early enough that they can begin forming an image of themselves as people with a past in this country.

MJ: The story of Teresita is really one of a child finding hidden treasures in the lives of the people she knows the most. I was struck by the simplicity of the story and also the day to day joys of being a Latinx child in your neighborhood with your family. How is the story distinctive as story of Puerto Rican children growing up in New York? Also, how did you collaborate with Gabi Baeza, the Spanish translator and Carolyn Dee Flores, the book’s illustrator?

VSK: It takes a village to produce a child’s book. Carolyn Dee Flores is my favorite illustrator and when I saw the first prints I was just overjoyed. Teresita looks so much like kids I knew at that age, and so much like my grandniece does today. I wrote Carolyn a fan letter telling her how much I love her work.

The next hurdle was the translation. When I initially received the Spanish translation, I found it was too perfect. I gave it to my sister. She said, “There is nothing wrong with it. It just is not Puerto Rican Spanish.” I wrote to the translator and expressed my concerns and ideas for how the book could reflect, in the small details, Nuyorican Spanish. For example, instead of “cuadra,” “bloque.” Phrases like “brincando soga/jumping rope” were important or “jugo de china/orange juice.” When Teresita goes on the fire escape, I did all kinds of research to find the best word for “fire escape” in Nuyorican Spanish. I asked my family, I went over Ana Celia Zentella’s work. And lo and behold, there was no better phrase than “el fire escape.” So, that is how it read in Teresita.

Finally, I gave the book to my daughters. I dedicated it to them after all, saying “A promise fulfilled.” In my family, we are all writers. Everybody added a little something. I look at it as a story I wrote for two little girls, and it is now going to be for so many children.