Puerto Rican Soldiers: A Review of "Ethnic and Racial Minorities in the U.S. Military" 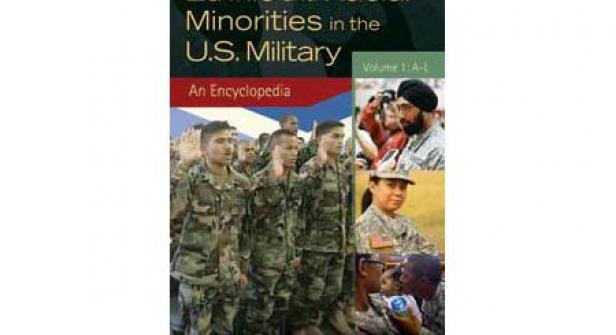 Since President Harry S. Truman signed Executive Order 9981 on July 26, 1948, ordering the armed forces to provide equal treatment and opportunity for servicemen without regard to color, race, national origin or religion (in essence calling for desegregation), the roles of minorities in the military have steadily increased. The history of minorities in the military, however, does not begin or end in the 1940s, neither is restricted to African Americans and Latinos. In that regard, Alexander M. Bielakoswky’s Ethnic and Racial Minorities in the U.S. Military is a timely and essential piece.

The breadth and scope of this work is vast and inclusive. These volumes introduce the reader to Dutch and Germans in the colonial militia ante-independence, Irish in the Union armies, North American first nations and the many roles they played in both U.S. military history and in its armed forces, and Aleut and Eskimos of the Alaska Scouts to mention a few. Attesting to the diversity these volumes seek to show, the first volume’s initial entry is that of John P. Abizaid, a four-star Lebanese-American general who commanded the U.S. Central Command—CENTCOM—(2003-2007); and ends with Ben Kuroki, the only Japanaese-American airman to serve in combat in the Pacific during WWII. The second volume begins with David D. Marcus, an American U.S. Army officer who in 1948 became the first Israeli general officer.

The introduction addresses the issue of who can be considered a minority. Bielakoswky argues that anyone not belonging to the dominant Anglo-Saxon protestant establishment qualifies as a minority. I agree with him, to a certain point. There is no doubt that many Euro-Americans groups have been minorities in the U.S. However, Italians, Dutch, and Germans for example, have had an easier path into mainstream and getting rid of the “minority” stigma than non-European minorities. For that matter, it is somehow odd to include German or Italian-Americans during WWII as minorities. Must certainly, these Euro-Americans did not face the discrimination that Japanese-Americans and African-Americans faced in both the civilian world and in the military during this war as they had been welcomed into whiteness.

However, by including groups that used to be minorities, Bielakoswky highlights processes of assimilation, integration, and enfranchisement in which the military plays a vital role, as I have argued elsewhere (Franqui-Rivera 2010). The entries in these volumes show a plethora of ethnic, racial and religious minorities and their passing into the mainstream aided by military service. For example, see the case of the Indian Sikh Bhagat S. Thind, who appealed to both his military service during WWI and the “Caucasian” origin of Indians to gain U.S. citizenship (pp. 677–8).

Exactly because the evidence is so compelling I’m struck by the omission of entries on assimilation, citizenship and military service. For example, as the U.S. entered WWI the Wilson administration feared that the more than 15 million immigrants who had reached the United States between 1900 and 1915 posed a threat to the country and hence it launched a 100 percent Americanism campaign designed to assimilate ethnic minorities. Military service and the creation of the National Army were important tools in this assimilation campaign. The volume also neglects to include entries on the mass naturalization ceremonies for service members conducted in the theaters of war of Iraq and Afghanistan. Also missing is the other face of the coin, the deportation of foreign U.S. veterans honorably discharged from the military.

In the particular case of Puerto Rican service during WWI, we find a repetition of the myth linking the extension of U.S. citizenship to Puerto Ricans with the metropolis’ desire to draft Puerto Ricans (p. 544). However, only aliens who had not declared their intention to become citizens and who had entered the country after the passing of the selective service draft law were exempted from registering. Puerto Ricans were not categorized as aliens and they had been “American Nationals” since 1900. Regardless of citizenship, Puerto Ricans were required to register for the draft (Franqui-Rivera 2013).

Those interested in Puerto Rican military history will be pleased to find entries on important Puerto Rican military figures such as U.S. Navy Rear Admiral Rafael C. Benítez (pp. 84–6) who had a long and distinguished naval career after graduating from the U.S. Naval Academy in 1939. Also included is Juan C. Cordero Dávila, who as a colonel led the 65th Infantry during its debacle at Outpost Kelly in the fall of 1952 (pp. 140–2) and later became adjutant general of the Puerto Rico National Guard.

Five articles tell a cursory story of Puerto Ricans in the U.S. Military since 1898 to the Vietnam War (p. 541­-62). The 65th Infantry is included separately in a rather short entry (pp. 655–6). The entry on WWII is perhaps the richest of them all. It mentions military units and where they served; military installations built on the island; distinguished Puerto Rican soldiers, and pilots who volunteered to the Flying Tigers, and the Royal Canadian and British air forces before the U.S. entered the conflict. It mentions distinguished naval officers such as Horacio Rivera (the first Puerto Rican to become a four star admiral) and Marion Frederic Ramírez de Arellano (the first Hispanic submarine commander) among many others. This entry also notes the contribution of roughly 200 Puerto Rican women who served in the Women’s Army Corps (WAC) and the Army Nurse Corps. Among them we find Sylvia Rexach, and Carmen García Rosado who later became an author and leading activist in securing female veterans’ rights (pp. 548–9).

A short entry regarding the 295th and 296th Puerto Rican infantry regiments is marred with factual errors (pp. 696–7). The essay claims that these two regiments became the nucleus of the Puerto Rico National guard six days after the U.S. entered the conflict in 1917. In fact, military authorities opposed the creation of the PRNG throughout the conflict arguing that it would undermine the mobilization of the 94 Division (the Porto Rican Division) which were to consist of four regiments 373, 374, and  375, 376. The 375 and 376 were to be manned by “Colored” Puerto Ricans as the Porto Rican Division followed the segregation policies of the U.S. military. The PRNG would not be created until 1919 (Franqui-Rivera 2010).

Despite the above mentioned omissions, I highly recommend this encyclopaedia. These volumes go beyond the well-known Buffalo Soldiers, Tuskegee Airmen, the Nisei Regiment, or the 65th Infantry for example, and provide rich, detailed entries on obscure subjects. This work ends with a useful twenty-seven page chronology (pp. 743–70) highlighting minorities’ role in U.S. military history. A categorical index, supplementing the onomastic one, is divided by Individuals, Events, Places, Groups and Organizations, and Acts and Documents among others which facilitates searching through these massive volumes. In summation, this encyclopaedia should prove helpful to professional scholars while remaining very accessible to students and the general public.