Home » Centrovoices » Reviews » A Review of Brooklyn Dreams: My Life in Public Education

A Review of Brooklyn Dreams: My Life in Public Education 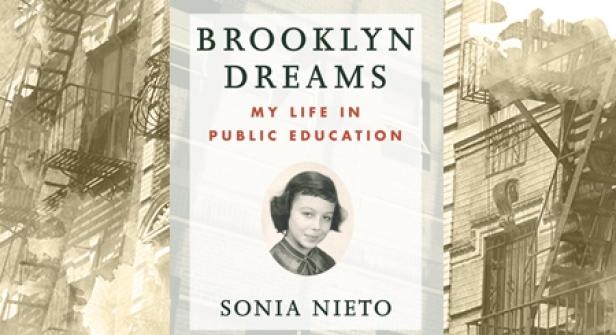 Brooklyn Dreams: My Life in Public Education is the memoir of a diasporican scholar who is one of our most respected and beloved teacher/educators in public education. Sonia Nieto’s memoir is also unusual because much of it draws on a personal diary she kept over the course of her life. Thus, the memoir is remarkably detailed in terms of names of people she was with and activities she engaged in, unlike those of us who piece together personal recollections with visual and written fragments to craft a story. The book is organized into three major parts that correspond to her development: Growing Up, Becoming an Educator, and Research and Writing; each section comprised of several chapters rich in details and historical context, with the theme of social (in)justice running across all chapters. The experiences she describes are unique because of who the author is, a Brooklyn-born Puerto Rican, the circumstances of her parents’ journey, arriving separately by boat and meeting subsequently in Brooklyn, in the early Depression years. However, some of the challenges the family experienced are common to other diasporican migrants, such as dealing with poor housing conditions and a special needs child.

Sonia assumed responsibilities as a young child that are common to im/migrant children. She served as the official family translator, and assisted her mother with the care of her physically and intellectually challenged younger brother. It was during those early years that Sonia’s journey into teaching began informally, but also formally as an undergraduate at St. John’s University, where she majored in elementary education. However, near the end of the semester she applied for and was awarded a scholarship to study in Madrid, where a casual encounter on a train would change the course of her personal life. Returning from her year abroad, Sonia was sent by the Board of Education to teach in a middle school in Ocean Hills-Brownsville, in the midst of its struggle for decentralization. Assigned to a 7th grade class due to a high attrition rate, Sonia confronts the unimaginable, that she is an ill-prepared novice teacher of 7th graders who have learned not to respect teachers because teachers have not respected them. It took about a year for Sonia to let the students teach her how to teach them, and while she eventually was successful, the experience taught her life lessons she would bring to her work as a teacher/educator. It so demoralized and exhausted her that she was determined to leave teaching, when she was offered a teaching position as a bilingual teacher in an experimental, bilingual elementary school in the South Bronx, where the majority of the students were Puerto Ricans. Assigned to a 4th grade class she was prepared to teach, and surrounded by supportive colleagues who shared in the excitement of being pioneers in a program where Spanish was as important as English, was a dream come true. After four years, now the mother of a toddler, she sought a position closer to home, and so she applied for a position as “curriculum specialist” and instructor in the Puerto Rican Studies Department at Brooklyn College. However, as she admits, her stay at Brooklyn was more about “political struggle and activism,” and less about teaching. Even so, she realized that she wanted to stay in higher education, but it required a doctorate. She applied for and accepted scholarships to study at the University of Massachusetts at Amherst, an institution that offered a nontraditional, innovative interdisciplinary program she could not pass up. She completed her doctorate and worked briefly with state agencies until she was offered a full-time faculty position in the school of education. Once again, she was surrounded by a supportive community that included several New York Puerto Ricans, and so began that next phase of a scholarly life.

In the act of reading this memoir, it was inevitable to reflect on the trajectory of my own life, to gain a better understanding of it, and to learn from our similarities and understand our differences. That is the power of the memoir genre, and why Sonia’s memoir now serves as an inspiration to others who need to tell their own stories as community-conscious educators and scholars. Reading the chapter on studying in Spain, I paused to take in compelling insights, for example, that living in Madrid, Sonia became comfortable with and even “proud of” her Puerto Rican identity; and moved by reading about how she met, fell in love with, married and became equal partners in the struggle for social justice with her Angel. I could not help thinking about Che Guevara and what he says about the revolutionary being guided by great feelings of love. Sonia is a revolutionary compelled to do social justice work through her writing, inspired by her love for her community, with the inspiration and support of her life partner. As she says: “Teaching … is about commitments, service, courage and love” (pp. 130–1).

When I began to read Brooklyn Dreams, I thought I knew Sonia Nieto. She has been a mentor, a colleague and a friend since we met in the early 1990s. At the time, I was a new assistant professor, and she an established scholar. However, after reading Brooklyn Dreams, I realize how much I did not know. This 254-page memoir makes for substantive reading, with a distinctive style that is both pleasurable and informative reading. The narrative is interspersed with humorous anecdotes and poetry. The anecdote about Sonia’s mother seeking directions to the Borofel provides comic relief. Poetry is also interspersed throughout, allowing the reader access to the meaning conveyed through the economical use of words that evoke powerful imagery and emotions.  I recommend this book to all who think they know Sonia the human being, as well as those who only know her scholarship. You will walk away with new admiration and appreciation for the wonderful human being within the scholar.