Review: Recipes and Stories from Puerto Rico to the Deep South 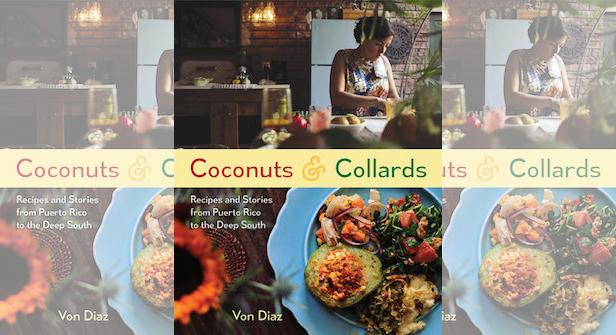 In her recently released book Coconuts and Collards: Recipes and Stories from Puerto Rico to the Deep South​, Von Díaz weaves personal stories of family, culture, identity, loss and transformation throughout recipes influenced by her southern roots.

As a child, she and her family migrated from Rio Piedras, Puerto Rico to Atlanta, Georgia. Even with yearly summer trips to Puerto Rico to visit her grandmother, Diaz never felt fully accepted on the island. And in a southern city where Puerto Ricans were scarce, she also felt an out of placeness. By drawing on the memories of being in her abuela’s kitchen, however, she found her anchor in comida criolla.

Puerto Rican cuisine has always been a melding of flavors and aromas from different parts of the globe. Díaz emphasizes essential ingredients like garlic, oregano, cilantro that invoke the island's history and culture. She also explains how staples such as plantains, olives, and yuca, reflect the island's fusion of African, Spanish and Taíno influence.

With more information about the quality of food being consumed, Diaz encourages readers to get back to healthier basics. She pauses on classic dishes like sancocho and pescado en escabeche to encourage readers to take a Do-It-Yourself approach to adobo, sofrito, sazon, sauces and stocks. She also recommends balancing meals with vegetarian options, like a simple but tasty chayote squash hash. Her zest for authentic flavors beckons readers to put down the can and instead take a crack at opening a coconut. Díaz assures that the rewards outweigh whatever damage is done to a knife or drill, and recounts her adventures in making homemade coconut milk.

What’s most unique about this latest Puerto Rican cookbook is its southern flare. Diaz’s culinary sensibility was shaped by Miss Donna, the mother of a childhood friend, who was disowned by her family for marrying a black man. Ms. Donna was eager to introduce her to classic Southern dishes like hoecakes (“Johnny cakes”), chitterlings and black eye peas. She presented young Díaz with several variations of grits to taste until one prevailed.

Von Díaz takes a sharp turn from both her Puerto Rican and southern roots by offering a recipe for braised rabbit, not comida típica. But the accompaniments of funche de coco (grits) or rice connects it to her story. She also creates an intriguing Puerto Rican twist with her Southern fried chicken, marinating it first in adobo. Her suggestion to use lard to fry the chicken will raise a lot of eyebrows, but she also provides other options for preparation.

Along the way, Díaz learned that even in times of scarcity and sadness, food can be a source of creativity and relief. When her father left the family, it plunged them further into poverty. While her mother worked extra hours, Diaz, the eldest of two siblings, learned to create savory meals from limited options that included boxed mashed potatoes, macaroni and cheese, and hot dogs. For Puerto Ricans who understand what it’s like to throw a fried egg on top of rice, these stories will be all too familiar.

Another challenge that Díaz marks through food was the loss of her marriage. It was during a visit to Yabucoa that she met the kind and perceptive Chef Berto, a kindred connoisseur of food, and began feeling the signs of healing and rejuvenation that come with comfort food.

Overall, Coconuts and Collards is more than a cookbook, it is a memoir and also love letter to the places and people that have nurtured Díaz’s palette and passion for life. It is a story of discovery and self realization that uplifts through food—both the familiar and creative re-imaginings of it.

What is also clear is what Von Díaz and many have concluded: that identity is not fixed and culture is where you make it. The once lamenting of being from ‘neither here nor there’ is transformed into being from anywhere and everywhere, and yet still being Puerto Rican—as this Boricua Georgia Peach clearly illustrates.