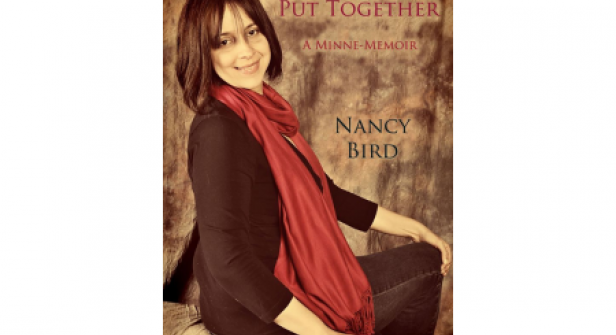 By Sandra I. Sousa

I read Neil Genzlinger’s “The Problem with Memoirs” in 2011, and it almost stopped me from ever sitting down with a memoir again. But I’m glad that I have an erratic memory and had long since had forgotten about his article. Otherwise I would not have picked up and savored Nancy Bird’s recently published “mini” memoir, Put Together: A Minne-Memoir. I would have deprived myself of an extraordinary excursion into the “ordinary” experiences of a twenty-something Puerto Rican woman adapting to a new life in Minnesota.

It’s worth a quick look at Genzlinger’s high-brow prescription for the memoir as a genre. According to him, “There was a time when you had to earn the right to draft a memoir, by accomplishing something noteworthy or having an extremely unusual experience or being such a brilliant writer that you could turn relatively ordinary occur­rences into a snapshot of a broader historical moment. Anyone who didn’t fit one of those categories was obliged to keep quiet. Unremarkable lives went unremarked upon, the way God intended.” Genzlinger’s opinion with which I am not in complete disagreement is that in our age and time almost everyone feels entitled to share their personal stories, even if nothing truly out-of-the-ordinary has happened in most of them.

No doubt we live at a time when our personal selves stand at the center of the world, so much so that many of us have transgressed into egocentrism. Genzingler may be objecting in part to this seductively postmodern infraction, but I suspect that even he would judge less harshly the sharp focus on the self as propagated by the many memorialists of the Romantic age not all of whom could showcase lives similar to Coleridge, Wollstonecraft or Napoleon. To me at least it remains clear that memoirs written by “unremarkable” people during the Romantic period embody value today precisely as windows into the kaleidoscope of everyday life that often fails by definition to appear in the superheroe’s saga.

Yet I also fear that, when push comes to shove, Genzlinger would persist in filtering out, from among past as well as present memorialists, those with only “ordinary” lives to recount. “Sure,” he admits, “the resulting list has authors who would be memoir-eligible under the old rules. But they are lost in a sea of people you’ve never heard of, writing uninterestingly about the unexceptional, apparently not realizing how commonplace their little wrinkle is or how many other people have already written about it.” Genzingler disregards the palpable circumstance that temporal and spatial differences between authors and readers romantics and postmoderns, Puerto Ricans and Midwesterners can turn virtually any ordinary experience or thing into something exceptional.

The most glaring problem here is that Genzlinger neither understands nor accepts that the “old rules” are just that old rules and that the genre of the memoir has changed. The memoir is adapting to twenty-first century lifestyles, to new social needs and to new ways in which people share their experiences. Yes, all of these have become more individualistic. And, yes, they are increasingly governed by a new social order influencing how people relate to each other a disposition of bodies, emotions, minds and objects derived from the demands of neoliberal capitalism. Maybe Genzlinger is right to feel stressed out by the growing avalanche of memoirs written by “ordinary” people about their “undistinguished [lives].” But his is the stress of those who don’t like to acknowledge change. Isn’t it so much easier to stick with what we know, to our comfortable little habits?

I could muster a big list of counter-arguments to Genzlinger’s position, but I will restrict myself, for the sake of space, to only two. First, if we were to accept Genzlinger’s aristocratic view of the memoir, wouldn’t we also risk accepting an undemocratic vision of culture and society, one that returns us to a not so distant past there’s really no need to travel all the way back to Absolutism or the Middle Ages when we consider all of the dictatorships of the twentieth century? Under tyrannies the right to express oneself, especially in published writing, belongs to just a few “enlightened” ones, to those individuals who through some kind of doubly divine intervention are blessed with God’s gift of a “distinguished” life and the State’s permission to tell the whole world about it?

It should be apparent that Genzlinger is not just defending limitations on access to the written word as form of property, but that he is also putting himself on the pedestal of those who believe they can discern the oh-so-fine line between good memoirs and trashy memoirs. This line serves to separate the high-culture people from the pop- or low-culture people: in short, between the overworld and the underworld. Yet nobody obliges Genzlinger to read all of those “uneventful” and “unremarkable” memoirs, so why is he bothering to complain about them?

And here is my second counter-argument: It seems obvious that, especially with the genre of memoir, we are dealing with intensely subjective relations of writing and reading. What reader occupies so objective and omniscient a place that she or he can adjudicate a memoir and its author as “ordinary”? The memoir that leaves one reader ho-humming and unimpressed may nonetheless rouse and inspire another reader. Genzlinger laments the repetitions and commonalities to be found across the bulk of memoirs, but aren’t our lives series of repetitions? Yet don’t those recurrent experiences comprise an important foundation of our human ability to empathize with each other? The stories of great lives are just that: great. We learn from them; they enlighten us; and such reward is appropriate. To what extent, however, do we always share a deep connection, empathy, or solidarity with those stories and lives? Genzlinger seems to forget a huge part of what a memoir is and does if he ignores the value of those three ideas—connection, empathy, and solidarity—in defining it. And maybe that is why almost no one reads the canonical memoirs anymore! Maybe it’s because Genzlinger and other critics have sought to create a distance between the “great ones” and the “perfectly-good-undistinguished-no-shame-in-that” people like the rest of us.

I am not sure into which of Genzlinger’s categories “exceptional life” vs. “ordinary” life” Nancy Bird’s “mini” memoir would fit. I don’t know if Genzlinger would be pleased that her book isn’t a four-hundred page mega tome, or displeased that it focuses on her own experience as a young Puerto-Rican woman coming to study in the US (more specifically, to Minnesota, which, along with the volume’s brevity, explains the pun of the title). After all, Genzlinger dispenses the following advice to would-be memorialists: “If you still must write a memoir, consider making yourself the least important character in it.” Such advice, of course, raises (in a bizarre way) the question of what exactly a memoir is. At a minimum, I would answer, it is a compilation of its author’s memories, at the core of which lives a self or an “I.” This discernible self emerges distilled from, and to one degree or another, independent of, the experiences that have impacted the “I” who narrates the remembered life.

Bird’s memoir is hence about herself, but it conveys much more than only that. In a deeply controlled and, at the same time, emotional use of language, she expresses the process of discovering a new country and a new culture—a process that intertwines with the discovery her inner self. These are the memories of a newcomer woman who found the courage, at the age of twenty, to say “enough!,” “¡basta!,” “chega!” to the social and cultural restrictions that women face in her country.  Young and shy, as she describes herself, she was a woman who was not afraid of taking a “leap of faith,” and she succeeded in doing so. The process of discovering oneself, of “urgently want[ing] to get to my voice, to find it… ,” is of course nothing new in the history of memoirs, as Genzlinger would delight in reminding us. Nonetheless, it is a powerful process, and Bird expresses it in a unique way by bringing into play a cultural perspective—one that is attached to her own background in academic research done in Minnesota and, perhaps more importantly, to her personal experience of “feeling trapped within a culture that oftentimes leads to overprotection of only-daughters,” and where women are expected to fulfill the roles of dutiful housewives.

Through Bird’s memoir pages we become acquainted with the culture, society and politics of Puerto Rico, an unincorporated territory of the United States, but miles away from it in almost everything. Bird traces her cultural background, mixing the insight of her teenage self with her more disciplined and mature “I”. She raises such questions as the role of religion in society and her own path of rebellion against the daily, “automated utterances of ‘Dios te bendiga.’” She also explores the questions of gender roles and the impact of a machista culture on in the lives not only of women, but of homosexuals as well.

A discussion of race and Eurocentric perspectives is yet another topic that does not escape the wit in Bird’s memoir. As she conclusively states: “Can anything be more Eurocentric and lame than racializing everyone?”

Literature, music and cinema also play an important roles in her narrative, where we can observe a life determined to follow a pre-instinct for the world of arts, of beauty and sensibility. Bird’s memoir thus chronicles a journey of self-discovery, of the construction of identity, and of the connections between one’s variously acquired identities with those of others in life’s journey. Bird understands identity as a never-ending process that can, nonetheless, be grasped in a bounded time-space. And this, after all, might be the best way of making sense of what we were and of who we might become.

In Nancy Bird’s Put Together we meet a compelling voice, a voice that learned not only how to ask questions, but also the right to ask them. We meet someone who alerts us to the immensity of the whys in our own histories, but who reminds us that “sometimes in life, it’s not only a matter of daring to ask why, but also knowing which whys to ask.”

Bird’s memoir invites us to participate in an empathic scream against the norm, a scream that has become newly necessary in a world in which we are attacked by corporate and commoditized slogans of “respect for minorities,” for “difference in color, gender and ethnicity,” but in which we increasingly witness the power of globalization and capitalism to undermine and to ignore substantive difference, in whichever ways it may manifest itself. Our world is one where “ordinary” people now have the means to make themselves heard, but in which the “Genzlingers”—in a now tiresome new edition of dominant culture—seek to crush them until their voices become no louder than a whisper.

“Why shouldn’t we read ‘ordinary’ people’s memoirs?” We should ask Genzlinger.

I am sure Nancy Bird would reply:

“Why it is important to engage in certain interactions? What drives that desire to doodle about with words, even if with yellow crayons, and let them chart their own routes of thought into the unknown? When do soulful interactions claim their own course? And why wouldn’t they?”

© Sandra I. Sousa. Published by permission in Centro Voices on 1 October 2014.