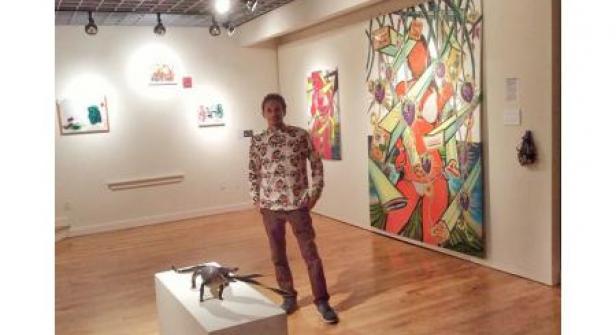 Living amongst a temperamental archipelago has me in a bit of a bind, I am stuck between three islands that embrace me or make an effort to keep me out; Manhattan, Long Island (home to Brooklyn) and Puerto Rico. Having said that, I accept any and every excuse to boricuar. But what does that mean you say? Exempt your absence by making yourself available for cultural events that point to the Caribbean, that is to say, collaborating as a means to a way: a shortcut home.

Not too long ago I was going over recent Puerto Rican emigration headlines where the stories of some emigrants ended without having even started: doors slammed in their faces, even more poverty and at times, homelessness. The culture shock turned into stagnation, situated far away from the long stories that stemmed from a fabricated sense of longing spread by our Island’s bi-partisan status quo state-of-mind.

Taking this into account, I walk New York City´s streets subtly listening to other people’s cultures through their accents, rummaging through their features, frills, skirts, short-shorts, hijabs and saris in search of gestures than not only confirm a difference but a sense of belonging. A sort of ID card misled by full-fledged body language in the form of strutting tight jeans that confidently swagger down the block while another pair of eyes are closely watched by the enclosing burka that shadows its owner. What appears to be a constant cultural clash is in reality a melting pot that feeds and strengthens neighborhoods through community action.

The same way these signs abound in New York, they are also manifest in Boston, specifically Villa Victoria, a community nestled in upscale South End. Its origins date back 50 years to a grassroots community movement still known as Inquilinos Boricuas en Acción (IBA) that was instituted to avoid urban displacement.

IBA negotiated the acquisition of a portion of the terrain in South End and destined it to the creation of Villa Victoria while guaranteeing around 600 low cost dwellings as well as control of their community and the development of health, education and art programs for its residents. IBA Arts Program Director, Elsa Mosquera, added, “The IBA is a project worth reviewing in Puerto Rico as it’s an example of success… it is impossible not to feel absolute pride.”

This organization has participated in ArtWeek Boston for the past three years and given that their philosophy includes keeping in touch with Puerto Rican artists, they invited Edgardo Larregui and MIMA to join them in this event.

ArtWeek Boston is an NGO that supports other non-profits, artists and installations as a way of reaching a wider audience. It takes place twice a year for 10 days at a time. This last event occurred from September 25th until October 4th. 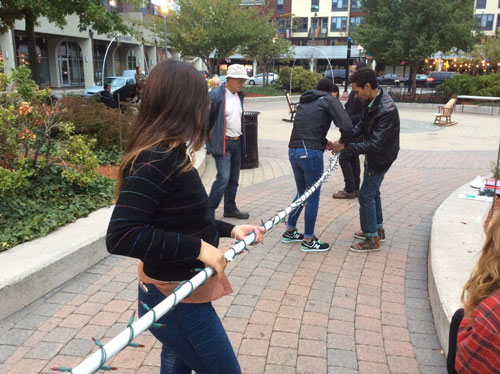 Garlands of joy
Edgardo Larregui has distinguished himself early on starting off with his workshop, Coco de Oro, at the Old San Juan community La Perla that sits overlooking the vast Atlantic Ocean. Coco de Oro focused on promoting collaboration between artists and the community. Larregui’s interventions are presented both locally and internationally including “To Be Political it Has To Look Nice” for Art General in New York (2003), “El caldo de La Perla” for Trienal Poligráfica de Latino América y el Caribe (2011) and “Espíritu de época” for Museo de Arte Contemporáneo de Lanzarote in the Canary Islands (2011).

Larregui aims to employ art as a means to questioning ongoing issues that have an impact on public life such as corruption, greed and pollution. He believes that the value of this medium is not only pedagogical but also healing.

In collaboration with IBA, Larregui offered a workshop in Villa Victoria´s Plaza Betances as part of the installations that comprised his interventions during ArtWeek Boston.The workshop was named Happiness representing just that, joy, as social awareness through public art is a topic attuned to his creations. In this piece, the participants were the residents of Villa Victoria whom labored shoulder to shoulder with the artist to create typical Puerto Rican Christmas decorations: arcos de luces.

Larregui explained that, “I take this light object and I remove it from its original context, Christmas, in order to bring about the joy and happiness that it represents.” The event also had criollo food only seen around the holiday period prepared by Villa Victoria’s residents’… pasteles and arroz con gandules.

While interviewing Mosquera over the phone, a curious idiosyncratic anecdote arose regarding the preparations for the workshop. I could almost see her smile through the phone as she explained that in theory, the materials they needed were easy to find, Christmas lights, but reality proved them otherwise. In Puerto Rico this would have been a no brainer and we both laughed in mutual diasporic understanding. Hence, they had to bite the bullet and finish the workshop a few days later. It served as a quirky reminder that happiness tends to be fashionably late, similar to our Puerto Rican untimeliness. 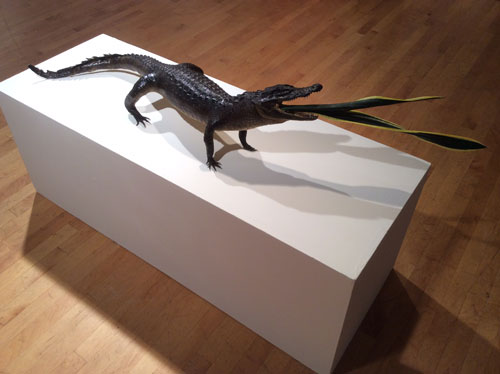 ArtWeek also included Larregui’s installation “Un final feliz” comprised of 21 pieces that were part of the following subgroups: “Dicotomía de la belleza”, “La vía histórica”, “Globalización BBQ” and “Material liberado”. These pieces recount historical events that took place in Puerto Rico, case in point, “La aventura del caimán” which exposes the commercial trade of alligators, a non-endemic species. That is to say, these predators were not part of the local fauna and as an effect of this commercial activity, they have inevitably become part of the landscape.

On a curious note, some news outlets suggest that during the 1960´s Woolworth sold them as a curiosity. A detail worth confirming.

Composer and singer MIMA offered an intimate concert as part of the IBA´s closure activities alongside cuatrista Fabiola Méndez Quiñones and bassist Ariel Ramos under Johannes Peters’s art and sound direction. Mosquera added that “The audience was amazed with her voice and artistic proposal, it was a magical night.” The evening came to an end with the artists, MIMA and Larregui, sitting through an open Q&A.

Even though I did not see MIMA in Boston, I attended her presentation in New York the following week and am able to attest that her voice is as captivating and that her musical proposals, a must.

These are just ways and means of seguir boricuando.

© Ileán Pérez. Published by permission in Centro Voices on 13 November 2015.
This article was originally published in Spanish in 80grados on 23 October 2015 under the title "Un taller para la felicidad: Artweek Boston a lo tropical."
Photos courtsey of Edgardo Larregui.