Writing the Biography of Ismael Rivera among Mythologies and Archives 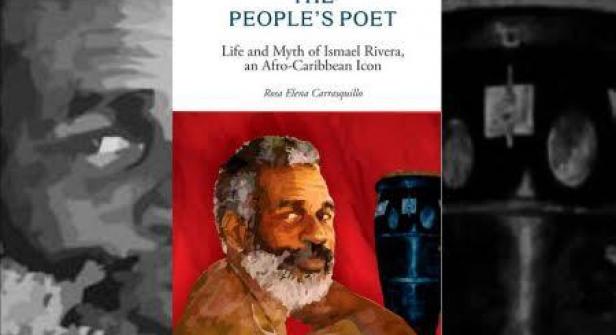 Among the pantheon of transformational musicians in the Caribbean is Ismael Rivera: the front man for El Combo de Cortijo, with whom he earned the moniker "el sonero mayor" in honor of his prowess as an improviser. Rivera is synonymous with bringing the Afro-Boricua musical form of bomba onto Puerto Rico's main performance spaces and most popular radio and television programs and using it as a basis for the creation of Puerto Rican salsa. His cultural legacy and musical artistry have been discussed in various other works, notably Ángel Quintero Rivera's Saoco Salsero, Juan Carlos Quintero Herencia's La Máquina de la Salsa, and El Cortejo de Cortijo, Edgardo Rodríguez Juliá's chronicle of Rafael Cortijo's funeral. In The People's Poet: Life and Myth of Ismael Rivera, an Afro-Caribbean Icon. Dr. Rosa Elena Carrasquillo offers the first biography solely dedicated to the life of Ismael Rivera. Tracing Rivera's personal life alongside the transformations to Puerto Rico's musical culture as well as the racial socio-politics that mark twentieth century Puerto Rico, Carrasquillo's work is a welcome and necessary addition to Caribbean cultural studies.

The People's Poet begins with Rivera's death and the momentous occasion of his funeral as a celebration of his massive impact on Puerto Rican culture; from there Carrasquillo returns to his childhood and proceeds chronologically in order to examine the many influences on his musical, personal, and political development. Divided into six chapters, only the third chapter, "Golden Years, 1954–62," focuses entirely on Rivera's career success. The periodization Carrasquillo establishes for Rivera's life in the following three chapters address his imprisonment from 1962-66, the impact of his personal struggles with drug addiction on his musical abilities (1966–79), and the decadence of his career (1980–87). Casquarillo's work is based on a rich set of interviews that she conducted with Rivera's family members and friends as well as previously unaccessed documentation of his life events--documentation that she helpfully intersperses within the narrative. These include archival materials such as images of vinyl records, newspaper articles, personal letters, and advertisements and flyers for Rivera's performances at nightclubs and concerts throughout his career. These artifacts in themselves offer a rich trove of potential analysis for future work in thinking about the change in the musical world that Rivera helped shape and popularize. Images of Rivera and his fellow musicians in various performance contexts contribute to this sense of the musical world that Carrasquillo gives the reader.

Over the course of the biography, three interwoven throughlines emerge: the development of Rivera's musical achievements as part of twentieth-century Puerto Rican music's movement from bomba to salsa, what Carrasquillo terms Rivera's heroism of daily survival (p. 4), and Rivera's self-mythologizing. It is particularly in the last thematic that Carrasquillo's deftness in working with the archives she helped to create is most evident. She manages the many conflicting stories about Rivera's life, particularly surrounding his encounters with the U.S. government, in order to foreground how Rivera constructed his persona (p. 97). These two controversial affairs were first, Rivera's dismissal from the U.S. Marines, and second, his conviction on drug charges for which he served jail time both at the Oso Blanco penal facility in Rio Piedras, Puerto Rico and in a federal penitentiary in Lexington, Kentucky. Presenting with clarity the evidence she has gathered from governmental sources alongside the various narratives that circulated about these events, Carrasquillo is able to conjoin these versions to show why each was meaningful at the time and has continued to have staying power in different contexts.

Carrasquillo offers the heroism of daily survival, in counterpoint to the self-sacrificial martyr, as a key concept for linking Rivera to Puerto Rico's social and political transformations. Throughout the biography, she identifies how his life's trajectory "mirror[s] the turmoil of his surroundings" (p. 163) to argue for the centrality of his contributions to Puerto Rican culture and history. Moreover, by offering a novel definition of heroism, Carrasquillo is able to present Rivera's personal life with all of its flaws and self-destruction while balancing those out with Rivera's drive to navigate oppressive situations and find a venue for showcasing his talent and musical ingenuity. The world-building that she weaves into the narrative is what makes The People's Poet widely accessible to a variety of audiences, both to general readers, who are provided with appropriate background information to place Rivera's story in the history of twentieth-century Puerto Rican music, and scholars who will benefit from Carrasquillo's scholarship and will also welcome the opportunity to draw on the depth of archival artifacts that she provides. Each chapter's headers and sub-headers make for easy navigation between Rivera's personal life experiences and the contexts that shaped them. While this movement is no easy task because Carrasquillo moves among three sets of contexts--the musical world, Puerto Rican society, and the diaspora experience in the United States--she manages it smoothly, telegraphing each shift to the reader. (Carrasquillo expands on this subject in the Centro Voices article "Looking for Maelo in New York"). Throughout, the intimate and specific details of Rivera's life are woven into these broader contexts as Carrasquillo proposes that Rivera's biography seemed to reflect the social changes to which he was subject, particularly at fulcrum moments of transformation and in Rivera's life. This dialogic structure and the world-building it creates is one of the most successful aspects of this biography of Rivera.

Carrasquillo begins the narrative with the intriguing proposal that "the deads are agents of their own history" (p. 1), and the inclusion of Rivera's own words throughout is a possible manifestation of this methodology. Moreover, Carrasquillo's argument that Rivera began to carve out his mythology while still alive, particularly in his creation of various stories and ideas surrounding his dismissal from the U.S. army and his arrests, is particularly evocative in this regard. However, the affective qualities of the narrative as well as the interpretations of Rivera's interpersonal relations seem to be influenced not only by the dead but the living: Carrasquillo makes extensive use of interviews with his family members, particularly his sister, Eugenia Ivelisse Rivera. Ivelisse Rivera directs the Fundación Ismael Rivera, itself dedicated to preserving Rivera's memory and pledged to "preserve, disseminate, and protect our Best Improviser Ismael Rivera's singing legacy" (p. 197), and in many ways, The People's Poet works in tandem with the Fundación and its aims. As Carrasquillo notes explicitly at the outset of--and throughout--the biography, she was able to access personal documents because she had Ivelisse Rivera's approval and assistance; and the documents that she accessed from various archives and governmental agencies are now housed at the Fundación as part of their collection. On occasion, these close relationships impact the narration somewhat to its detriment, as descriptions of family members and Rivera's relationships with them are conveyed through direct quotations without critical commentary, as, for example, when his role as a father is limited to brief quotations from his spouse Virginia, and eldest daughter (p. 76). More broadly, however, the overarching impetus for the relationship between The People's Poet and the Fundación is for the biography to amplify the archive of Rivera's musical achievements and personal life. As such, it provides a strong model for how scholarship can participate in cultural activism as well as an important contribution the field of Caribbean studies.

© Jeannine Murray-Román. Published by permission in Centro Voices on 15 January 2016.