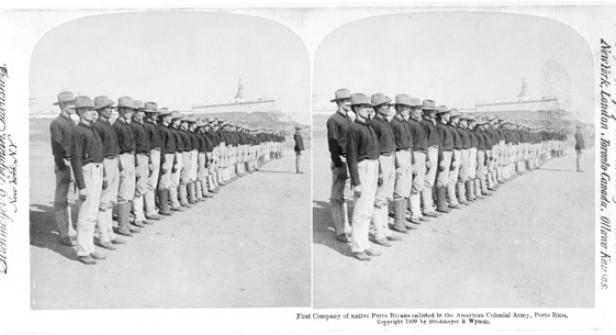 After the American invasion in 1898, Puerto Rican elites quickly volunteered the population for military service. Cayetano Coll y Toste, as civilian secretary to Brigadier General George W. Davis, the military governor of Puerto Rico, claimed that he encouraged Davis to form a battalion of native volunteers to replace the American troops in the island while touring Spanish military installations. In fact, the process of organizing a native military had been initiated under Davis’ predecessor, Major General Guy V. Henry.

Additionally, the first proponent of Puerto Rican military service in the U.S. military was a foremost champion of independence, Eugenio María de Hostos. On January 20th, 1899, Hostos, as one of the Puerto Rican commissioners traveling to Washington to discuss the future of the island, urged President McKinley to reduce the American occupation forces and to create a native militia of at least 300 men.[1]

May 20, 1899
General Davies published General Order No. 65 authorizing the formation of the battalion of Porto Rican Volunteers. The order set the unit’s strength at four companies, A, B, C, and D, with 100 men each. [2] The first volunteers came from the town of Lares,[3] where anti-Spanish and pro-independence sentiment had been strong since the second half of the nineteenth century.

The American administrators had great hopes for what Puerto Ricans wearing U.S. uniforms may accomplish. Charles H. Allen, the first appointed Civil Governor of Puerto Rico, communicated to the U.S. Secretary of War, Elihu Root that by wearing the U.S. Army uniform, Puerto Rican soldiers were to spread pro-American feelings among the population. The native soldier, Allen stated, had become:

…an object lesson to the communities in the neighborhoods of their posts… and from that standpoint, as from many others, has undoubtedly been a very potent education influence. Each man of the battalion will be a committee in himself to spread among the natives, stories of American prestige… The soldiers feel a pride in their service and there is an undoubted stimulant by it toward general loyalty.[4]

With the support of the local elites and the new colonial administrators, Puerto Ricans started to serve in the U.S. military in batallion strength.

Continue to Developments to World War I