Developments to World War I 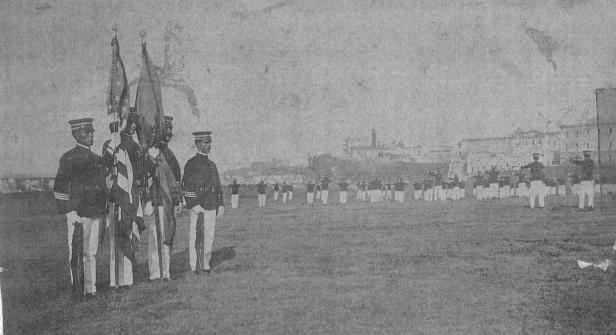 General Order No. 34 of February 12, 1900, allowed for the creation of a cavalry battalion composed of companies E, F, G, and H and stationed in Henry Barracks in the mountain town of Cayey.[1] The order also changed the name of the Porto Rico Battalion to the Porto Rico United States Volunteers (P.R.U.S.V.). The reorganization and renaming of the battalion preceded the Foraker Act of April 12th of that same year. Besides creating a civilian government in Puerto Rico the Foraker Act made Puerto Ricans, U.S. (American) Nationals and Porto Rican citizens.

Over the following year, the Puerto Rican volunteers replaced the Continental Americans troops garrisoning outposts throughout the island. [2] In 1905, all American soldiers in the island, but their commanders, were natives of Puerto Rico.

The Porto Rico Regiment of Infantry

On July 1, 1908, under authority of an Act of Congress approved on May 27, the Porto Rico United States Volunteers officially became part of the regular army and was named the Porto Rico Regiment of Infantry United States Army. There would be no more organizational changes until World War I.

Continue to World World I

[2] By February 23, 1901, Continental American troops remained in the island but their role was limited to support duties. Hospital, signal, and artillery detachments, and an infantry battalion were all that was left of the occupation forces by of December 15, 1900.