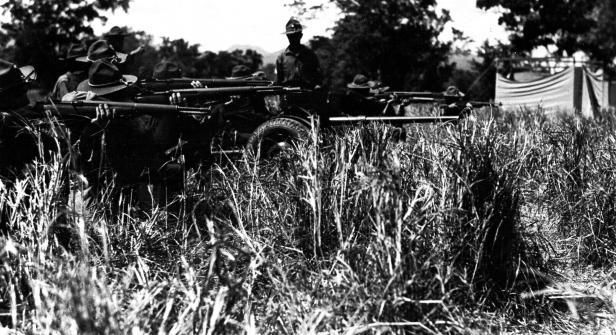 The winds of war, even before the juggernaut of the German and Japanese militaries became apparent and the U.S. slowly started to ready itself for war, made Continental politicians more open to finding solutions to the island’s plight – and to avoiding a repetition of the 1930s’ political violence. Thus, war brought the promise of political and economic advancement by rekindling Puerto Rico’s strategic value.

The U.S. Navy planned to stop naval aggression far from the mainland in what it called the Caribbean Sea Frontier. The waters surrounding Culebra island, a Puerto Rican municipality lying off the east coast, would be the stage for such a battle. Puerto Rico effectively became the center of the Hemispheric Defense Strategy, and the first American line of defense against German or Japanese aggression. The importance of Puerto Rico in the defensive plans of the United States is best expressed in a presidential letter to Congress dated September 28th, 1943:

When the present war became imminent, however, it was obvious that the chain of islands stretching in a great arc from Florida to the shoulder of South America, enclosing the Caribbean Sea, formed a vast natural shield for the Panama Canal, suited in distance and conformation to the use of the military plane. And of the island shield Puerto Rico is the center. Its possession or control by any foreign power - or even the remote threat of such possession - would be repugnant to the most elementary principle of national defense.[1]

The fortification of the island became a priority, and by 1939 the construction of multiple army, naval, and air bases was well on its way.

1925
Under the name of Fort Miles, this installation became a permanent base of the U.S. Army on the island under the name of Fort Buchanan (first commander of the Porto Rico Regiment of Volunteers). During WWII, it served as Headquarters of the Department of Puerto Rico and as induction center.

September 6, 1939
A major air base capable of handling all types of military planes was known as Borinquen Field or Puerto Rico Air Base No.1, became operational at Punta Borinquen in the northwest city of Aguadilla. This installation provided the U.S. with a southern air route to Africa and Europe via Brazil.

1940
Fort Bundy was built to serve as general headquarters for coastal artillery units in eastern Puerto Rico. Camp Salinas (later renamed Santiago) and Camp Tortuguero opened to serve as training centers for the National Guard and Army units on the island.

January 1, 1941
Loosey Field was established east of Ponce in the southern coast. In 1940 and 1941 airports were built in Arecibo and Vega Baja respectively to support Camp Tortuguero and to provide an airbase for anti-submarine warfare.[2]

1939 – 1943
With a cost of over $50,000,000 the War Department built Isla Grande Naval station (originally intended for naval aviation) near San Juan Bay. This facility housed the 10th Naval District and the Caribbean Sea Frontier headquarters. Protecting the Panama Canal, the Venezuelan Oil fields, and trade in the area were the main responsibilities of this naval command.

1941 – 1943
At a cost of over $10,000,000, the Department of War built Roosevelt Roads Naval Station comprising installations in Culebra and Vieques islands and the town of Ceiba on the east coast. This base was intended to provide maritime control over the whole Circum-Caribbean area and to host the British government and military in case Great Britain fell to the Germans.

Continue to The Impact of War on the Economy

[1] Senate Subcommittee of the Committee on Territories and Insular Affairs, A Bill to Amend The Organic Act of Puerto Rico Election of Governor: Hearings on S. 1407, 78th Cong., 1st sess., (Amherst, University of Massachusetts: Microform Collection), 16-25 November, 1st December 1943, 7-8. Hereafter S.1407. The statements were delivered in September 28th, 1943 in a Message from the President of the United States on Progress on Puerto Rico, and included as part of the hearings.