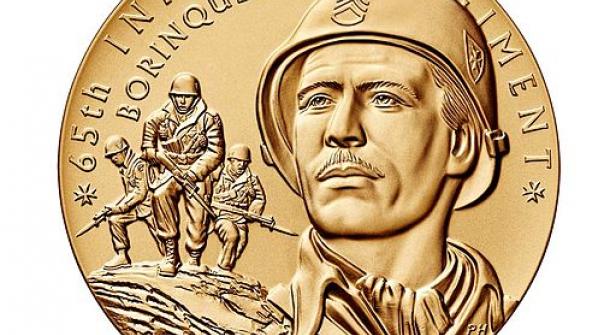 On June 10th, 2014, President Barack Obama signed bills H.R. 1726 and S. 1174 awarding the Congressional Gold Medal to The 65th U.S. Army Infantry Regiment, el sesenta y cinco de infantería. Since the American Revolution, Congress has commissioned Gold Medals as its highest expression of national appreciation for distinguished achievements and contributions. Since George Washington received it in 1776, only 158 individuals and entities have been awarded the medal to date. Few combat units have earned this accolade. The 65th is the first unit to receive it for service during the Korean War and they join Roberto Clemente as the only Puerto Rican or Latino/a recipients.

The medal has been awarded to other famous minority units including the Tuskegee Airmen, the Navajo Code Talkers, the Nisei Soldiers, and the Montford Point Marines. The Borinqueneers are the first unit from the Korean War to receive the award. The ethnicity and race of former recipients is no coincidence. All of these recipients fought during times of crisis to defend a country that at the time treated them, at best, like second class citizens. The medal recognizes the valor and sacrifice of units like the African-American marines and aviators whose bravery in combat, at a time when lynching was common and racial segregation the norm, disproved the myths of racial inferiority and unfitness for military service; Navajo code talkers, who at a time when their language was prohibited in Indian and reservations schools used it for communications in the battlefield and saved countless American lives; or Japanese-American soldiers who volunteered to join the army and requested combat duty while their families were kept in internment camps. The Borinqueneers made a similar contribution. The men of the 65th were willing to pay the ultimate price at a time when Puerto Ricans were openly labeled in the press and in academic circles “a problem” to be dealt with.

On June 13th, 2016 the Congressional Gold Medal was unveiled in Congress’ Emancipation Hall. The Borinqueneers went from forgotten soldiers who had to face both the enemy and discrimination, to heroes earning praise from Congressessional and military leaders.

Dr. Frank Bonilla, the 65th , and the Center for Puerto Rican Studies are connected in many ways. Bonilla was born in New York in 1925. His parents had met on a boat from Puerto Rico to New York in 1918, part of the World War I exodus to the East coast. World War II had already started when Bonilla was drafted into the Army. By then he already spoke English, Spanish, French and German. He made it to Europe--not with the 65th but with the 75th Infantry Division. In this unit he experienced racial discrimination.

He participated in the Battle of the Bulge in December 1944. And in January 1945, he fell of a truck and got hurt. He was then sent back to a hospital in France and later to a replacement depot. Along with maybe a dozen other Puerto Ricans he was reassigned to the 65th Infantry. He did not know about the Borinqueneers then. Few people did? But his experience with them changed his life. He noticed the men of the 65th coming to attention when La Borinqueña played. To him the 65th operated as a Puerto Rican unit. Even the food was different- and he enjoyed the rice and beans the regiment’s cooks always seem to find. In the middle of a war that took him all the way to France, Belgium and Germany, Frank felt at home in the 65th.

He spent about eight months in Puerto Rico with the 65th before going back to the United States. He came back to New York changed by his experience with the Borinqueneers. He also went back to college and married a Puerto Rican woman and lived in the Bronx. He earned a Master’s degree from NYU and a Ph.D. from Harvard University. He eventually founded the Center for Puerto Rican Studies, at Hunter College in 1973. Centro’s mission is to recover and preserve the history, art and culture of the stateside Puerto Rican communities.

In interviews with Noemi Figueroa Soulet and the Veterans’ project conducted by the University of Texas, Bonilla expressed that he always felt that he had found his Puerto Rican roots when he was assigned to the 65th. Though Frank Bonilla’s story may sound exceptional, his story is like that of hundreds of thousands of Puerto Rican men and women who have worn the uniform. Like them, Frank Bonilla used his experience to open up spaces and to fight for more opportunities for our stateside and island Puerto Rican communities, or at any other locations where Puerto Ricans choose to settle.

And for that we are forever grateful.

Veterans or their relatives can register and download the 65th Infantry Census Form to receive the Congressional Gold Medal.

Continue to introduction of The Puerto Rican Experience in the U.S. Military

The role of military service in the establishing, spreading and the socioeconomic profile...
Puerto Rican Soldiers: A Review of "Ethnic and Racial Minorities in the U.S. Military"

I was still a kid when I woke up one morning to find out one of my older brothers was...