The Impact of War on the Economy 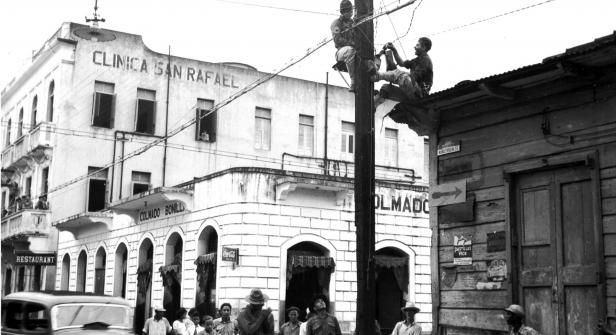 Before the military mobilization of the Puerto Ricans became relevant for Puerto Rico’s economy and society, a labor mobilization through federal programs and war preparedness took place. [1] Historian José L. Bolívar Fresneda has demonstrated that during the period 1939-1948 instead of state or national capitalism - as most of the historiography on the period argues - a military economy dominated the island and served as a transitional phase between agrarian and industrial Puerto Rico. He has shown that military expenditures on the island, (in particular funds assigned to the construction of military installations) and repatriated rum excise taxes, saved Luis Muñoz Marín and the Populares during the critical years of 1942 – 1944, and were responsible for the creation of the infrastructure needed to industrialize Puerto Rico in the post-war years. It also created a pool of over 50,000 men who trained and worked on modern construction and building industries for the first time and would be essential during the post-war industrialization phase.

In 1939, FDR requested 1.48 billion dollars for the WPA (at the national level), 10 million for the Puerto Rico Reconstruction Agency (PRRA) and 68 million dollars for military expenses in Puerto Rico. The WPA spent 43.6 million in Puerto Rico in just four years. The WPA employed 36,552 workers in 1942. These workers earned between $19 – $33 a month which compared very favorably with the wages for workers in the sugar industry ($33), tobacco ($18) and needle industry ($19).[2] By March of 1942, naval installations’ construction workers started to earn $2.25 per a day which was at least 40% more than the workers of the sugar industry. Since sugar cane workers only worked for seven months, construction workers’ wages were in fact more than double of the sugar workers.[3]

In 1942, without federal intervention the economy would have collapse. In that year, the WPA employed 36,552 workers to provide service and build military installations while federal expenses in the island more than tripled pre-war year expenses (which were still marked by war-preparedness) going from 33.3 million dollars in 1939 to 110.1 million dollars in 1942.[4] In December of 1942, however, the White House announced that the WPA would end early the next year (August in Puerto Rico). This was detrimental to Puerto Rico’s economy which did not have any military industries.[5] 1943 would prove to be the worst year for Puerto Rico in economic terms. Military expenditures in the island and revenue from repatriated rum excise taxes, which totaled over one billion dollars during the 1938-1948 period, kept the island’s economy from collapsing during the war years.[6]

The military economy created the right conditions for social change, economic development and political progress.[7] But the key to postwar development was the mass military mobilization of Puerto Ricans and it would prove essential to the Populares’ reconstruction and political plans. The role of the soldiers went beyond offering economic relief and the promise of future development. When Muñoz Marín, as president of the Puerto Rican senate, called the Puerto Ricans to arms he did not appeal to their sense of duty as “Americans’ or “U.S. citizens” as it was the case during WWI. Instead he appealed to the virility of the Puerto Rican men who would join with other peoples, including the people of the United States, to defend their rights and freedoms. As Jorge Rodríguez Beruff has argued, Muñoz Marín saw war as emancipatory. In similar fashion to how Pedro Albizu Campos and countless champions of independence had perceived war, he saw the people of Puerto Rico as a valiant people, and combat as an opportunity to face hardships which would strengthen their virility.[8]

Continue to Mobilizing the Puerto Ricans

[1] During the war period State-owned factories (5 in total) were not a crucial, but an auxiliary component of the economy. Throughout this period the investment in these factories was but 10.7 million dollars which resulted in the creation of just 992 jobs. During the war period, Puerto Rican rum came to dominate the U.S. markets and that allowed for a dramatic increase in government revenues. Military expenses and revenue from repatriated rum excise taxes were over one billion dollars. Rum reimbursements and military expenses dominated the period. The Jones Act of 1917 had established that excise taxes paid by exports to the United Sates were to be returned to the insular government. Bolívar Fresneda. La economía de Puerto Rico, 205-257, 208, 211, 219, 229-30, 243-48; and Bolívar Fresneda, “Las inversiones y los programas militares,”163-64; and, Ayala and Bernabe, Puerto Rico in the American Century, 143-44.