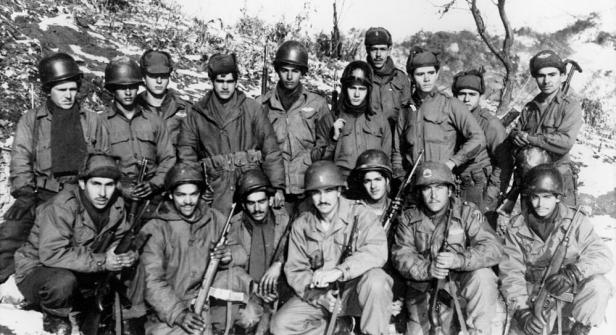 In the aftermath of World War II, Japan’s 35 year long colonial rule over Korea came to an end in 1945. The United States and the Soviet Union divided the county along the 38th parallel. Both super powers established regimes sympathetic to their respective economic and political ideologies. North Korea became the Democratic People’s Republic of Korea. The south came to be known as the Republic of Korea.

On June 25th, 1950, during the twilight hours before sunrise, North Korea’s dictator, Kim Il Sung, sent the Soviet-trained and equipped North Korean People’s Army (NKPA) across the 38th parallel into South Korea. About 75,000 NKPA soldiers quickly overran most of the Korean peninsula, forcing South Korean and U.S. forces into a small perimeter in Pusan.

As the first “hot” war of the Cold War era, the Korean War pitted the Communist bloc against the West and its allies. The Soviet Union supplied and provided technical assistance to North Korea while China sent over a million soldiers to bolster the North Korean Army. At first, the United States and South Korea fought alone against North Korea. Eventually, the war would be fought under the United Nations’ flag.[1]

The United States was caught unprepared to deal with the crisis as it had quickly demobilized its vast military after World War II, and was suffering an acute shortage of manpower. The Eighth Army, the only force the United States had available to thrust into combat, was not prepared physically or psychologically for battle in the summer of 1950.[2] The gravity of the moment and the manpower shortage influenced the U.S. military’s decision to send the 65th Infantry and tens of thousands of Puerto Ricans into combat.

Continue to The 65th goes to War

[1] Joseph Stalin, the leader of the Soviet Union, supported North Korea’s aggression thinking that “it would benefit the geopolitical position of the USSR in the Far East.” In a gross miscalculation, Stalin believed that the United States would not intervene. Vladimir Zubok, and Constantine Pleshakov, Inside the Kremlin’s Cold War: From Stalin to Khrushchev, (Cambridge Massachusetts: Harvard University Press, 1996), 54, 65.

[2] Clay Blair, The Forgotten War, America in Korea 1950 – 1953 (New York: Times Books, 1987), 88 – 89. Major General Edmond L. Almond, the commander of X Corps during the Korean War, believed that when war broke out, the U.S. Eighth Army, the only force the United States had available to thrust into combat, was just 40 percent effective. Official army documents, however, seem to have overrated the readiness and strength of the four divisions composing the Eighth Army. The 1st Cavalry Division appeared on paper as being 84% combat ready, while the 7th, 24th, and 25th Infantry Divisions had 74, 65, and 72 percent ratings, respectively.