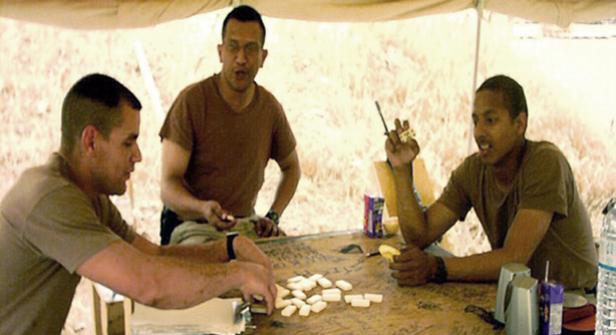 Active duty military personnel, veterans and their families have dispersed the Puerto Rican population beyond what has been considered as traditional centers of Puerto Rican migration. New York, Florida, New Jersey, Pennsylvania and Massachusetts continue to host the largest populations of stateside Puerto Ricans.. But large Puerto Rican communities have formed and are thriving around military bases in el Nuevo South (the former original confederate states), the Midwest and Western states. Moreover, our findings show that military service also works as a pathway to middle class status for Puerto Ricans.[1]

Puerto Rican military personnel and veterans are indeed changing the landscape of the United States and opening new space, in terms of location and opportunities, for the Puerto Rican diaspora.

A Path to Middle Class Status

Military service works as a path towards middle class status, as I have argued elsewhere. Overall, the veteran and military Puerto Rican population enjoys a higher quality of life in terms of income, educational attainment, employment rate, and home ownership than its non-veteran counterpart. In terms of median income, male island-based veterans have a clear advantage over male island-based non-veterans. Island-based female veterans, on the other hand, have a median income over 50% higher than that of island-based non-veteran females, and have almost the same income as non-veteran Puerto Rican males in the United States (Franqui-Rivera 2014).

Though this project does not delve into the Puerto Rican experience in recent conflicts it is noteworthy to point out that island and stateside Boricuas have participated in every conflict to the present day. They have become the pillars of new communities dotting the United States, from traditional Diasporican centers in the eastern seaboard to what we now call El Nuevo South--or the former states of the Confederacy.

National Guard Unit prepares to ship out overseas from Texas as part of the Global War on Terror.
Video courtesy of Hector Calderón

Puerto Rican Veterans and Service Members’ Wellbeing and Place within the Diaspora, in Edwin Meléndez and Carlos Vargas-Ramos, eds., Puerto Ricans at the Dawn of the New Millennium, Centro Press, New York, (2014).

The role of military service in the establishing, spreading and the socioeconomic profile...
Puerto Rican Soldiers: A Review of "Ethnic and Racial Minorities in the U.S. Military"

I was still a kid when I woke up one morning to find out one of my older brothers was...