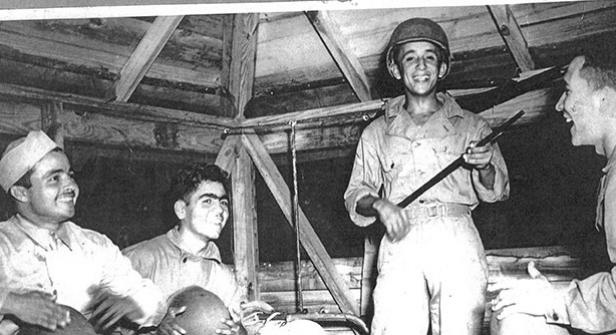 As it happened in World War I, Puerto Ricans responded enthusiastically to the call to arms.

The metropolis and the Allies’ propaganda, the effort of the local elites to mobilize the peasantry and urban workers, the dire economic situation and a tradition of service combined to drive the Puerto Ricans to the recruiting stations. As the United States began the readiness process Congress approved the voluntary enlistment of 375,000 men and the conscription of another 128,000. Puerto Rico’s conscription quota would be 3,600 white and 1,200 black Puerto Ricans. However, volunteers would not be accepted beyond those required to bring the 65th Infantry to war strength. Military exercises conducted between 1939 and 1940 showed that the National Guard units were in disarray with the exception of the Puerto Rican National Guard which was rated as “superior”. However, as Marín Román shows, the War Department did not want to utilize the Puerto Rican units.[1]

The 65th goes to Europe 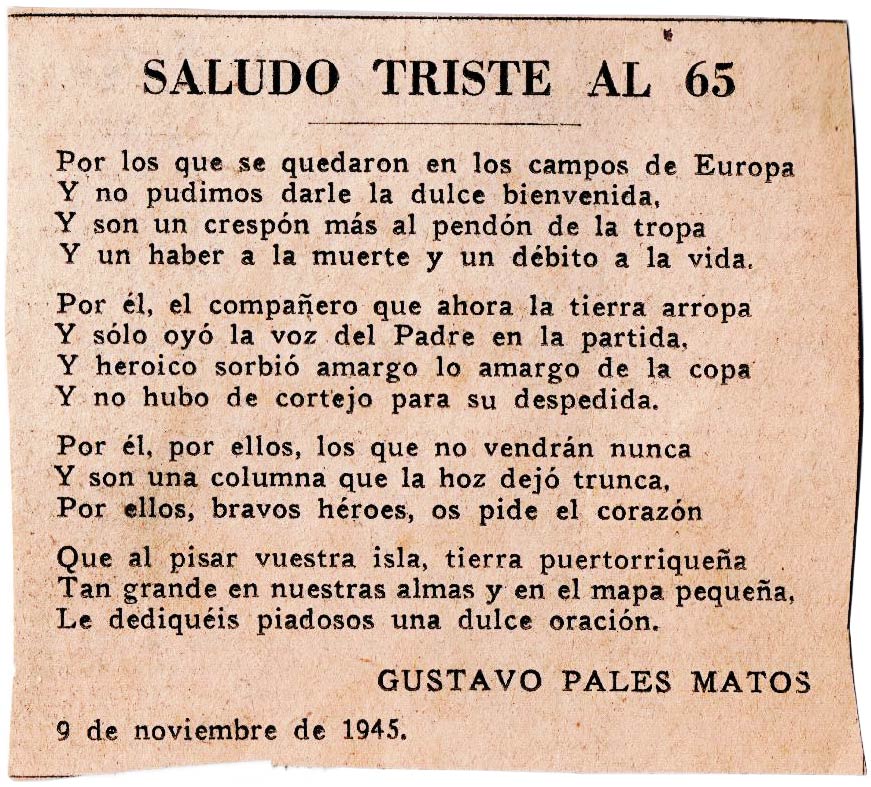 The 65th Infantry saw more varied service in World War II. The regiment began the war in its accustomed mission of home defense in Puerto Rico and was quickly brought to war strength. It was attached to the U.S. Army Second Army Corps and transferred to Panama from January 7th to December 30th, 1943. The 65th received intensive training, especially in jungle warfare. The regiment also provided training for officers and enlisted men of Latin American armies who were sent to Panama to learn the tactics of the U.S. Army.[3]

The regiment then moved to Fort Eustis, Virginia, and went through a two-month combat infiltration course. In March of 1944, the 65th moved to North Africa, where it received amphibious training. It then moved to Italy. In September of that year, the 65th shipped out for France.

Regardless of all the training given to the 65th, the regiment got into combat only once during World War II. On December 13th, 1944, the 3rd Battalion, 65th Infantry (3/65) was committed to action in the Maritime Alps at Peira Cava. There, the 3/65 suffered 47 battle casualties.

The end of World War II found the regiment in the Saarbrucken area undergoing intensive training in village fighting and attacking fortified positions.[4]

Although the 65th had performed well, the army high command still viewed the regiment as a “Rum and Coca-Cola outfit.”[5] Most of its time was devoted to occupation duty, anti-sabotage, and security missions-duties performed behind friendly lines. The men of the 65th had to content with being what General William W. Harris called “the palace guard.”[6]

Upon their return from Europe, the 65th was received by thousands of Puerto Ricans crowding the streets and waving Puerto Rican and American flags. Among those returning from Puerto Rico was Frank Bonilla, founder of the Center for Puerto Rican Studies at Hunter College, CUNY (1973). He grew up in New York and during World War II was sent to a continental unit. Once in Europe he was transferred to the 65th. Observing the Borinqueneers’ sense of pride, when they heard La Borinqueña and the enthusiasm of the sea of people receiving them in Puerto Rico made Bonilla more aware of his puertorriqueñidad.[7]

295th and 296th Regiments of the Puerto Rico National Guard

The regiments 295th and 296th of the P.R.N.G. were called into active service in 1940 and gradually took over the 65th’s responsibilities, first in the island and later on throughout the Caribbean Basin. The 295th, served mostly in the Caribbean, including Panama, Jamaica and the Dutch Caribbean islands. The 296th trained for war in the Pacific but the war ended with the men waiting deployment in Hawaii. Even though the P.R.N.G. had been rated superior during the exercises and evaluations conducted between 1939-1940, the military was reluctant to use Puerto Rican units or to send large numbers of Puerto Ricans to fighting units.

During the war, it was the general attitude that Puerto Ricans, as colored troops, were not suited for combat duty. The Bureau of the Budget’s report on the inductee program on the island declared that: “Puerto Ricans obviously are not as valuable as Continentals for Army service because of lower educational and physical standards, racial and historical traditions and background, aptitude, etc…” [8]

Not only did the War Department believe that their race poorly suited non-whites for combat duty, but that it also made them intellectually inferior to Continental white soldiers. Though the same regulations, with regard to schooling were applied to Puerto Rican recruits, and then doubled, Continental officials still believed that Puerto Ricans were deficient in intellect which they blamed on the recruits’ race.

The War Department’s low opinion of the Puerto Ricans was set before recruitment began. In the Puerto Rican Induction Report prepared by the Bureau of the Budget in 1945, it is stated that the Puerto Rican inductee “admittedly, was not generally suited for front line duty” but would valuable for other duties and “thousands of potential actual combat U.S. Continental personnel would thereby be released from secondary services.” [9]

Few Puerto Ricans (especially those in Puerto Rican units) saw combat during WWII because of the racial prejudice of the era.

Famous war correspondent Ernie Pyle wrote while been treated at a medical station during the invasion of Sicily, Operation Husky, July 9 - August 17, 1943:

There were many kinds of human beings among the wounded in our clearing-station tent during the time I spent there. We had a couple of slightly wounded Puerto Ricans one of whom still carried his guitar and sat up on his stretcher and strummed slightly on it. There were full-blooded Indians, and Negroes, and New York Italians, and plain American ranch hands, and Spanish Americans from down Mexico way.[10]