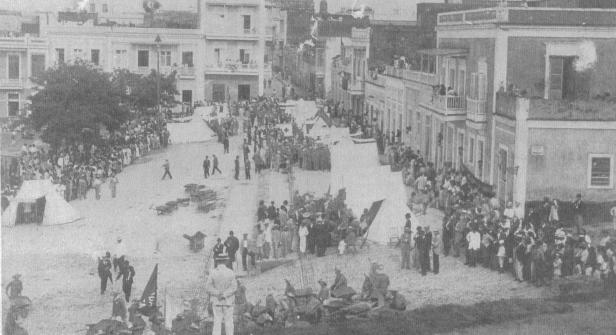 El Grito de Lares of September 23, 1868 was the most significant revolt against Spanish rule in Puerto Rico. It was quickly suppressed but it had important consequences for the island. The confrontation left eight rebels dead and two milicianos wounded. Fighting against milicianos and civilians, the rebels lost the only engagement of the revolt. Disconcerted by the unwillingness of the milicianos to join them and recognizing that without them on their side, they could not possibly defeat the regular peninsular troops on the island, the rebel army quickly melted away. Scattered in the mountains and with no hope of a general uprising or aid coming from the exterior, the rebels who initially escaped capture, eventually surrendered. Over 500 rebels were imprisoned. Eighty died while in custody due to poor sanitary conditions. Seven were sentenced to death, but by virtue of a general amnesty, all rebels were set free by January 1869.

After the failed insurrection of el Grito de Lares the Spanish authorities in Puerto Rico took the opportunity to disband the Puerto Rican militias. This ended Puerto Rican popular participation in the defense of the island.

By closing the military to natives of Puerto Rico the Spaniards created a common denominator for those born on the island; exclusion by birthplace. Barring los hijos de este país from the military was more damaging than any other form of exclusion by the colonial administration since it affected the majority of the population not just a small criollo elite.

By following exclusionary policies the Spanish colonial authorities made more obvious the differences between peninsulares and Puerto Ricans, lost the opportunity to co–opt Puerto Ricans into serving Spain, and ultimately promoted the development of Puerto Rican national identities. In effect the combined exclusion of Puerto Ricans from the colonial administration and the military undermined the loyalty of the inhabitants of the island and kindled the development of a sense of national unity vis–à–vis the Spaniards.

When the Americans invaded on July 25, 1898 a majority of Puerto Ricans had neither the inclination nor the skills to help the Spaniards keep Puerto Rico under the Spanish flag.

Continue to The Spanish-American-Cuban-Filipino War of 1898

Officially, Puerto Ricans started serving in the United States military in 1899 with the...
Origins

El Grito de Lares and the Demobilization of the Puerto Rican Militias under Spain El...
The Spanish-American-Cuban-Filipino War of 1898

In the aftermath of the Spanish-Cuban-Filipino-American War of 1898 , the United States...
Battalion of Porto Rican Volunteers

After the American invasion in 1898, Puerto Rican elites quickly volunteered the...
END_OF_DOCUMENT_TOKEN_TO_BE_REPLACED