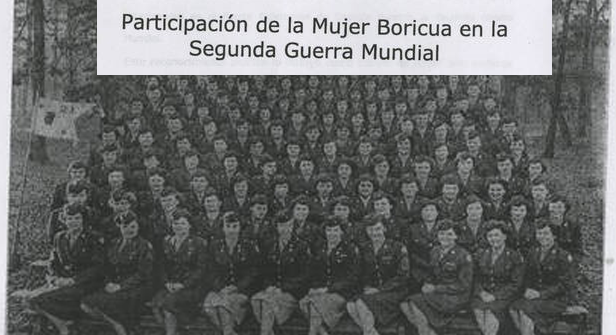 World War II required the total mobilization of the population. That included women who maned the Home Front by taking over tasks, jobs, and professions closed to them until that point. Women also served in most belligerent countries’ militaries as nurses, drivers, clerks, training pilots, and as soldiers.

After the United States entered the conflict the U.S. senate approved a bill that became law on 15 May 1942. It called for the recruitment of women to form an auxiliary unit known as the Women’s Army Auxiliary Corps (WAAC) which eventually received active-duty status as the WAC.

The bill set a recruitment goal of 25,000 women for the first year. That goal was quickly exceeded. Thus, the Secretary of War increased the goal to 150,000 volunteers.

Puerto Rican women served in the WAC during WWII. In 1944, the Army sent recruiters to Puerto Rico to recruit 200 women for the (WAC). AS it had been the case in the mainland, Puerto Rican women promptly applied, and more than 1,000 applications were received.

The Puerto Rican women composed the unit, Company 6, 2nd Battalion, 21st Regiment of the Women's Army Auxiliary Corps. Like their active-duty counterparts, the 65th Infantry, they were a segregated Hispanic unit in the U.S. Military. After completing their training, they served mostly as Army clerks and secretaries engaged with the logistics that sent American soldiers and provisions throughout the world.

After the war, WAC soldier and then professor Carmen García Rosado wrote, "LAS WACS: Participación de la Mujer Boricua en la Segunda Guerra Mundial" in which she narrates her and her peer’s experience as WACs.