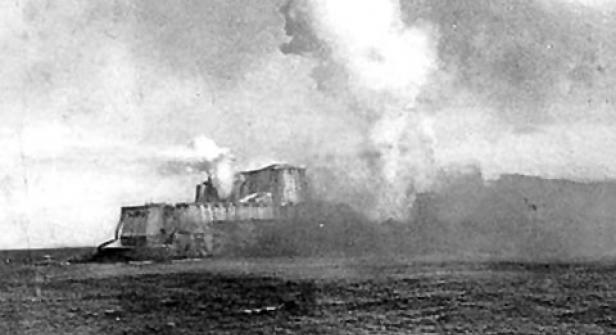 In 1898, the United States went to war with Spain after the second class battleship U.S.S. Maine exploded in Havana Harbor, Cuba, on February 15, 1898.Cuban rebels had been fighting for independence since 1895 and by all accounts had all but won the war. According to Valeriano Weyler, supreme commander of the Spanish forces in Cuba, the rebels “had brought the Spanish army to the brink of defeat.”[1] The rebels were so certain of their inminent victory that they rejected Spain’s offering of autonomy.[2]

July 13, 1898
The 35,000 troops that made up the Spanish garrison in Santiago de Cuba surrendered. At the time the war was practically over. Even U.S. top strategist, Admiral Alfred Thayer Mahan conceded that there was nothing else for the Spaniards to do but to surrender.[iii]

There was no need to invade Puerto Rico to win the war. The U.S. had achieved such military superiority over Spain that Admiral William T. Sampson opposed Miles’ request for armored vessels to escort his transports to Puerto Rico.[iv] Still, Miles received the order to proceed to Puerto Rico on July 18, and the island was invaded seven days later. The motive for such action was to occupy the island before the end of hostilities prevented the U.S. from doing so. Quickly after the destruction of the Spanish fleet in the Pacific Assistant Secretary of the Navy and future veteran of the Cuban campaign and U.S. president, Theodore Roosevelt, wrote a personal letter to Senator Henry Cabot Lodge urging him not to make peace until ”we get Porto Rico.” Lodge assured Roosevelt that the administration was “fully committed to the larger policy we both desire.”[v] President McKinley’s administration had decided to annex Puerto Rico “in lieu of indemnities” and the physical presence of the U.S. military in the island would undoubtedly strengthen the U.S.’ position. That Puerto Rico came to be a possession of the United States did not stem from historical accident but rather from a calculated design.

In Puerto Rico a new regime had been inaugurated on February 8, 1898 and general elections were held on March 27 of the same year. These elections were held under the provision of the Autonomic Charter of 1897 which granted a high degree of self-government (régimen autonómico) to Puerto Rico. On April 21, 1898, scarcely two months after the inauguration of the autonomic government, the Governor General of the island declared Martial Law. On July 17, 1898, constitutional guarantees were reinstated and the Insular Parliament was inaugurated in an attempt to secure the loyalty of Puerto Ricans before the Americans invaded the island.

On July 18, the Spanish asked the French government to approach the United States with a request for a cease of hostilities as a preliminary step to peace negotiations. The French ambassador to the U.S., Jules Cambon, communicated the Spanish request to the White House in the afternoon of July 26. President William McKinley rejected the offer for it did not say anything about Puerto Rico or the Philippines. On July 30, through the office of the French ambassador, McKinley delivered armistice terms to Spain demanding that it relinquish control of Cuba and cede Puerto Rico, other islands in the Caribbean and the Ladrones in the Pacific. Spain answered on August 1, inquiring if any other territorial indemnification could be substituted for Puerto Rico to which Washington responded negatively. Defeated in the Philippines and in Cuba and unable to win in Puerto Rico, the Spaniards agreed to American terms, and an armistice went into effect in August 12, 1898.[vii]

By virtue of the Treaty of Paris of December 10, 1898, which officially ended the state of war between the United States and Spain, the former gained full control over Puerto Rico, Guam, Wake Island, and the Philippines, and control limited by the Teller Amendment over Cuba. Spain officially relinquished control over Puerto Rico and on October 18 of the same year the change of sovereignty was completed with the evacuation of the last Spanish troops and the raising of the American flag in all public buildings. That day witnessed the inauguration of a military government which lasted until May 1900.

Puerto Rican Participation in the Invasion

Puerto Ricans were not passive observers during the American campaign in the island. President McKinley’s administration enlisted the help of Puerto Ricans to advance the campaign in Puerto Rico. Before and during the invasion of Puerto Rico, the American forces organized three Puerto Rican corps charged with facilitating the invasion and the war effort in the island. The first group, the Porto Rican Commission, was composed of a dozen Puerto Ricans and presided by an American. The PRC mediated between the population and American soldiers, explained the aims of the war, and try to convince the native population to support the U.S. Once in Puerto Rico, General Miles ordered the creation of a volunteer group known as the Porto Rican Scouts. The PRS, a cavalry unit included of seventy men, were attached to General Theodore Schwan’s brigade. Miles also ordered the creation of the Porto Rican Guards to keep the public order and named a Puerto Rican as the unit’s commanding officer.[3] Puerto Ricans also volunteered as skirmishers, provided intelligence, and organized small foot and mounted raiding parties across the island which scourged the Spaniards and their allies by burning their plantations and stores and seizing their property.[4] These actions hindered the Spanish defense and accelerated Miles advance.

Puerto Ricans would continue to serve in the U.S. military.

[2] Prime Minister Cánovas del Castillo, emboldened by the death of the Cuban rebel general Antonio Maceo on December 6, 1896, offered very limited autonomy to both Cuba and Puerto Rico. The Cuban rebels immediately rejected the overture and eventually so did the autonomistas in Puerto Rico, who also decided not to participate in the elections. Cánovas del Castillo’s offer convinced most of the autonomistas in Puerto Rico of the need to make a pact with Sagasta and the liberal fusionistas. See Carmelo Rosario Natal, Puerto Rico y la crisis de la Guerra Hispanoamericana (1895-1898), (P.R.: Editorial Edil, 1989), 146-153.

[4] The partidas sediciosas (seditious units ) had the effect of forcing the voluntarios (volunteers), who had been deployed far from their communities, to abandon their posts and return to their lands to protect them from these attacks. See; Trask, War with Spain in 1898, 356, 359-60. At first these parties were of spontaneous and independent nature or sanctioned by the Americans and engaged in sabotage against Spanish lines, and giving logistical support to the U.S. Army. There were also parties who sided with the Spanish Army but they were mostly “voluntarios.” Historian Fernando Picó has found some groups formed completely on Puerto Rican initiative. Both the pro-American and pro-Spanish parties had to procure their own supplies which led to the ransacking of haciendas and appropriation of cattle. As the war ended the parties continued the raids in what is known as the tiznados (black faces). These latter parties did in fact engage heavily on personal, economic, and political revenge which was exemplified by the burning of credit and debt books, as well as haciendas and plantations. See; Fernando Picó, 1898: La guerra después de la guerra, Segunda Edición (Río Piedras, P.R.: Ediciones Huracán, 1998), 86-92.

Officially, Puerto Ricans started serving in the United States military in 1899 with the...
Origins

El Grito de Lares and the Demobilization of the Puerto Rican Militias under Spain El...
The Spanish-American-Cuban-Filipino War of 1898

In the aftermath of the Spanish-Cuban-Filipino-American War of 1898 , the United States...
Battalion of Porto Rican Volunteers

After the American invasion in 1898, Puerto Rican elites quickly volunteered the...
END_OF_DOCUMENT_TOKEN_TO_BE_REPLACED