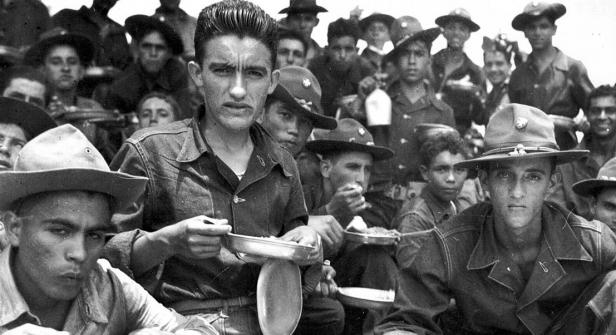 World War II was the most defining event of the 20th century. It was the first total war. The war was fought on land, sea, and in the air. It was fought with all kinds of arms and weapon systems, as much as with propaganda. Practically every corner of the world was visited and scarred by this war. The world’s economy was geared towards the production and support of the largest armies, naval and air forces ever assembled. Entire cities were destroyed. Whole ethnicities were targeted for imprisonment or to be exterminated. Civilian centers were targeted by all major belligerents. By the war’s end over 60 million people had been killed by bombs, swords, bullets, gas, and starvation.

World War II started in Europe in 1939 with the Nazi invasion of Poland. Japan, Nazi Germany’s ally, had been on the offensive in Asia since 1931. On December 7th, 1941, Japan attacked the American naval base in Pearl Harbor, Hawaii, and almost succeeded in crippling the U.S. Navy. The next day President Franklin Delano Roosevelt asked Congress to declare war on the Empire of Japan. On December 11th, Adolf Hitler, Germany’s dictator, declared war on the United States.

The United States soon mobilized its people, territories, and its economy. It would deploy millions of men, and tens of thousands of tanks, trucks, jeeps, planes, and naval vessels throughout the world. By the war’s end the United States had mobilized 16 million men and women. The U.S. and the world were profoundly changed by the war. Puerto Rico was no different.

During World War II, even before the United States became an active belligerent, Puerto Rico played a crucial role supporting the American defense plans and supporting the Allies. Because of its military relevance, World War II was a catalyst for socio-economic and political change in Puerto Rico. With the exception of Franklin Delano Roosevelt’s decision to transfer the island from the War Department to the Department of the Interior on March 1934, no major changes to Puerto Rico’s political relationship with the metropolis had occurred since 1917, when Congress extended U.S. citizenship upon the Puerto Ricans and created an elective insular legislature through the Jones Act.[1]

Photo caption: Soldiers of The 65th Infantry after an all day schedule of maneuvers at Salinas, Puerto Rico. August 1941. Photo credit: CMH.