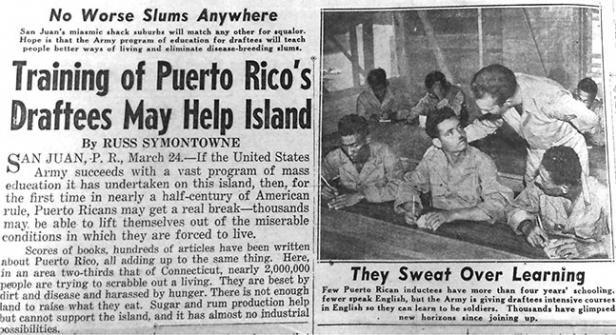 The G.I. Bill in Puerto Rico

The Servicemen’s Readjustment Act was finally signed into law by President Roosevelt on June 22nd, 1944. The Veterans Administration became responsible for carrying out the law's key provisions: education and training, loan guaranty for homes, farms or businesses, and unemployment pay. Millions of veterans who would have flooded the job market after the war suddenly had the option of attaining college and vocational education. According to the Veterans Administration, in 1947, “veterans accounted for 49% of college admissions. By the time the original GI Bill ended on July 25th, 1956, 7.8 million of 16 million World War II veterans had participated in an education or training program.” Furthermore, between 1944 and 1952, the VA “backed nearly 2.4 million home loans for World War II veterans.” More compelling, few veterans “collected on one of the bill's most controversial provisions—the unemployment pay. Less than 20% of funds set aside for this was used.”

The enrollment in the University of Puerto Rico (UPR) increased 24% from 5,869 students in 1941-42 to 7,300 for the year 1944-45, and it would continue to expand mostly in part to accommodate a growing veteran population - which now had the means to go to college.

The total veteran population for the academic year 1947-48, rose to 2,074 students. The next year 2,307 were attending the UPR. The importance of these thousands of soldiers who received technical training went beyond that of providing technicians. They subsidize the schooling of thousands more since their tuition, books and other expenses were paid in full by the Federal Government which allowed the UPR to expand in other areas while keeping tuition rates low and offering scholarships.

The Military as a School and Maker of Modern Men

"Soldier Ocasio, citizen Ocasio, jíbaro Ocasio, soldiers and citizens and jibaros in all the hills in Puerto Rico, in all fronts and camps throughout the world, you are Puerto Rico's hope.“