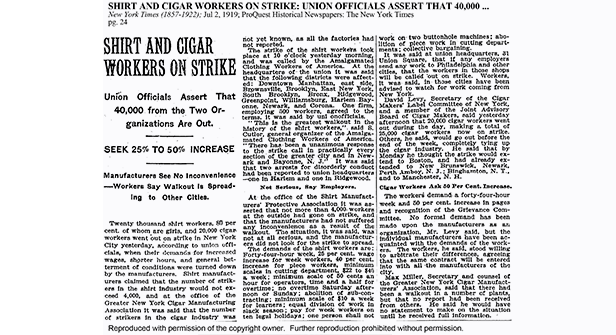 Cigarmaking and related tobacco work were very important to Puerto Rican workers and their families in New York before the Depression but their overall importance declined significantly by the mid 1920s. With the growing Puerto Rican presence, union politics among cigar workers became even more important. Most cigar work was hardly the romanticized trade of high wages, autonomy and intellectual life that is sometimes found in accounts, including Bernardo Vega’s. Most cigar workers worked long days in bad conditions under intense employer pressure that sought “to make slaves out of them.”[1] But the culture of militancy, solidarity and the cigar worker’s openness towards anarchist, socialist and communist ideas made for a cosmopolitan world in which their distinct Hispanic identity mingled with many others.

Men in the industry were organized through one of the AFL’s core unions, the Cigar Makers International Union, forged in the fire of a two-month long strike in 1877.[2] The CMIU had a commitment to fight racial and ethnic discrimination and a long history of organizing male Spanish-speaking workers in Florida even before Puerto Rico was brought into the US empire.[3]  But this commitment was compromised by the CMIU’s limited size and their exclusion of women, which Cooper called “self-destructive.”[4]  It also followed a careful policy in which strikes were discouraged, and militant impulses from the shop floors kept under control.

The trouble in NYC had started in early 1918 with conflicts between CMIU leaders and large sectors of the rank and file. A growing number of insurgents demanded a change in the rules and the establishment of grievance committees in the shops. In addition, they wanted support to go on strike whenever they found that shop conditions justified it. Most of the 6000 Hispanic cigar workers, considered to be mostly Cubans and Spaniards (and a few hundred Puerto Ricans), were in support of this faction.

In the summer and fall of 1919, workers at dozens of workshops and factories went on strike and created a “tidal wave” of mobilizations unsanctioned by the CMIU.[5] ByJuly seven thousand cigarmakers were on strike, and eventually 25,000 tobacco-related workers, in a rare united show of force. Strikers included women machine operators, and union and nonunion members. They demanded a shorter work week, a 50% increase in wages, a citywide pay scale, and the withdrawal of US troops from Russia.[6] Mass meetings and support actions were organized by the multiethnic, multilingual workers in New York City, then the center of the general strike which had spread to the Tri-State area. After the strike began, organizers held two days of meetings at their headquarters at the Labor Temple on 241 East 84th Street, right next to the Socialist Hall. From the Labor Temple, organizers dispatched activists to shops that had not yet joined the strike.[7] Pickets, celebrations and political meetings accompanied the strike with speeches in English, Spanish, bohemian, Yiddish and Italian.

Strike organizers were “antagonistic” to the CMIU, something that greatly worried employers as they saw the movement as “closer to those of the IWW”—a national militant union organization which had been suppressed by government agents and employer violence earlier in the decade.[8]

The Spanish speaking “Auxiliary,” composed of 6,000 members, had experienced a strong radical turn after the Russian Revolution of 1917.  Formerly known as “La Resistencia,” this loosely-organized coalition of “Latin” workers began in Tampa in the 1890s and extended its organizing to New York City. The Spanish Auxiliary helped organize an ad-hoc parallel union at various shops after having led various unsanctioned strikes. The work of the Spanish Auxiliary was at the core of the 1919 General Strike. The Spanish-speaking section of the strike council became known as its most militant component, unaffiliated with any organization.

CMIU officials did not withdraw completely from the strike process (that was by now out of their hands), but instead continued to work with the Spanish Auxiliary and other rivals in mass inter-shop meetings.

Shop owners claimed they were willing to negotiate wages but were opposed to the establishment of local grievance committees. They thought the Council did not have sufficient funds to hold a long strike. CMIU organizers also watched the strike carefully. They recognized that a four-month strike was unprecedented. They interpreted the strike as a massive attempt by the Council and the Resistencia to disrupt the CMIU completely. CMIU leaders even collaborated with US military intelligence giving them names of suspected “communists” in their ranks. Local 90, perceived as the most radical, was spied on by government agents.[9]