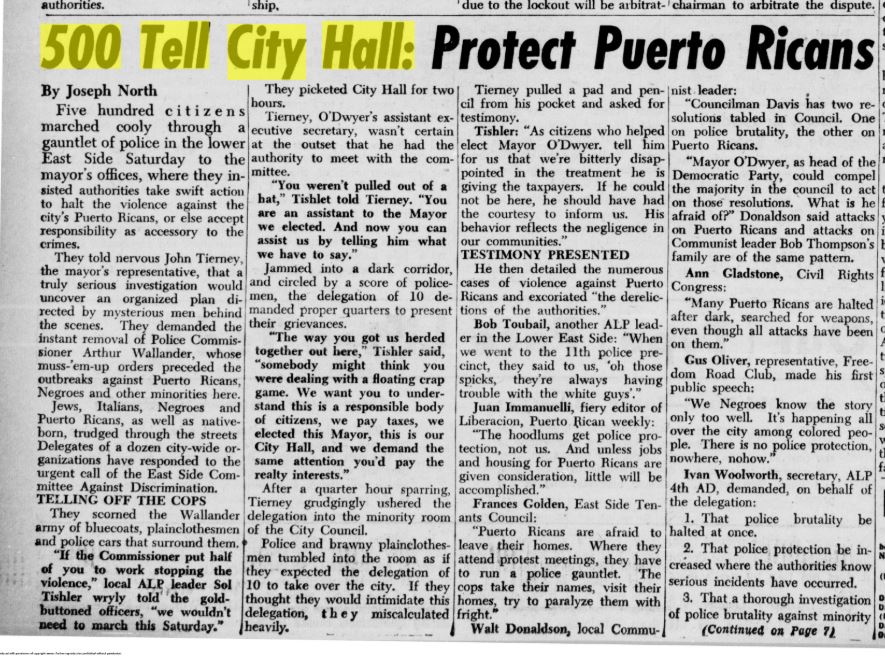 The Afro American had an alarmist headline insert: “Extra! Puerto Ricans invade NYC at rate of 1000 weekly” while the Bronx Home News screamed “Slums are heaven after Hungry Puerto Rico Swamps.” But the worst attacks came from the New York World Telegram and the New York Sun, “yellow” journalism tabloids that were notorious for their right wing leanings:  “…the sinister communist angle in the problem of the hundreds of thousands of Puerto Ricans now coming to east Harlem and other parts of this city; not immigrants but us citizens; yet thousands of them are so poor, jobless, ignorant and even diseased as to make their impact upon welfare and health authorities serious and inevitable; potential voters; of deep interest to communists, Marcantonio…easy prey for communist scouts and organizers unless sound counteracting American influences are speedily brought to bear on them.”[2] Article after article framed with this language must have created the impression among many New Yorkers that they actually had something at stake in the migration of Puerto Ricans:

“Land this morning, get on the dole tonight…that is the magnet.”

“The natives are cursed with tuberculosis and syphilis before they arrive, a Puerto Rican leper was discovered not long ago.  But once they are here, the venereal incidence is marked with rapid rise due to association with low prostitutes…”

“Journalists” Jack Lait and Mortimer wrote many of the articles which were serialized in a book New York: Confidential!:[3]

“…referring to these Caribbean wards of the nation as a plague is not prompted by prejudice, anger or careless use of phraseology.  Puerto Ricans were not born to be New Yorkers. They are mostly crude farmers, subject to congenital tropical diseases, physically unfit for the northern climate, uneducated, non-English-speaking and almost impossible to assimilate and condition for healthful and useful existence in an active city of stone and steel.”

“But the story is far more sordid.  A majority of these people were lured here deliberately, because as American citizens, they can vote. They are a power behind congressman Vito Marcantonio, until recently the only American Labor Party member of the House, who rules the wretched section into which a majority of the 600,000 have poured from leaky ships and from miserable chartered planes which are almost beyond description….The Puerto Ricans at this moment are costing New York City $12,000,000 a year in relief.  there is no residency requirement...”

The letters to the press followed. To President Roosevelt, Puerto Rico Senate President (and soon to be Governor) Munoz Marin and others, with requests that Puerto Rico be given its independence in order to solve this problem. Others in the community complained of the attacks (especially to Governor Jesus T. Pinero and Munoz Marin), while a few Puerto Ricans even agreed with the criticisms of the “bad behaviors” of many Puerto Rican migrants that gave the community a bad name.

After the initial barrage of newspaper attacks came the national magazines which toned down (for the most part) the frontal attacks but still framed the migration as a problem-creating dilemma driven by the desperation of tropical slums and plantations. Life, the Saturday Evening Post (the most rightist and the most hostile), American Magazine and others. To understand the vehemence of the attacks on Puerto Rican migrants by the right-wing press requires a larger frame. Local and national media outlets hoped to use Puerto Ricans as tokens in pre-existing political, ideological and cultural battles between Left and Right in the US. All the themes used to attack the migrants were already contested terrain in US post-war politics, and in precisely these years intense fighting raged over policies concerning immigration, welfare, the role of the state in the economy, the global role of the US, the opposition to the arrival of refugees, Jews and other displaced persons (DP’s) from post-war Europe, the welfare department, the secret power of the Communist Party, and even opposition to the construction of public housing.

Negative portrayals of Puerto Ricans as welfare dependent were part of larger battle over cutbacks to the poor and the influence of the Communist Party over unions. The loudest concern was restricting free migration of people seen as culturally and linguistically alien, who were perceived to put pressure on scarce social services and a welfare state that was still in the process of being built.

The core of the attention came from this sort of less frontal attack where the migrants themselves were not rejected but issues raised by the rapid influx of large numbers of non-english speakers. It included paid media advertisements and pressure on and from the administrative circles of judges on this question. The main driving force were the “problems” “created” by the Puerto Rican presence in New York and incipiently in other US cities.

Together, these responses shared a common nativist frame. The US (and NYC) had not received any significant migration since the start of WWI (1914)  and the country had gone through nearly two decades of intense change that helped create a stronger common identity while sharpenning both conservative and liberal arguments against immigration. It should not be surprising that a nativist response was part of conservative thinking and also a sort of common-sense approach shared by most Americans (including a significant part of the earlier Puerto Rican migrant community).

These responses were based on pre-existing issues which already divided New Yorkers. Italians had experienced similar attacks and explicit fights in the press, including one which resulted in Frank Sinatra punching Mortimer over his portrayal of Italians as criminals and of Sinatra as a Communist sympathizer because of his liberal politics.[4]  Hollywood leftists were also being attacked as fellow travelers of the Communist Party, including actor Jose Ferrer. Blacks were the constant subject of a discourse about ghettos and crime. Sensationalist, right wing and “yellow” newspapers were experts at stirring panic over these issues. The continuities of portrayals of Puerto Rican migration with those of central and southern European immigrants were obvious to many Americans involved in this debate.