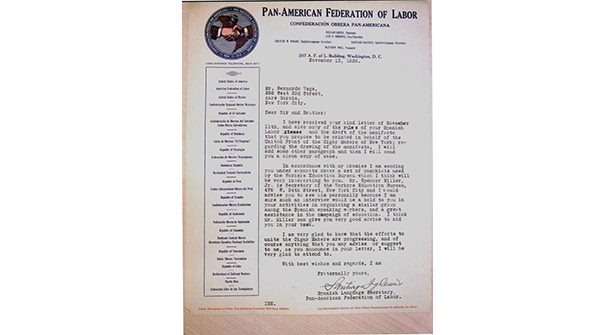 The 1919 cigar worker’s strike brought to the foreground the disaffection between workers and the main American Federation of Labor union that represented cigar workers, the CMIU. The workers behind the new Amalgamated Tobacco Workers of America (ATWA) had been among the insurgents behind the 1919 strike. Insurgents formally organized the ATWA in December of 1920, led by a faction of the more radical Italian, Jewish and Spanish speaking workers of the CMIU. The ATWA began publishing the bilingual ‘The Tobacco Worker’ in December 1920, and Puerto Rican labor leader Bernardo Vega became its secretary, a full-time organizer as well as co- editor of the new newspaper. At the founding convention of ATWA, delegate Ramirez celebrated the “spirit of the Spanish elements” and challenged the myth that they were against any form of organization. The ATWA committed to organizing the male and female machine operators in the tobacco trade, as these workers were displacing the traditional hand-rolled cigar manufacturers.[1] By 1926, the Amalgamated represented about 1200 workers in the City.[2]

Through the early 1920s, both the CMIU and Amalgamated continued organizing work as rivals, despite the overall reduction in employment and union membership. Both unions received a boost from a 1922 wave of refugee migrants from Puerto Rico, the product of the defeat of a major strike there.[3] The Amalgamated concentrated rebels against the CMIU in four states including Puerto Rico, with 4000 members.[4] The CMIU had advantages in this work, being linked with a national organization affiliated with the AFL. The CMIU continued to have Italian and Spanish-speaking sections in its battle against the Amalgamated. Bianco, a CMIU organizer who spoke Spanish and Italian noted that the Amalgamated had hired their own Italian and Spanish-speaking organizers, and that the “Latin” cigarmakers violently opposed even discussing the CMIU with organizers:  “[T]he Italian and Spanish speaking cigar makers had their minds poisoned with the activities and propaganda of our enemies.”[5]

In April 1922, employment in the industry improved somewhat. This facilitated a new organizing drive by the CMIU, encouraged by a meeting of 3000 workers and supported by the City’s major labor organizations.[6] The ATWA also continued its organizing work. In March 1925 the ATWA held a meeting of 500 members at the 84th St. Labor Temple, where leaders declared that the “old fighting spirit of the Amalgamated prevailed among those present.” The accusation that the ATWA was led by wild Bolsheviks intent on pushing for revolution was not readily apparent as the union continued to focus on working conditions and achieving the 44-hour work week.[7] When M. Perez and Co. shut out 30 workers from its factory in New York and opened a plant in Pasaic (NJ), Amalgamated’s secretary called on Passaic workers (a militant center of industrial unions) for solidarity: …we are confident that you will help us in this fight for justice.”[8]

In 1925, workers in the tobacco unions began discussions for a reunification of their unions, leading to an intense organizing meetings in the Puerto Rican and Latino community.  Organizers estimated that they reached 2600 organized workers of which 10-12% were Latinos.[9] The Committee of Social and Economic Reconstruction of the TWA involved a city-wide effort but was especially intense among the Spanish-speaking workers.  Spanish-speaking workers created the Comite de Reconstruccion Social y Economica, led mostly by CMIU leaders. They held mass meetings at the upper east side “Socialist Hall,” and rallies and workshop meetings among all cigar workers in the city.  Puerto Ricans led the work for Spanish speakers, including Jose Vivaldi, Pedro San Miguel, Blas Oliveras, all of them active supporters of the Socialist Party in East Harlem and the Partido Socialista in Puerto Rico.[10]

Despite residing in Puerto Rico, Partido Socialista leader and full-time CMIU organizer Prudencio Rivera Martinez who visited New York often was the principal moral leader of movement for reunification. He recognized that the Latino workers were the most radical element within the cigar worker’s movement.Rivera Martinez wrote a proposal to bring unity to cigar workers.  The plan offered the Amalgamated locals complete autonomy if they joined the reformed CMIU umbrella. The plan was to hold an “international” mass meeting at the Labor Temple, an effort supported by the socialist New Leader, the Italian garment workers and other labor organizations.[11]