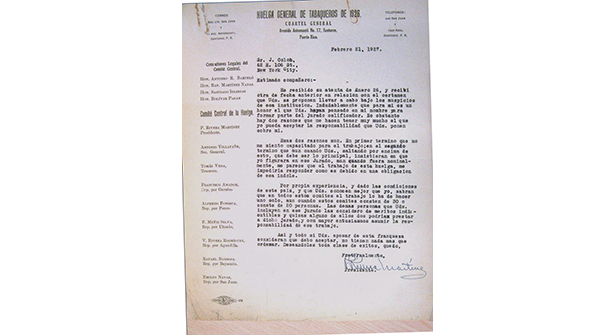 At a mass meeting of the Comite de Reconstruction at Socialist Hall E 84th; PrudencioRivera Martinez promised the support of the city’s 700,000 unionized workers. CMIU Vice President Ornburn also spoke, with translation to Spanish, suggesting that both movements should meld.[17] A mass meeting of Puerto Ricans, Cubans and Italians at the Labor Temple presented speakers from the city’s labor movement and were addressed by Pedro San Miguel as the organizer of the Hispanic Committee.[18]

The challenges these leaders faced were daunting. Gender, ethnic and political divisions within the unions were evident when workers at the Consolidated Cigar (AKA Lovera) spontaneously went out on strike in July 1925. After the strike began, Spanish speakers and many Italians confronted the “Bohemian” workers, most of them women, who fought fiercely to return to work.[19] The union initiated a picket line and propaganda effort in the press in favor of the fired workers and worked to convince the Bohemians to support the reinstatement.The company agreed to the demands.[20]

The organizing work continued between 1925-1927. Pedro San Miguel kept urging workers to seek the assistance of the committee in their local demands for better wages. The work of the Comite de Reconstruccion was intense. They held weekly meetings in order to “interersar directamente a la colonia de tabaqueros de la lengua española.”  The meetings were bilingual and in the style of “tribuna libre”—an open jam session in which all could speak. At the meetings, the all-stars of the Hispanic CMIU leaders rotated, including Pedro San Miguel, Melhado, Aviles, Simmons, and Primitivo. At one of the meetings, San Miguel reminded workers of the need to unify the organizations, pointing to the militant fight that for 20 months the CMIU had been leading in workshop after workshop, with significant depletion of its funds. A subcommittee was created for agitation in “el barrio,” making it clear that workers could join either or both the CMIU and Amalgamated.[21]

A large August rally of 400 Hispanic cigar workers featured Puerto Rico’s Partido Socialista leaders Santiago Iglesias, Prudencio Rivera Martinez, and San Miguel. At the meeting Rivera Martinez agreed with the familiar CMIU generalization that associated “latins” with revolutionary militant traditions, and Saxons with conservative politics, but this time with a sympathetic tone of support. After hours of speeches, Santiago Iglesias urged all nonmembers to join the CMIU.[22] Another meeting with Latino cigar workers featured Santiago Iglesias. At this meeting, and despite the call for unity, Santiago Iglesias ranted against the pseudo-revolutionary promises of other groups, and against communist groupings, without mentioning the Amalgamated by name.[23] Every time Santiago Iglesias came through New York (which was frequently) major rallies were held, and after the speeches the meetings turned into “parlamento obrero.” The meetings and rallies helped keep workers aware of the different, sporadic strike efforts and facilitated mobilizing their support.[24]

In early 1927, a special meeting of leaders at the Labor Temple confirmed the final reunification of Latino tobacco workers with the merger of the Amalgamated led by Bernardo Vega as a new local chapter of the CMIU, reconfirming the leadership’s commitment to organizing new shops and support for the ongoing Philadelphia strike.[25] The leadership agreement was followed by a mass meeting and celebration at the Socialist Party Hall in East Harlem in April.[26]

Unity was only a path to continued organizing efforts. In October 1927, Latin cigarmakers and the Spanish Auxiliary Committee were still calling for workers to join the CMIU.[27]  The following year, Pedro San Miguel reported how the Spanish and Latin people in many shops were afraid to join the union. He was working with Local 389 to do publicity work in Spanish, and in many publications, including the bulletin of a Hispanic society that counted 2000 members, some of which were cigar makers.[28]  The union by now had accepted the growing role of women and machines in the industry, but Latino leaders rarely mentioned organizing work among women.

By the end of the decade most of the industry had left the city, mechanized, or become non-union. Hand-rolled cigarmaking as a whole declined. In a May 1929 letter to La Prensa, Armando Ruiz, head of one of the local CMIU locals, lamented the “crisis de los tabaqueros” and the inability of the movement to bring unity or improve conditions. He celebrated Pedro San Miguel’s efforts, but blamed the indifference of many workers and declining attendance at union local meetings that could not meet quorum: “Tengamos el valor moral de declarar que marchamos hacia el caos, el desmembramiento y la ruina…”[29]