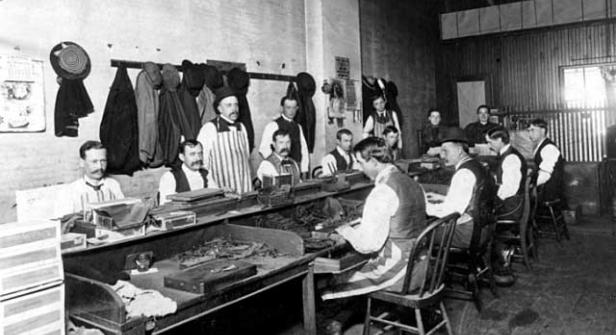 Tobacco growing, processing and cigarmaking were part of Puerto Rico’s history for centuries. Hand-rolled cigar production by men (and a few women) was an important trade of skilled artisans during Puerto Rico’s Spanish colonial period and experienced a resurgence during the first twenty years of US rule, when US corporations took over the island’s expanding trade in tobacco leaf.  Puerto Rican cigarmakers migrated in large numbers to New York and Florida, joining the Cuban and Spaniard cigarmakers who had been migrating to New York since the 1860s and who had established themselves firmly in the industry before the Puerto Ricans started arriving in the 1890s. In New York and Tampa, they formed part of a Hispanic and Southern European immigrant working class. Cigar making was the only industry where Latino workers confronted Hispanic bosses—Samuel Gompers estimated that of the 3,000 cigar factories in New York, at least 500 were owned by Spaniards and Latin Americans.[1]

The best cigar work, known as “out-and-out,” was a fully manually made cigar. Because of their connection to Caribbean methods of tobacco production, Spaniards, Cubans and Puerto Ricans were especially skilled at making these cigars with few tools, using only a knife and a board.[2] This skill made it possible to work quickly and to roll cigars anywhere and anytime, in a small shop or a large shop. Typically, they were paid by piecework, not hours worked. Cigarmakers considered themselves skilled artisans who took pride in their trade.  However, the invention of the suction machine in 1917, which could produce cigars more quickly and more cheaply, began the displacement of hand-rollers throughout the industry in the US, as well as the Caribbean.[3]  After WWI (1914-1918), the industry in Puerto Rico began to decline. Thousands of hand rollers lost their employment—reduced from 30,000 in 1918 to 7,000 in 1936. Wages also declined from a dollar a day in 1910 to $.32 -.57/day..[4] Many of these skilled workers, whose unions had been brought into the CMIU (the main Cigarmakers union in the US, affiliated with the American Federation of Labor) found that migration offered the hope that they could continue their trade in the US, where both cigar consumption and wages were relatively higher.

Continue to The 1919 Cigar Workers Strike