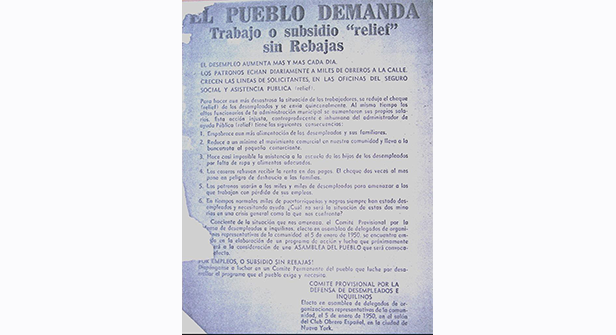 After the stock market crash of 1929, unemployment in New York City expanded dramatically. In April 1930, the number of unemployed reached 234,000 for the whole city and had grown to 540,000 by December. Two months later there were 609,000 unemployed men in Manhattan, Brooklyn and the Bronx. By the end of 1930 the citywide unemployment rate was 18% Manufacturing, a sector on which the majority of Puerto Ricans relied on for employment, had declined by 20%,[1] Conditions worsened by 1932. A modest recovery over the following two years (1933-1935) increased employment by a whopping 35% but did not restore wages and hours to pre-depression levels. Wages and employment opportunities declined dramatically for many, if not most, Puerto Rican workers in New York City during these years. Significant recovery arrived only in the late 1930s, and only then through the combined actions of the public sector and the demands made by working class movements and organizations.

Most workers saw their wages cut and their work hours extended. This meant dire conditions for food and housing, including an epidemic of evictions.  Wages, even after important concessions from employers in the mid-1930s, remained low and often lower than during the 1920s. One worker reported irregular work and hours of one dollar a day. At the GEM/ American Safety Razor factory, where chain hiring had increased the number of Puerto Rican workers during the 1920s, one Puerto Rican worker reported firings and reduced wages in October 1930 down to $17 a week.[4] At the National Container factory in Long Island City, a Latino worker reported “no puede usted imaginarse cual es la situacion de los obreros de esta fabrica.” All workers at this site faced reduced wages and a 50-hour week, with pay that ranged from $12 to $16. Workers were in shock over repeated10% wage reductions over six months.[5] Hotels had similar cuts in wages and increased hours. At the New Yorker Hotel where many Spanish speakers worked, a Hispanic worker starting as a dishwasher could earn only $15/week, about a 25% or reduction from pre-depression wages..[6]

Puerto Rican women entered the work force in increasing numbers during the 1930s, working in garment shops, laundries and food factories. Laundries offered the lowest pay at $12 to $14 weekly, and conditions were very poor. Thirteen-hour workdays, low wages for men, and even lower wages for women were common in the early 1930s.[7] Minerva migrated just as the Depression was about to start.  She preferred working in the laundries to garment work because the work was steadier.  During the Depression she made only $12-14/week for 12-hour days that included Saturday work. She had steady work during the Depression as was glad she didn’t have to rely on welfare. When she got her own apartment in 1938, she considered it an improvement. As Jews were moving out, Puerto Ricans gained access to better apartments.[8]

As income from wages declined, Puerto Rican families sought the same sorts of assistance available to other New Yorkers with citizenship rights—but cultural, racial and political obstacles were often in the way, heightened by the new institutional frameworks created by public and para-public agencies and the prejudices and preferences of those who created or administered these programs. One of the persistent themes of the 1930s was that Puerto Ricans had to fight for their share of the emerging relief and public employment benefits.