Fight Against “Exploitation,” The Industrial Unions 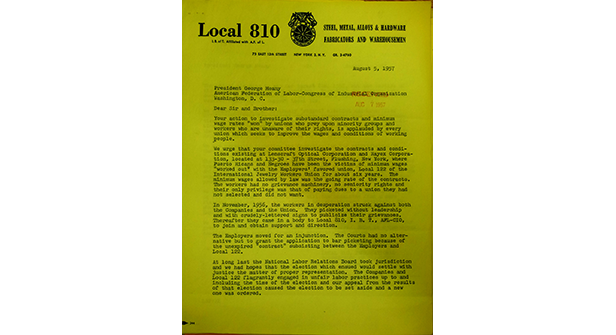 Repeatedly, the IUE and D65 and IBEW proved to be the most militant, even vehement organizers of the minimum wage plants run by racketeers, responding to as many worker demands as they could handle.  Throughout 1957, they responded most quickly to requests by ACTU, Lumen Roman, the Migration Division and workers themselves for organizing protests and decertification votes.  Their commitment did not just entail a desire to organize low-wage workers but was also driven by their perception—highlighted as a common sense idea by the Spanish Language press and the Migration Division—that the exploitation of Puerto Rican migrant workers was also a civil rights issue in which thousands of recent arrival immigrants, many with low or no skills in English, were taken advantage of by bosses and racketeers.  All the same, it had taken a confluence of forces for these workers to see that they had allies, and the explosion of complaints and mobilizations between 1957 and 1960 was comparable to the organizing drive of the immediate post-war years, with which these unions created their post-war successes.

Conflicts at Jansa Woodworking in Brooklyn, Metzger and Style Rite Optical were examples of the intense organizing battles involving multiple unions, outside allies, the NLRB and the employers.  At Style Rite Mario Abreu, District 65’s organizer, worked to free the 300 workers from their union, another corrupt local of the IJWU. The twin plants, one in Brooklyn and one in the garment district, exchanged workloads. Workers had started a strike in June when the plant owners said they were moving the plant to Queens but workers, led by Luisa Diaz, refused to support the move and instead contacted Abreu. When they brought in District 65 the union immediately negotiated a $5 weekly increase (12%) and another $3 after the first year with a minimum salary of $50.[21]

The mobilization of low wage Puerto Rican workers and the labor movement response encouraged other efforts to organize and improve conditions throughout similar, if better organized, sectors in NYC.  Garment workers, organized mostly by ILGWU and Amalgamated, were an important part of the process. In 1957 four hundred mostly Puerto Rican workers from a Bronx factory picketed the ILGWU headquarters, alleging inadequate representation.  In 1958, two hundred workers at Plastic Wear organized by ILGWU Local 132 also in the Bronx demonstrated against the exclusive use of English in the local’s meetings when 80% of the workers were Spanish speakers. Workers at the Q-T Knitwear Co., represented by the same local, carried out a wildcat strike and picketed ILGWU headquarters, alleging a sweetheart contract and the failure to hold meetings in Spanish.[22]