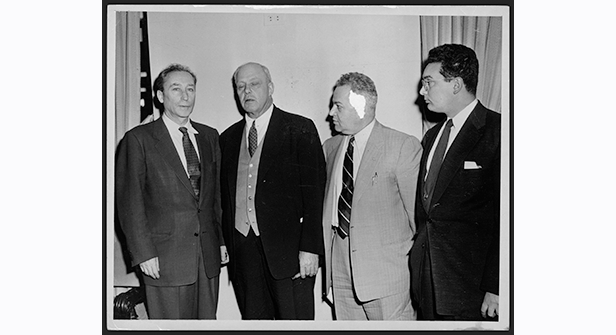 The arrival of large numbers of Puerto Ricans in New York towards the end of WWII had led to efforts by public and private agencies to help migrants and communities manage problems with jobs, housing, welfare, social services, education, language, and other needs. The opening of the Migration Division-the office of Puerto Rico's Department of Labor in the US--was a product of the both the realities and perceptions of the “crisis” of 1947, in which the Puerto Rican migrant community received a surge of “bad press” from right-wing media outlets at the same time as migration surged to unprecedented numbers.

The purpose of the Migration Division was to manage the expectations, rights and needs of migrants who considered themselves citizens of two nations. The Division office played the role of a consulate of sorts that worked both to facilitate and legitimize the US citizenship rights of Puerto Rican migrants, as much as to maintain and support the economic, cultural and ethnic coherence of Puerto Ricans as a national origin identity. A hybrid institution, the Migration Division was simultaneously an agency of the Puerto Rican Labor Department, and also became a civil rights, labor and community organization with organic ties to most Puerto Rican political and social organizing efforts through the 1960s. It was established by the Puerto Rican Legislature, Governor Pinero, Labor Secretary Sierra Berdecia and former Socialist Party leader and Director of the UPR Social Science Center, Clarence Senior. Senior became its first national director during the 1947 “crisis” in which the discovery by New York’s right wing press of the many thousands of recent Puerto Rican immigrants created a thunderstorm of rejection and “bad press” for the growing Puerto Rican community.

The Migration Division was not unprecedented. Puerto Rico’s Washington Office and Commerce Department had run an employment office in Harlem and an identification office (that provided official ID’s to migrants) through the early 1940s. There was also legislation in Puerto Rico since 1918 that allowed the insular government to intervene in the labor contracting of Puerto Ricans on the island, as well as the extensive experience with labor recruitment and contracting during World War II through the federal War Manpower Commission and the US Employment Service. These efforts were updated with Law #25 of 1947 that established the Migration Bureau within Puerto Rico's Labor Department.

Community leaders in New York City had been demanding the opening of this sort of support office as soon as the war ended. The principal civil rights and community organization of the mid-1940s, the Spanish American Youth Bureau led by Ruperto Ruiz, had organized a major campaign with Puerto Rico's government in support of a multi-service center paid and sponsored by the Puerto Rican government to help the migrants with their adjustment.[1] Left and labor leaders in New York also supported the opening of the office[2]. SAYB organizers had led the response of the NYC Welfare Council and continued to play a role in the process as allies of the Migration Division after it was established. 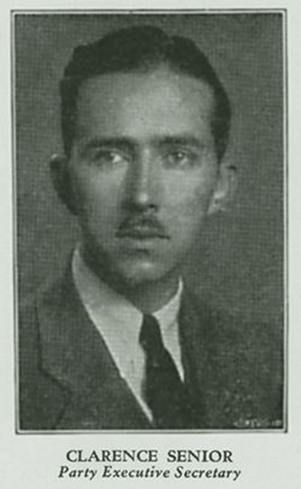 Pressure from the political and labor context of 1946-1947 spurred the PPD leaders in Puerto Rico to open the Migration Division. The attacks on the migrants by the right and the increased demand for New York’s social service and welfare and housing infrastructure encouraged Governor Piñero and his labor commissioner to open the office. Needless to say, the larger context was the pressure created by the surge of self-managed and self-financed migration from Puerto Rico. The scale and rapidity of this migration took officials by surprise and island government officials felt compelled to respond.

The Migration Division began in New York City, but later opened offices or hired coordinators in various sites with a growing Puerto Rican presence like Chicago. National Director Clarence Senior (former Director of the Social Science Research Center at the UPR and Socialist Party leader) coordinated work with city agencies and organizations and established an employment referral office for migrants already in New York. The Division also managed the US-end of the Insular Labor Department’s first big program: the replacement of privately contracted seasonal farm workers with a government sponsored contract and seasonal labor program. This work lasted through the 1970s and included negotiating and enforcing the terms of the farm worker contracts, implementing insurance, and assisting with the myriad problems faced by dispersed farmworkers brought to work in the Northeast. During the 1950s, the Division quickly expanded to include public relations, education, and community organizing. By 1959, its annual budget, paid for by the insular Department of Labor, had reached one million dollars (about nine million in today's dollars) with dozens of employees and multiple sections.[3]

The public relations office managed the public image of Puerto Ricans in New York and responded to the attacks on the migration. The education office worked with the Department of Education, while the welfare office worked with New York’s complex public and private social services infrastructure. The community organizing section worked with local communities in the entire region helping them respond to crisis or organize permanent committees. Some of the leading activists and professionals served in these offices including Eddie Gonzalez, Juan Jose Osuna, Lenoard Covello, Allan Perl and others.