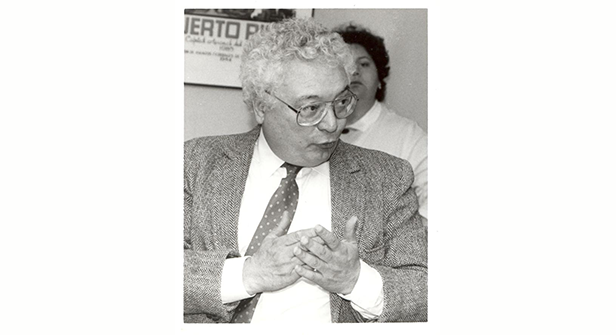 The office developed a hybrid style that combined a consular component with the projection of the welfare state goals of a colonial government undergoing rapid transformation. Leaders of the Popular Democratic Party in Puerto Rico tried to make sure that the MD appear to be a-political even though it was formall a branch of the government of Puerto Rico in New York.  In the moments of the crassest sort of political interventions by the PPD in New York (the campaign by PPD authorities against American Labor Party leader Vito Marcantonio in 1949 and 1950) they kept the office out of the campaign even as its director (Cabranes) quietly facilitated information to Munoz Marin and others in Puerto Rico.

The Migration Division helped manage the expectations, rights and needs of migrants who considered themselves citizens of two nations. In this sense, the MD played the role of a consulate of sorts, that worked both to facilitate and legitimize the US citizenship rights of Puerto Rican migrants as much as to maintain and support the cultural and ethnic coherence of Puerto Ricans as a minority. By the mid-1950s anyone involved in work involving community services, welfare and work issues involving Puerto Ricans could recognize what labor journalist Mitchel Levitas stated in his New York Post articles: the Migration Division “is irreplaceable in helping the immigrants meet the multitude of strange and frightening problems in a land that is legally their own but which is foreign almost every other way."[4]

Once Clarence Senior became National Director in 1951, he worked aggressively with the labor unions to make them responsive to their growing Puerto Rican membership. For Senior and New York City office director Jose Monserrat, unions were fundamental pillars of American society, in Senior’s own words, “unions are one of the most important single institutions to help the speeding up of the adjustment process for Puerto Ricans.” He opposed restrictions on unions including the Taft Harley law and further measures proposed in Congress during the late 1950s.[5] The Migration Division refused to refer workers to worksites on strike and preferred unionized shops, steering workers away from worksites with the most complaints.

The Migration Division’s employment section monitored jobs and wages in New York’s economy and pushed local employment services (including the critical Federal USES) to hire Puerto Ricans. Soon the work expanded to include communication with the unions that organized the worksites where the office’s clients were referred.  The office was extremely sensitive to the condition of working class immigrants and their need to integrate with working class organizations. The MD employment section learned a lot about corrupt or unresponsive unions through the claims and complaints of workers against union officials. A 1952 complaint by young Puerto Rican workers at a ILGWU Local 91 garment shop led to an investigation by the Federal Department of Labor Wages and Hours division.[6] A similar complaint arrived in November 1953 from Carmen Cuesta and 30 Puerto Rican garment workers at Joan Douglass Underwear. They were not happy with Local 62 of ILGWU and reported they made about $30/week and not paid their overtime. After the intervention of Migration Division officials and other allies, the leader of the complaint, Laura Maldonado, had been elected assistant Chair Lady and the workers were offered 10% raises.[7] 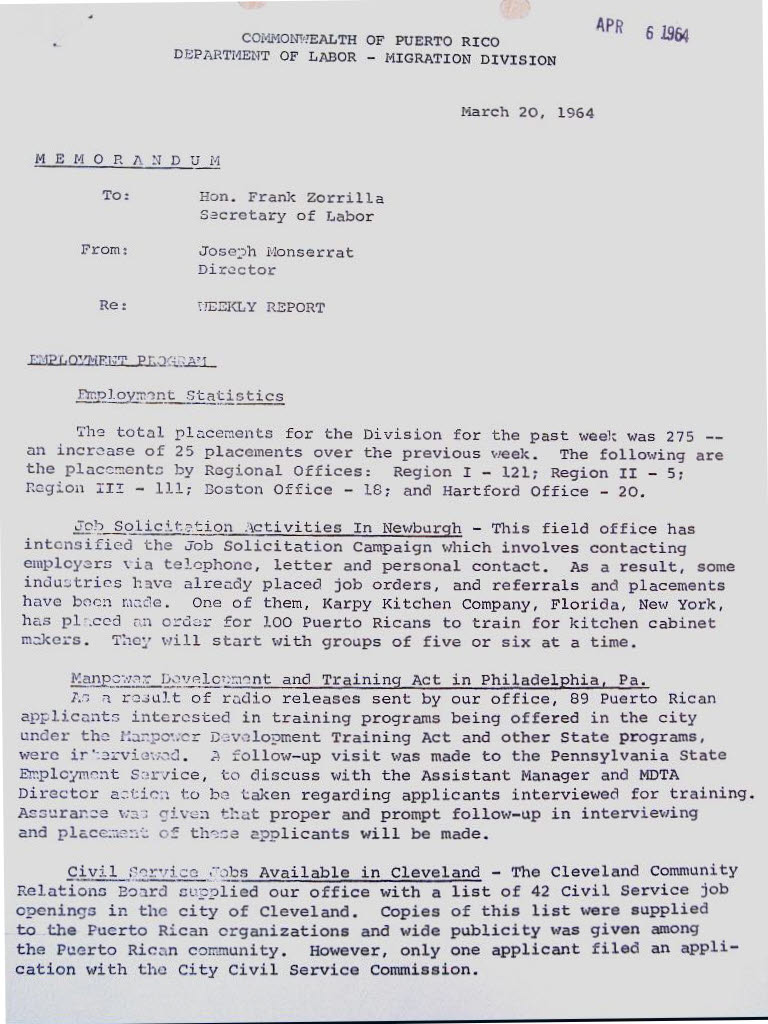 The Migration Division quickly began a dialog with the many unions that represented workers in the factories, restaurants, laundries and hotels that placed the work orders. These early efforts included internal work contacting union leaders, referring worker complaints, and providing translations. It also extended to meeting with workers and union officials facilitated by Migration Division staff.  In 1952, Teamsters Local 819 asked the MD for help in convincing workers at Arrow Novelty Shop that it was in their best interest to vote for the union. Shop chairmen Israel Garcia and Hernan Santiago tried to convince the workers to keep the union but failed. In this case, there was little the Migration Division staff could do.[8] All of this work expanded during 1957 when MD officials noted “a considerable increase in union requests for various kinds of assistance."[9]

Eventually the labor organizations learned to rely on the Migration Division, as labor organizers found that increasingly their workers were Puerto Rican. By the 1950s, the Migration Division had become experts at leveraging allies and relationships within the labor movement and could count on the leadership of Puerto Rican (and other Latino) shop-floor leaders in dozens of unions and who were now exercising their own pressure for changes from within the unions. By 1960, the list of Hispanic, mostly Puerto Rican (full time) trade unionists had grown to at least 400.[10]

As a result of this sort of work, the Migration Division staff was part of process of convergence of labor leaders, civil rights fights and public officials who monitored and responded to complaints and crises at workplaces.  Because of their daily contact with thousands of Puerto Ricans, the MD served as a clearinghouse of complaints and support requests in both directions, from the workers and from the organizations. One of the first strong early relationships was with the Spanish Affairs Committee of District 65 and with the Hotel Workers Union Local 6. By the late 1950s nearly every union local had at least a few Puerto Rican organizers and staff members, creating a network of a few dozen full time organizers (backed up by hundreds of Puerto Ricans serving as work-site union representatives) who converged at the Migration Division and the Central Labor Council.