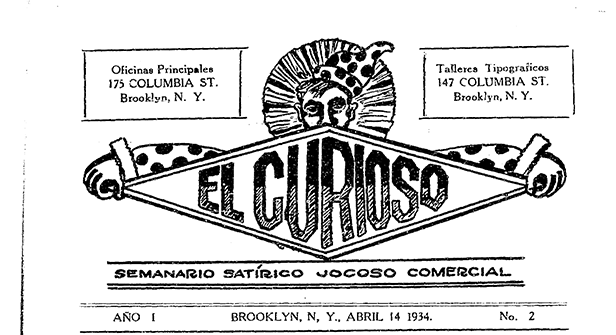 Puerto Ricans organized through the International Workers Order, the community’s largest network of politicized mutual aid clubs, held public meetings to discuss how to confront relief policies. In 1937, the “Provisional Committee, International Workers Order” called a meeting of “Latinos-Americanos” with representatives from all the community’s organizations, held at the local of the Association of Puerto Rican Employees in West Harlem’s’ Barrio (2163 8th Ave.).[8]

During the early 1930s, Hispanic workers close to the Communist Party reported discrimination, favoritism and corrupt practices in the administration of relief employment by the City.  Because of lack of clout in a traditional corrupt ethnic-based patronage system, Latinos were given the worst jobs and often treated rudely, while funds went to “ghost” employees, overpaid supervisors and internal scams.[9]

An orphan who had migrated from San Juan in 1926 because he “could see no future there,” remembered the many low wage jobs in factories for “people just off the boat” through the early 1930s—a battery factory, a hotel kitchen, a plant in Long Island, a button factory, and then 11-hour days at a mattress factory. At that factory “everyone was indignant at the terrible exploitation and we went out on strike; six months,” in 1935. When he lost his job he found “red tape, many forms” when applying for relief.  Soon he joined the Unemployment Council, the Workers Alliance and the Communist Party. Soon after, he got a WPA job paying $15/week.

Another migrant experienced similar problems. A woman from Manati had worked stripping tobacco since an early age in San Juan, but after the strikes in 1927 she lost her job and was “boycotted…fired from all the factories.” In New York, her husband, from Curacao, made only the bare minimum with his WPA job. Illiterate in both Spanish and English, she faced greater challenges than the men but was taking classes with the WPA schools, had joined the Workers Alliance, and was supportive of her husband’s membership in the Communist Party, helping him canvass in support of State Assembly candidate Oscar Garcia Rivera through the American Labor Party.

Puerto Ricans also were part of the larger responses to the Depression’s economic conditions from the left. The Worker’s Alliance marked an important instance of collaboration between Socialist and Communist Parties through their work in support of the unemployed and later as a informal union for WPA workers.[10] The Communist Party had played a big role in the first large demonstrations against unemployment and union drives in the early-1930s, but these were done in a spirit of competition and hostility towards other left and working class organizations. The Workers Alliance, a mass movement founded in 1935, recruited 800,000 members nationally in 1400 local chapters and worked to lobby politicians and Congress.[11]

Spanish-speaking workers within the orbit of both the Socialist Party and the Communist Party organized their own branches and called them the Alianza Obrera Hispana. Their goal was to organize the unemployed but also Spanish speaking workers in WPA-sponsored public works programs. In 1937, the Spanish section of the Workers Alliance organized a march of the unemployed in which 800 workers participated. It wound its way through Spanish Harlem and ended at the public assistance office in central Harlem. Frank Quintana spoke for the Communist Party and Consuelo Fuentes presented her story of seeking relief. The marchers presented a folio of complaints to the superintendent of the office.[12] The Workers Alliance Local 98 in the Bronx was also known as the Alianza Obrera Hispana and maintained contact with Vito Marcantonio’s office. It linked Spanish speakers to other workers and activists.[13] Another section identified itself as the Alianza Obrera Puertorriquena de Nueva York, while yet another identified as the Alianza Obrera del Bronx. These Alianza chapters helped set the basis for the founding of some of the IWO lodges and some of the expansive political work of the Hispanic Popular Front. One participant remembered the important social role of his Alianza chapter, which included meetings, listening to music on the vitrola, talking, eating ice cream, dances and fundraisers for “members in trouble.”[14]

Continue to Puerto Ricans and Labor Organizing during the 1930s