Puerto Ricans and Labor Organizing during the 1930s 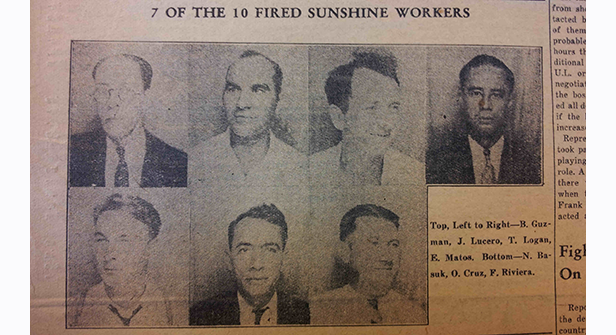 The Depression unleashed a torrent of working class organizing and protest in New York City. Both the Communist and Socialist Parties responded to the new desperate conditions, but the Communist Party connected most firmly with New York’s Puerto Rican and other Spanish speaking communities. During the early 1930s the Communist Party organized its own militant industrial unions in competition with the unions affiliated with the American Federation of Labor or those associated with the Socialist Party. The Communist Party's Trade Union Unity League (TUUL) brought together these new unions as part of its class confrontational line. The Communist Party also organized hundreds of unemployed councils, leagues and workers committees which could mobilize mass protests quickly. The Party dissolved the TUUL in 1935 when it changed to a policy of alliances with a less revolutionary rhetoric even as its activists expanded their role in the growth of industrial unions and working-class movements during the late 1930s.

The TUUL had a Spanish-speaking local “bureau” in the Communist Party’s Casa Obrera de Habla Espanola in East Harlem and a national Spanish-speaking desk in downtown Manhattan.[1] In 1931, the Party’s Puerto Rican leader Alberto Sanchez followed the radicalized line of attacking “los lideres traidores del IWW,” accusing them of being agents of capitalism.[2]  Nearly all the industries in which Puerto Ricans concentrated experienced the surge of labor and Left organizing. This included docks, ships, garment shops, metal work plants, cafeterias, hotels, cigar shops, food processing plants, and so forth. In factory after factory, Puerto Rican workers (and a growing number of Spanish-speaking organizers) mobilized in defense of workers’ ability to earn a living.  At the Eagle pencil factory on East 14th St., a Communist Party-led organizing effort included Spanish speakers. At this plant, half the workers were fired, reducing the force by hundreds. By December, all 1100 workers were on strike. Vida Obrera, newspaper of the Hispanic Section of the Communist Party, reported hearing Juan Pacheco, a Puerto Rican Communist Party sympathizer and member of the strike committee spoke to workers at their meetings at the nearby Labor Temple on the “franco optimismo de la huelga…ahora mismo salimos todos para el 'picket line’”. Pacheco reported that the police "ha castigado a una companera que hacia el 'picketing'…la companera se defendio valientemente, a pesar de que fue atacada de manera cobarde por dos policias.” At one point 150 Spanish-speaking workers were formed in two files holding out signs and singing political songs.[3]

Puerto Rican laundry workers, most of them women, also came into contact with Communist Party-led organizing for their own unions (the WTUL) during the early 1930s. TUUL organizers demanded $20 a week and seven hour days, inviting the Spanish-speaking workers to join the “Cleaners and Laundry Workers League.”[4] A WTUL led strike in 1934 received significant solidarity, including from Eleanor Roosevelt and her secret service agents.[5]

In 1930, Vida Obrera noted how many Spanish speakers had joined leftist unions as the TUUL expanded its drive to organize food, garment and other sectors. The Communist Party was astute about creating collectivities designed specifically to appeal to Latinos and Puerto Ricans. These relatively short lived efforts included the Asociacion Obrera Puertorriqueña, the Santiago Brooks (named after a Cuban Labor Leader), the Hispanic sections of the FWIU and the Needle Trades Workers Industrial union, the Hispanic section of the Anti-imperialist League of the Americas, The Liga Obrera Mexicana, the Centro Obrero de Habla Española de Brooklyn and Manhattan.[6]

The first years of the Depression led to severe reversals for garment workers and their unions. Massive layoffs meant unions lost most of their members, and wage cuts impoverished the workers. Sweatshop conditions returned to the city’s factories. Puerto Rican women (and some men) had entered the garment industry in the 1920s, but numbers grew in the partial recovery after 1932. The largest garment union was the International Ladies Garment Workers Union (ILGWU), formed in 1900 and led by Jewish socialist immigrants, to unite many unions in the industry. ILGWU Local 22 became the largest local that agglomerated the core of the industry: the dressmakers.[7]

During the early 1930s, Local 22 was in a process of recovery. The Depression reduced employment in garment dramatically, and in 1929 Local 22 had been reduced to 8000 members.[8] By 1933 The NRA and the slow recovery created conditions for a new wave of organizing.[9] The leaders of Local 22 made their first explicit appeal to Spanish speaking workers in July 1931, inviting workers to a meeting with presentations in Spanish.[10] Local 22 was led by former Communist Party leader Charles (Sasha) Zimmerman and it quickly developed a positive reputation for being a critical part of the lives of thousands of Puerto Rican and Latina garment workers. Local 22 was very successful after the 1933 general strike and organizing drive and it recruited 2000 new Puerto Rican members, increasing dramatically its Hispanic membership.[11]  The strike was a success and provided improvements: a 35-hour week, a 90/cent minimum and the prohibition of overtime (to force employers to spread out the available work to the largest number of workers). Puerto Rican women joined a growing membership within ILGWU which expanded to 200,000 including 3,000 Hispanics, 2,000 of which were in Local 22 and 700 in Local 91 (8%).[12] Local 22 had the largest concentration of Puerto Rican women in the industry.  Spanish speaking members were 6.5% of Local 22 membership in the mid-1930s.[13] At Hudson Dress in East Harlem about 100 Spanish-speaking women with extremely low wages went on strike in October 1937, spurred by the organizers of Local 22.  The workers sought to join the union and improve their wages.[14]