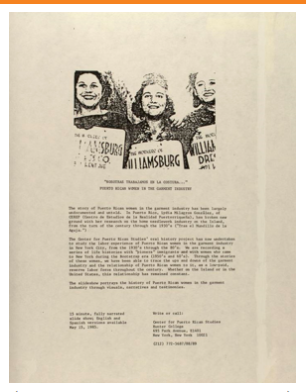 Communist Party leaders calculated that 30,000 Puerto Ricans (mostly women) worked in the garment industry around 1947 but only 10,000 of them were organized by the ILGWU or the Amalgamated Clothing Workers of America. Wages varied by experience and skill level, but some workers could make from $50 to $100 a week, the upper end of this range was among the highest manufacturing wages in New York.

The worst working conditions were in the non-union shops and these were the ones that initially received a large influx of (mostly female) migrants from Puerto Rico after 1945. These unorganized and often exploited workers in the “neighborhood sweatshops" where the shops that ILGWU fought to organize in the 1930s and 1940s because they typically (but not always) paid lower than standard wages--an ongoing process as ILGWU organizing expanded from the midtown Manhattan garment district.

ILGWU’s successes in the 1930s continued through the war years and its importance for Puerto Rican workers grew as well.  Hispanic ILGWU membership expanded to 2500 members by 1948.[11]  Spanish speakers, 90% of them Puerto Rican, were so important to the ILGWU that the union published Justicia fully in Spanish by the 1940s.  During the peak years of the migration Puerto Rican women were "streaming downtown" to garment jobs organized by Locals 22 (dresses), Local 23 (skirts), Local 91 (childrenswear), Local 62 (underwear), and Local 25 (blouses).

But ILGWU organizing still faced daunting challenges. Mob influence in the industry and corrupt practices limited the union's ability to enforce contracts and the pressure on many contractors to reduce costs and pay for mob involvement in extortion and loan sharking meant additional pressure on wages. The locals also had to constantly organize hundreds of new shops that could close and re-open with speed and ease.  ILGWU had to organize tens of thousands of new workers every year just to keep the same level of shop organizing.

By the 1950s ILGWU became an extremely large international union that organized dozens of job descriptions and work sites of dizzying variety. New York garment's trade was still the global center of the industry despite the expansion of production in other states and abroad. ILGWU had own leadership training programs and collaborated with the central high school for needle trades, where 40% of the students were Puerto Rican by the early 1960s.[12]

Learning the skills of germent work and union life depended greatly on the solidarity of other workers. In an industry that essentially barred African Americans until state legislation made it illegal in 1945, Puerto Rican entry in large numbers into the industry produced some conflicts and competition with older workers from different ethnic groups. Puerto Rican women often were rejected by Italian Americans and yet Puerto Ricans depended on these older workers to teach them and assign workloads or represent them in union issues. Bosses were interested in reducing conflict in the workplace so they would leave a lot of the mentoring work to the workers with most seniority, sometimes including the hiring.[13] All the same, the massive entry of first- and second-generation Puerto Rican women into the garment industry helped raise family incomes, as women’s wages became an increasing part of the households in the Puerto Rican community during the 1940s and 1950s and high skill workers or those in the better paid lines and specialties could earn among the highest industrial wages of the post-war decades. 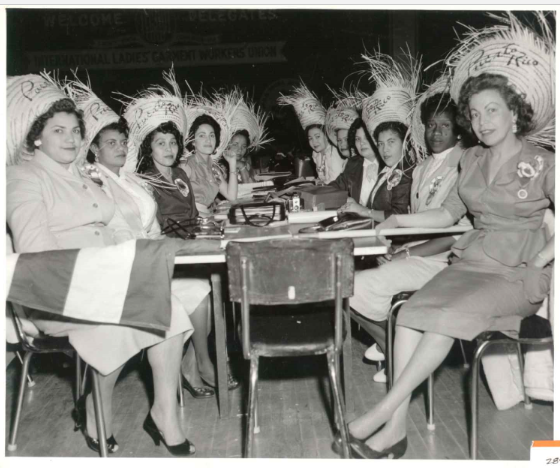 Hispanic workers were still a minority of workers in the industry through the late 1950s and the majority were post-war newcomers. The youth and recent arrival of so many of the Puerto Rican workers was also an obstacle to the improvement of their wages through higher skill and positions, but many eventually moved to earning high wages in desirable positions. The vehement ban on overt forms of discrimination by the union also helped but could not entirely remove the barriers to training either nor the quiet manifestation of ethnic stereotypes. All the same, as reflected in the many oral histories, ILGWU members usually were not only satisfied with the union’s work but also very proud to be members.[14]

ILGWU president Dubinsky ran the International in a hierarchical and paternalistic style which slowly came into crisis by the early 1960s. Puerto Ricans and African Americans complained that the vast majority of ILGWU’s large donations went to Jewish and Israeli projects (including a withdrawn million-dollar donation to a retirement home that would only take Jews). ILGWU moved to invest mortgage financing for a Rockefeller foundation housing project in Puerto Rico named after labor leader Santiago Iglesias Pantin, reserving 250 of the 400 modest houses for garment workers on the island.

ILGWU was also accused of practicing restraint in demanding wage increases in the late 1950s and early 1960s because sectors of the industry, especially those that required less skill and paid lower wage scales, were already moving out of New York City. High skill, high pay trades and the higher pay dress lines continued to disproportinatley include Jewish and Italian workers. In the early 1960s this problem became a major controversy involving the high pay, all white, and male dominated garment cutters union local 10.

Continue to: The ILGWU

[14] Herberg, Will. "The Old-Timers and the Newcomers." Journal of Social Issues 9, no. 1 (1953): 12-19; Whalen, Carmen Teresa. ""The Day the Dresses Stopped": Puerto Rican Women, the International Ladies Garment Workers' Union, and the 1958 Dressmaker's Strike." In Memories and Migrations: Mapping Boricua and Chicana Histories, edited by Vicki Ruíz and John R. Chávez, Urbana: University of Illinois Press, 2008.