Puerto Ricans and the Unions-The ILGWU 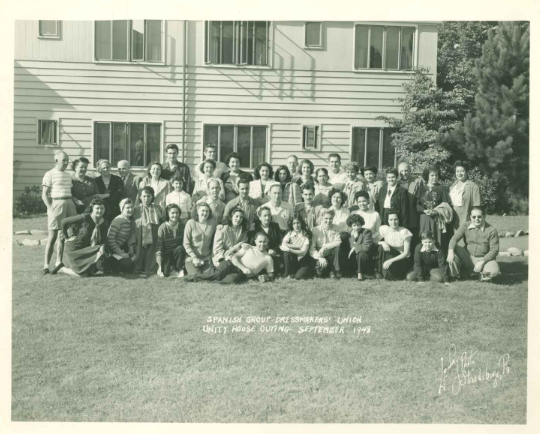 ILGWU represented workers in a slowly declining industry that lost 70,000 jobs during the 1950s. Hardest hit were the dress and shirt makers organized by locals 22 and 25, but a later wave of expansion in the mid-1960s restored some of these jobs. Locals 22 and 25 continued to have the largest concentrations of Puerto Rican workers, but by the 1950s Puerto Ricans were present in large numbers in many other locals and diverse parts of the industry including many men in the packing and hand truck areas.

ILGWU Local 22 organized the dressmakers and had the largest Spanish Speaking membership. It was the first ILGWU local to organize large numbers of Puerto Ricans in East Harlem in the early 1930s. It expanded its Spanish speaking membership to 9.9% by 1946 by aggressively organizing non-union shops and forcing employers to improve wags and conditions.[15]  During the late 1940s Puerto Ricans joined in even larger numbers and by1953 local 22 membership was 16% Hispanic.[16]  Within local 22 worksites, Spanish speakers were not disproportionately represented in lower pay categories and were able to slowly gain seniority benefits. Better pay grades were based on seniority and improved between the 1930s and 1950s.[17]

The multicultural social unionism built by the ILGWU local 22 was also an important aspect of union life for union members. Since the 1930s Local 22 (and the higher incomes and free time gained by the union struggles) provided new avenues for a shared cultural life among tens of thousands of garment workers. By the mid-1940s Local 22 had developed programs to celebrate the many cultures of its members as well as programs aimed specifically at the Spanish speaking workers.

In 1957 ACWA celebrated reaching 20,000 members, the tripling of wages in 20 years of struggle and the reduction of the workweek from 60 to 40 hours.  Like the ILGWU, the union had helped bring vacation and health benefits to some of the most exploitative industries like laundry work.[18]The challenge faced by ACWA locals was best described by Glazer and Moyniham who argued that by the 1960s laundry work was a “low-wage industry” dominated by a “Negro and Puerto Rican working force.” They concluded that the “overwhelming portion of both groups constitutes a submerged, exploited, and very possibly permanent proletariat.”[19] By the mid-1950s the ACWA Joint Board had worked to bridge its new “and considerable” Puerto Rican membership with union programs and culture.

Jose Sanchez was an ACWA business agent with the Joint Board from 1947 to 1954. He had started with the Amalgamated Laundry Workers, an ACTWU local. Sanchez was eulogized as a “pillar of strength” when he died in 1954. A former teacher in Puerto Rico, he worked in laundries and began organizing his fellow Puerto Rican workers: “Sanchez did not confine himself to serving a particular group but worked to help the entire Joint Board's membership.”[20]

Continue to: From UE to IUE