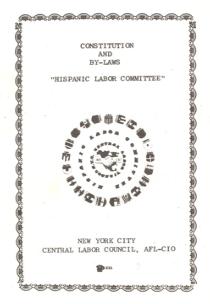 Before the start of the large post-war migration from Puerto Rico, earlier migrants and the second generation had built an extensive network of activists and organizers. The struggles led by the Communist Party, Socialist Party, Nationalist Party, American Labor Party and the larger union movement had nurtured this generation of activists which extended their influence well beyond the confines of the mature Hispanic communities of the 1940s. These alliances, at its strongest during the fight against fascism in the Spanish Civil war and during the extended Popular Front period had weakened by repressive action and ideological realignments during the late 1940s and early 1950s. Not much was left of the political organizations but the deeper struggle continued within the workers movements.  Hundreds of Puerto Ricans and many of the community’s most prominent leaders gained a political education that linked anti-colonialism to radical movements and populist languages rooted in the city’s multi-ethnic working class. These individuals would come to have a role in the working class struggles of the 1940s, 50s and 60s. These working class leaders did not limit themselves to work-related issues. They helped develop social unionism that fought discrimination and helped workers with their needs outside of the workplace. They also fought for equality and access in their communities and in larger city-wide efforts, often in alliance with African Americans, Jews and other allies. Education, cultural pride, housing, welfare rights, social services, minimum wage, even foreign policy were in this arena.

All of these efforts, including the union-led anti-racket fight had contributed to the emergence of over 400 Spanish speaking union leaders and hundreds of others shaped by leadership in the working class struggles of the preceding twenty years.

The presence of leaders in the unions was often centered in the various “Spanish speaking” committees or clubs. During the 1950s the mid-level cadre of Puerto Rican labor leaders accumulated many lessons and experience within the unions, but also a long list of complaints against the union’s hesitation to support their work as Hispanics, to demand higher positions, and support the militant efforts for Puerto Rican workers.  One of these leaders described their efforts and informal meetings as “semi-clandestine” because of their hesitation to work openly as an ethnic group.

Frank Perez and Mario Abreu were important players in this process, and their careers reflected both the support and training they had received from their unions but also the tremendous obstacles they witnessed in their efforts.  These core Puerto Rican leaders were perceived as radicals by many leaders of the Central Labor Council, partially for asserting a strong ethnic identity that focused on the emerging consciousness of the needs of the growing Puerto Rican proletariat. These men had developed in the immediate post war years a double consciousness about their role as Puerto Rican working class activists.  Frank Perez’s complaint represented well how these leaders felt about their work in the 1950s and early 1960s:  “…siempre nos usaban como un objeto, como un instrumento, sin ser parte integral de la estructura y empezamos…clandestinamente…y nos reuníamos en diferentes clubes sociales. A veces hasta en la mismas casas de diferentes personas…”[40]Harry Van Arsdale was aware of this pressure and had handled it differently in the IBEW by encouraging Puerto Rican leaders to organize separately and in explicit support of Puerto Rican goals. His support would eventually lead to the incorporation of the Hispanic Labor Council as a formal advisory body to the CLC in 1969, although many Puerto Rican union activists would have said this move came a decade too late.

Consider the career of Eddie (Edward) Gonzalez. Gonzalez, a US born worker and WWII veteran, worked in shoe factories as a “union plant” organizing Puerto Rican workers in factory after factory for the shoe workers union. He then shifted to ILGWU organizing work and after more than ten years of this sort of work joined the employment office of the Migration Division as a field investigator.  while working for the Migration Division during the mid-1950s he walked a difficult tight rope of supporting working class struggles while appearing neutral and “official.” This dance was familiar to Migration Division leaders including directors Senior and Monserrat).  Gonzalez intersected with many others of his generation, educated working class Puerto Ricans who quietly or not so quietly linked the labor movement with the newly arrived workers.  He networked with people like Fred Velez, also a WWII veteran and UAW Local 259 organizer who got the first Puerto Ricans into the Westchester high-pay auto parts factories.[41]

Paul Sanchez followed a similar path.  Sanchez was part of the second-generation Puerto Rican leaders who came through from the factories, perhaps even as they earned college degrees.  Sanchez was part of the group that networked with Eddie Gonzalez, Armando Betances, Frank Perez, Gerena Valentin and many others. Sanchez would become the first president of Central Labor Council’s Hispanic Labor Committee.  Sanchez also served as Grand Marshal of the Puerto Rican parade in 1963, only one of many examples of the importance of unions and labor leaders to the Puerto Rican community in these years.

George Santiago is another example of this generation’s working class leaders.  Santiago worked making lamps and joined IBEW Local 3. After serving in the Army in Korea, Santiago returned to factory and union work. Santiago joined the Mayor’s Committee Against Exploitation. He also was part of the group of labor leaders that created the National Association of Puerto Rican Civil Rights, the first formal Puerto Rican civil rights organization.[42]

Many leaders came also from the garment unions. Rafaela Balledares migrated as a child in 1929. After completing high school, she studied with a fellowship at a fashion school but never managed to develop a career in fashion design. Instead she worked in the garment factories starting in the late 1930s, often getting fired for complaining about conditions shared by the “cientos de mujeres puertorriquenas que trabajaban de sol a sol con limitados minutos para descansar.” Through the Woman Trade Union League, she was recruited as a union organizer for ILGWU Local 23 (Skirtmakers), training in labor studies. She organized her first ILGWU factory in 1943. At factory gates she did propaganda work for the union and would visit the women at home in the evenings to help them organize the shops.[43]

Balledares represented the ILGWU in many efforts during the 1950s. In the early 1950s she served as ILGWU representative to the Negro Labor Committee, led by Frank Crosswaith and A. Philip Randolph in Harlem. Here she joined some of the City’s most important labor leaders in an effort to help black workers organize. She was also active broadly across many sorts of organizations. She was involved in the organizing of the Fiesta Folklorica de Nueva York, a yearly festival celebrating Puerto Rican culture led by Gerena Valentin.[44]

Balledares was very involved in mobilizing Spanish speakers for the ILGWU-supported Liberal Party, the centrist vehicle for union politics that the ILGWU hierarchy created as a rival to the American Labor Party. Balladares went on to work with Puerto Rican antipoverty and civil rights organizations during the early 1960s while still working at a garment shop and after she retired in 1970 she became the organizer of the Fiestas de la Calle San Sebastian in Old San Juan, encouraged by Ricardo Alegria, Director of the island’s Instituo de Cultura Puertorriquena.[45]

Another important ILGWU leader who worked with Balladares, Frieda Montalvo, helped form The Agrupacion Femenina Latinoamericana, the more politically oriented group created out of the Agujas de Oro Latina garment workers club in ILGWU locals during the 1950s. Montalvo, also a depression era migrant, was one of the young garment workers she organized through ILGWU Local 22. She became a lifelong political activist and public administrator in City Hall.[46]

Continue to Puerto Ricans, the Labor Movement and
The fight against “Exploitation,” 1956-1965