Puerto Ricans and the Unions-From UE to IUE 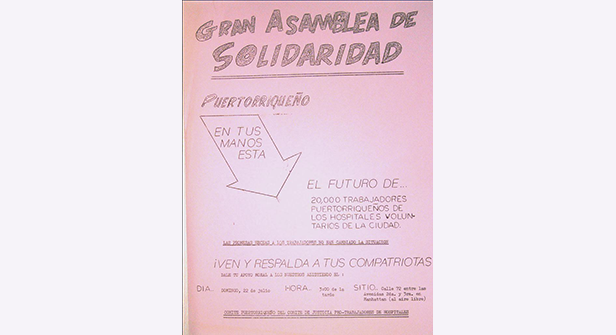 The United Electrical, Radio and Machine Workers of America (UE) was one of the most aggressively militant industrial unions with many locals in the New York region. Formed in 1937 from smaller unions it became the largest union in electrical manufacturing, Led by Communist Party members it was an important part of the CIO.  Like a few other national unions in the CIO, many of the leaders in the UE had links in the Communist Party.  The UE was especially militant in its antidiscrimination efforts during the war years, especially for black workers.  UE locals were the first to established fair employment practices committees in each local and proactively investigate the status of minorities in the workplaces they organized.  In this case, UE locals in NY were more militant in their commitment than the National organization. They established goals of employment for black workers in the city’s electrical industry, managing to quadruple the number of blacks employed in the plants they organized.[23] The UE was expelled from the CIO in 1949 as part of a larger campaign against left and communist leadership in unions. A rival union, the IUE was formed within the CIO that same year by anti-Communist leaders that broke off from the UE, inheriting or fighting for most of the former UE locals.

During the 1940s and early 1950s UE District Four Locals fought battles with the IBEW and the IUE over control of plant contracts. UE locals had a strong commitment to workplace equality and aggressive organizing of black and Spanish speaking members.

Puerto Ricans had little trouble getting entry level jobs in electrical industries and their presence increased greatly during the 1940s and early 1950s.  Puerto Ricans were disperse throughout this complex industry and well represented in skilled positions (not all Puerto Ricans in the electrical industry were recent migrants, many were second generation Puerto Ricans). Engaging in frequent membership drives in the late 1940s and through the 1950s, the UE/IUE locals already had a strong presence in the industries and shops that would soon be filled with recent Puerto Rican migrants. There was a sprinkling of hundreds of Puerto Rican workers in many plants before the great migration of the late 1940s started.[24]

In Brooklyn this struggle over affiliation played out a few years later, when continued pressure led the UE Local (and its district sisters) to affiliate with the IUE after a district-wide vote in 1956. UE local 475/485, based in downtown Brooklyn, was one of the more important New York locals of the United Electrical, Radio and Machine Workers of America (also known as UE). It maintained a leftist strategy to not only recruit Puerto Rican and other “Spanish speaking” workers as part of its routine organizing and civil rights work, but to aggressively organize mostly-Puerto Rican work sites many of which were controlled by mob-connected or racket unions. Despite the move to the IUE, the leaders of local 475/485 maintained nearly intact the rank and file oriented, left-inflected social unionism of their founders. The Local continued to operate in the tradition of UE rank and file radicalism. 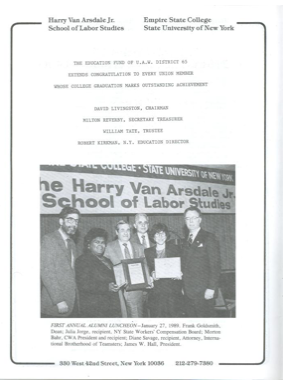 The leaders of the Local understood that the future of the labor movement hinged on its ability to organize an increasingly “minority” labor force:  “[the] fight for rights of minorities is key to unity…we can expect employers to intensify their efforts to split our unity—to set Puerto Rican against Negro and white against Negro. Our civil rights committee will have a full-time job, educating our members to understand the boss’ technique as well as working on a broad scale for an end to segregation and discrimination wherever we can.” The Local’s militant orientation toward racial justice and equality, the early incorporation and organization of Puerto Rican and other Latino workers and its continued leftist approach to social and political problems created a niche that became particularly successful in protecting at least partially the living standard semi-skilled industrial workers laboring in factories throughout the City.  As early as 1952 (merely five years after the dramatic expansion of Puerto Rican migration) the Local committed itself at its yearly convention to heightening its work on “Puerto Rican rights”.  This decision became the basis for extensive work that would culminate less than ten years later in an intense organizing drive for low wage manufacturing shops and the consolidation of a Puerto Rican leadership within the Local. As a result of these efforts the Local nurtured a  group of Black (of both Caribbean and US origin) and Puerto Rican organizers and business agents. In 1954 the Local organized a conference on the rights of Puerto Ricans and other Spanish speaking workers for all the IUE locals in the district.

Puerto Rican Executive board members, among the first in the labor to have this level of leadership in New York, received full support from the Local for their participation in the Hispanic (“Spanish”) day parade during the late 1950s. This included a delegation with decorated cars, the sale of buttons and fundraising for the event.  In 1958 Joe Salguero called for union support for the Hispanic parade in terms that fluidly link culture, national origin, civil rights struggles and working class solidarity noting the  “…importance of a big turn out from Local 485 members regardless of nationality and color in order to express our unity with our Spanish speaking brothers and sisters.”[25]  The most important sign of the Local’s commitment to empowering its growing black and Latino membership was the nurturing of Puerto Rican leaders in the 1950s culminating in the election of Jose (Joe) Salguero as Local president by the early 1960s. Angel Roman, another Puerto Rican union leader nurtured by the leadership of the Local moved to a job with the national office of the IUE.  Roman, born in Quebradillas in 1923, worked as a licensed assistant pharmacist before he migrated to the US in 1952. He worked in a Local 485 shop. [26]